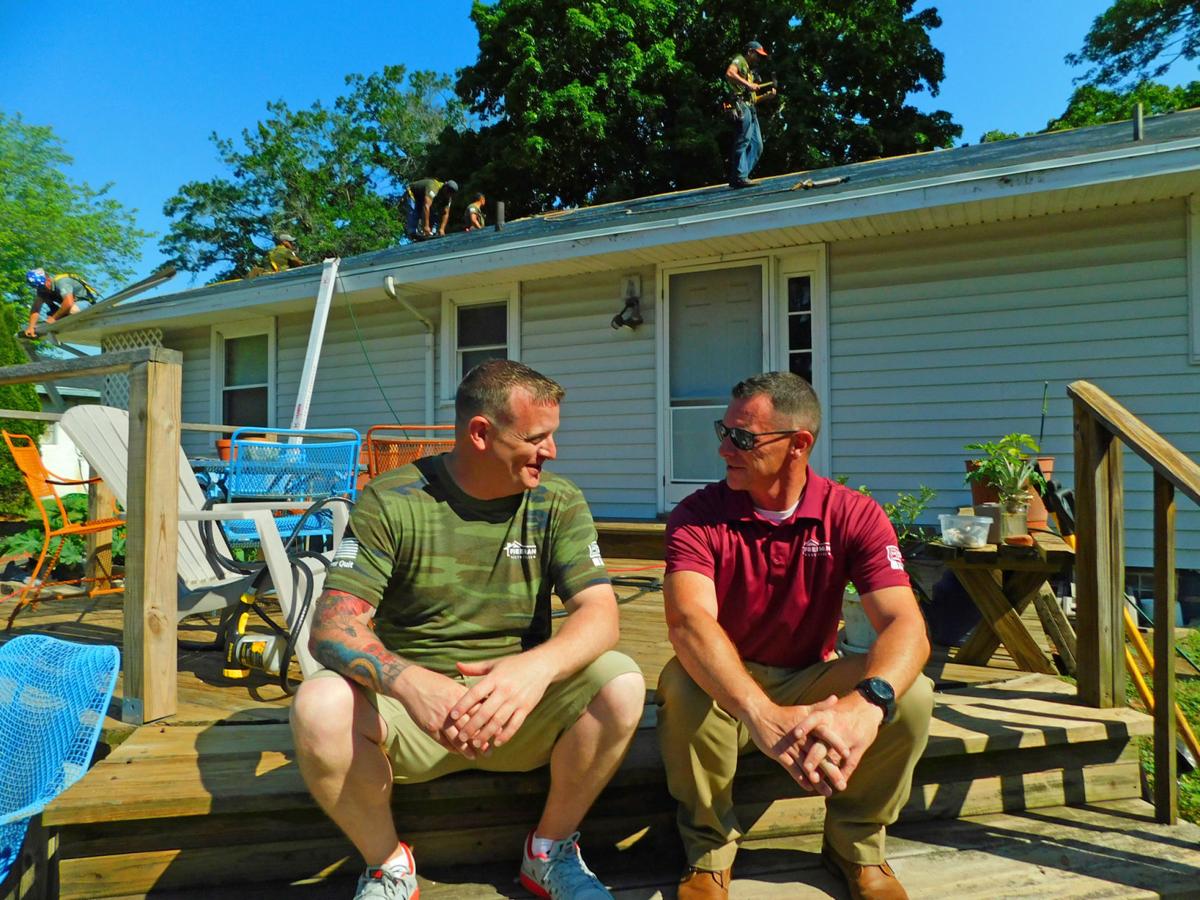 Jason Wills, left, and Brett Taflinger, sales manager with Freeman Exteriors, chat on the back deck of Wills’ home on Winter Avenue. Wills, a veteran and Purple Heart recipient is getting a new roof, thanks to a partnership with Freeman, Owens Corning and Purple Heart Homes. 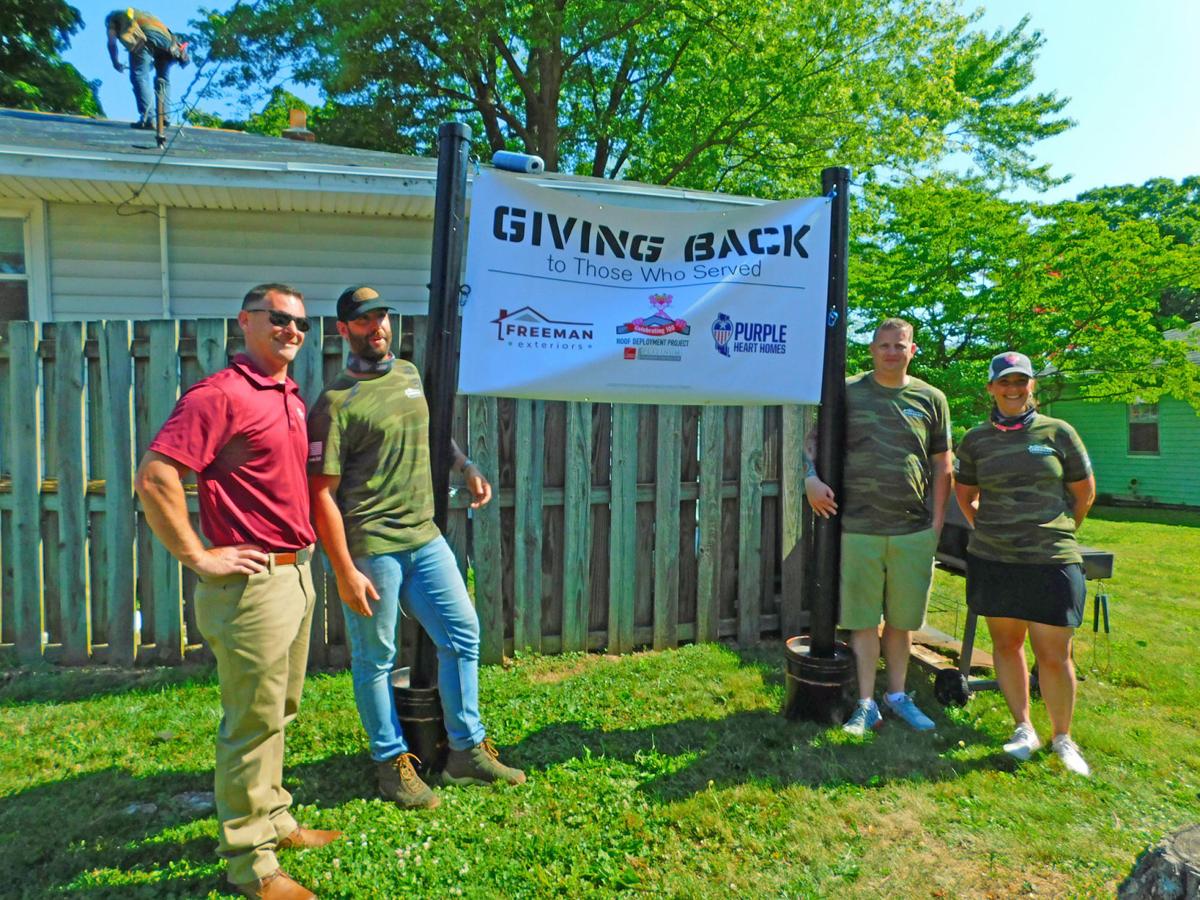 Jason Wills, left, and Brett Taflinger, sales manager with Freeman Exteriors, chat on the back deck of Wills’ home on Winter Avenue. Wills, a veteran and Purple Heart recipient is getting a new roof, thanks to a partnership with Freeman, Owens Corning and Purple Heart Homes.

DANVILLE — Jason Wills, who survived a deployment overseas, has a lot to be thankful for — including a new roof over his head.

“I’m just happy and very blessed to have people do things like this,” Wills said, as workers hammered away on top of his East Winter Avenue home.

Wills, a Purple Heart recipient, was chosen as the first veteran in Vermilion County to receive a roof as part of the Owens Corning Roof Deployment Project. The project — through a partnership with Purple Heart Homes — is a nationwide effort to honor the veterans who served the country and the families who support them.

Since the project’s inception in 2016, more than 190 military members have received new roofs across the country.

People driving by on Winter may have noticed the oversized inflatable Pink Panther in Wills’ front yard. The cartoon character is mascot for Owens Corning, which develops and produces insulation, roofing, and fiberglass composites.

For Wills’ roofing project, Freeman Exteriors of Danville supplied the labor and Owens Corning Foundation donated the materials. Freeman, which serves Champaign and Vermilion counties and the area, is a platinum-level contractor with Owens Corning.

“I’m just happy to help veterans and to give back,” said Brett Taflinger, sales manager with Freeman, who has known Wills for years. “We do it out of appreciation for people like Jason Wills who have done so much for this country.”

Wills contacted Taflinger last year to see if a hailstorm had damaged his roof, as it had so many other homes in the area. No hailstorm damage was found, but Freeman workers discovered a hole in the roof and other issues.

Wills, an Oakwood native, had bought the house 11 years ago, and he guessed the roof was 20-25 years old. So, a new one was much needed.

Some repairs were made, and a new roof was scheduled for this past February. However, that was delayed due to the weather, and delayed again due to the coronavirus pandemic.

Finally, crews climbed onto the roof Thursday, and finished the job in one day. Gutters will be installed later.

Taflinger had recommended Wills for the Roof Deployment Project last year and he was accepted.

Wills served two deployments with the U.S. Army, in Iraq and Afghanistan. In 2003, he was hit by shrapnel and suffered a head injury, and has limited use of one arm. He served with the 82nd Airborne, Fort Bragg, and is involved with the American Legion Post 210 and Veterans of Foreign Wars Post 728.

“Danville has been very good to me,” he said. “I’m very thankful.”

The roof replacement is worth $12,000-$15,000, said Clint Spidle, marketing manager with Freeman, but it will cost Wills nothing. That cost includes multiple inspections each year, high-quality materials and a 50-year warranty.

Erin Gnutek, area sales manager for Owens Corning Sales in Palatine, said of the project to help vets, “We’re grateful and blessed to be part of working with the contractor and helping veterans and giving back.

“It’s the least we can do for the sacrifices they made.”

Spidle, an 11-year Freeman employee, agreed, saying, “I’m very blessed to be part of this.”

He hopes the next recipient of a new roof could be a nurse in appreciation for her or his sacrifices on the frontlines of the pandemic.

He also hopes Freeman can be part of the Roof Deployment Project by doing two homes a year in Danville and Champaign.

At this point, people are chosen through referrals, he said, but there might be an application process in the future.

For more information on the Roof Deployment Project, or to learn more about how you can get involved, email roofdeployment@owenscorning.com.