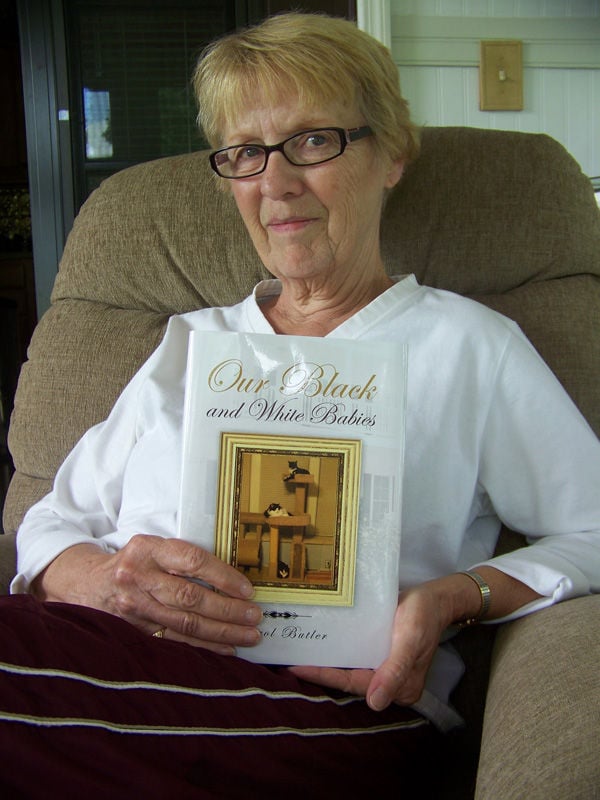 Carol Butler holds a copy of her book, "Our Black and White Babies." 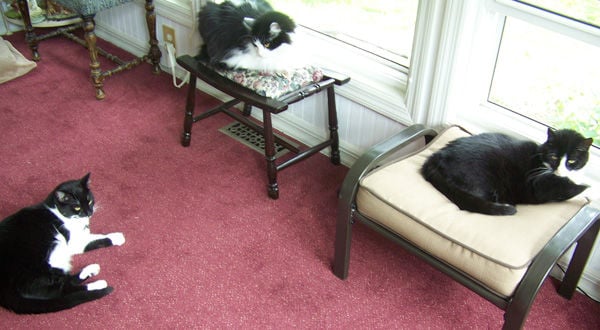 Carol Butler holds a copy of her book, "Our Black and White Babies."

What began as a scribbled journal grew and grew — and nobody even knew Carol Butler was writing a book about the pets in her life.

The result is the 60-page “Our Black and White Babies,” self-published through Xlibris.

“This was my secret,” the rural Danville woman said. “I didn’t even tell my husband until I started getting phone calls from the publisher.”

She didn’t tell her children and friends, either; instead, she recently mailed out 150 postcards announcing that the book is for sale — much to everyone’s surprise and delight.

“I’m pleased with the book,” she said. “I didn’t do it for the fanfare or the money.”

Rather, she wanted to share with the world how much the cats mean to her and her husband, John, and how much joy they bring.

The book, however, focuses mainly on three black-and-white cats that found their way into the Butlers’ home and hearts over a period of several months.

The first cat story begins on Nov. 9, 2010, when the Butlers are riding their bikes in the country and see a tiny kitten in the middle of the road. She’s totally alone, and they pick her up.

They name her Siggie Mae because she’s found near the Sygma plant.

On May 3, 2011, the couple is sitting indoors, when they notice a black animal dart under the deck. Wearing gloves, John finally captures the “absolutely wild” kitten, which had a laceration on a rear leg. They name her Blackie Sue.

Finally, on Aug. 3, 2011, a neighbor calls and says he has found a third cat, which could be related to the others. Beannie Jo also was wild, but the Butlers were able to bring her inside.

As it turned out, Beannie was pregnant, and delivered seven kittens within the next 12 hours. Four survived and found homes.

Carol thinks Blackie and Siggie are siblings; they seem to be quite fond of each other.

Whether all three kittens were born in a nearby cornfield or dumped by a callous person is unknown.

“I get outraged when I think of people dumping pets,” Carol said. “It’s being lazy on a pet owner’s part.”

There are three places in the area that will take unwanted animals — the Humane Society of Danville, Vermilion County Animal Shelter and CARA no-kill facility. There’s no excuse to dump an animal like a bag of garbage.

The Butlers didn’t think twice about opening their homes to the cats.

“There was never any time that we had any regrets,” Carol said. “They have given us so much fun. They’re so delightful to watch.”

The payoff is greater than the work, she said, adding, “We love them so much.”

Carol never started out to write a book. She was keeping a journal in a steno pad about the cats and it just grew. Last January, when she typed it out, she had 111 pages, and that’s when she decided to look for a publisher.

When she held the finished book in her hands for the first time last month, she thought, “This is my baby.” She added, “I was just real proud.”

The book talks about finding the kittens, and some of their antics — such as the time a cat or cats unraveled her knitting across several rooms. It contains several photos, as well.

Carol has notified people about the book, including the grown children, Cathy Butler of St. Petersburg, Fla., Jodi (Blu) Lindgren of Denver, and Rhett (Rhonda) Butler of Danville.

She also plans to take copies to her Westville High School reunion.

Carol retired in 2009 as a case worker with the Department of Human Services after 30-plus years. John is semi-retired as a contractor.

In retirement, they have time to devote to making their pets as happy as possible — and the cats know the world revolves around them. Now, anyone who reads Carol’s book will know that, too — and perhaps be inspired to open their own doors to strays.

“Our Black and White Babies” is available through www.xlibris.com, www.amazon.com and www.barnesandnoble.com. You also may order by calling Carol Butler at 443-3060 or e-mailing her at corkiedo@gmail.com. Hardbacks are $25 and paperbacks, $15.

The Pets column runs every four weeks. If you would like to have your pet featured, contact Mary Wicoff at 477-5161, send an e-mail to mwicoff@dancomnews.com or write to Commercial-News, 17 W. North, Danville, IL 61832.