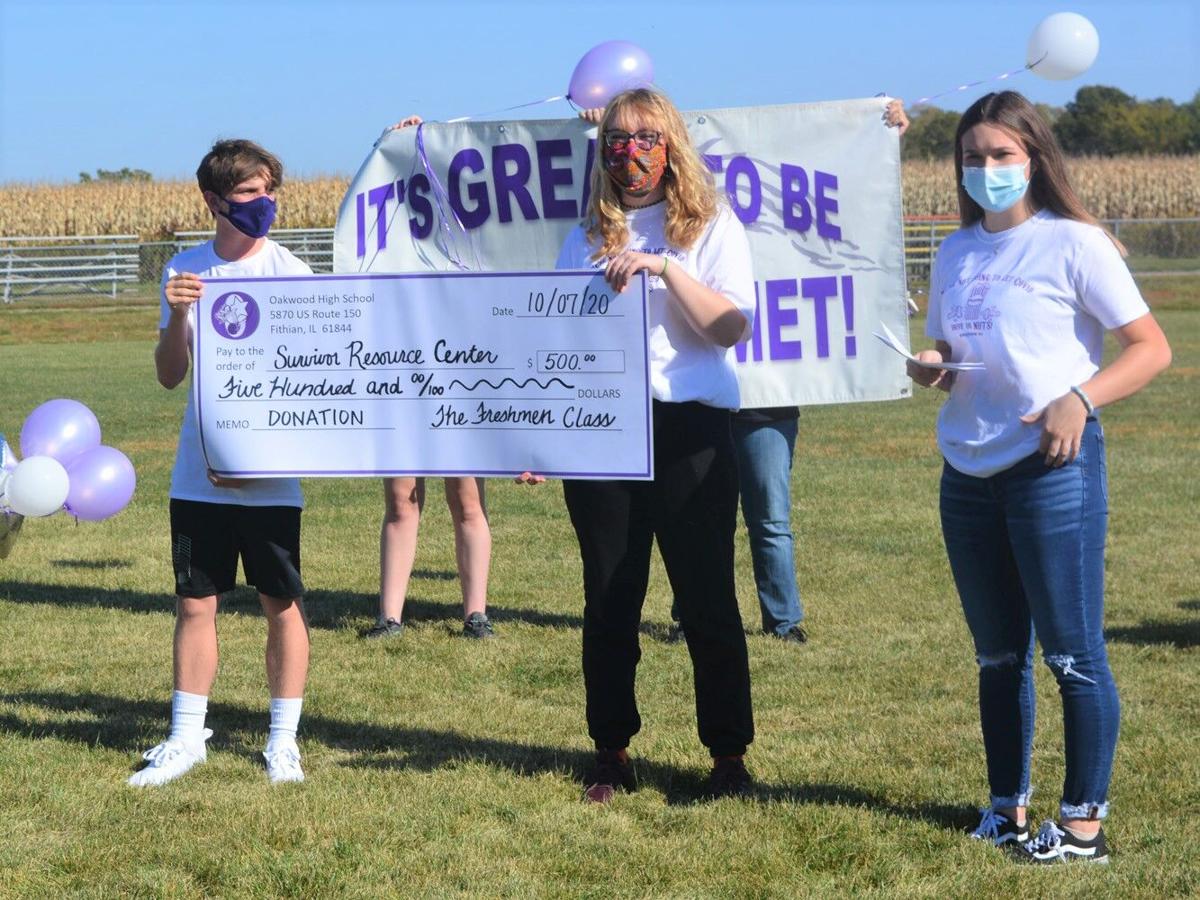 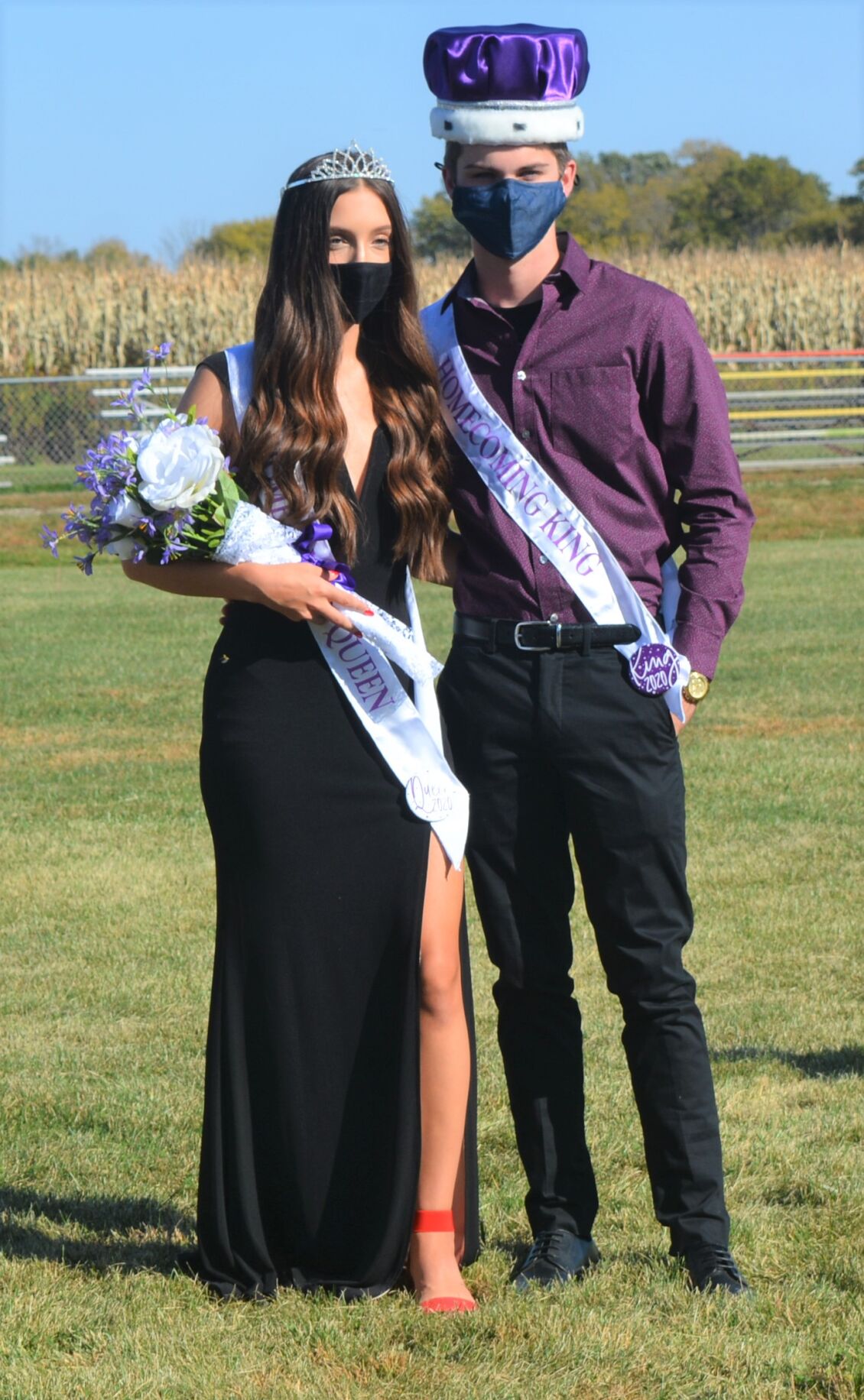 FITHIAN — While other schools in the Vermilion County area have put a halt to almost all of their fall traditions, Oakwood High School decided to keep one tradition going.

The school has been celebrating homecoming all week and on Wednesday, it had a special Comet Fest at the football field which included games for all the classes, the crowning of a Homecoming King and Queen and the decision to hand four local charities $500 each that was going to be used for floats for Homecoming.

The donations were the idea of Oakwood volleyball and track coach Lynn Anderson and student advisor Teresa Cooper.

“Teresa and I talked about it and I said since we can’t do floats, why don’t we donate our money and she had the same thought,” Anderson said. “The other three class advisors agreed that we use the money we would have used for building floats to a worthy organization. We are making it a big thing for the kids because we can’t dance, we can’t have a parade and we can’t have floats, so this is something special.”

Cooper said that the Comet Fest moved from a Thursday slot to a Wednesday slot and to the outdoors for distancing.

“We usually pack everyone into the gym and have class competitions, which can get intense between the juniors and seniors,” Cooper said. “With only 50 people allowed in a space, we could not have that, so we decided to put this on here on an off day so they can decide to attend and they can play social distancing games.”

The freshmen gave their $500 gift to the Survivor Resource Center, while the sophomores gave to the Citizens’ Animal and Rescue Adoption, juniors to the Danville VA Hospital and the seniors to CASA.

“Since they couldn’t build the floats, we decided to do something that can be done in a way that is socially distant,” Cooper said. “So we decided to give $500 from each class to a charity and encouraged each class to bring in food for the local food pantry. We are having a competition to see who is bringing in the most cans.

After the presentation of each classes’ checks to the charities, the homecoming court was announced with Dylan Bensyl announced as Homecoming king and Jalynn Bugaj named as Homecoming queen. The announcements were followed by various games between the classes.

For seniors like Ricci Arcay, it was great to not only have a Homecoming, but also a break to see people she has not seen much of so far this school year.

“We didn’t think we were going to even go to school at this time because we were thinking we were going to be all remote,” Arcay said. “We are pretty grateful to still go to school and experience things like this and see everyone that we usually see even though there is social distancing and wearing masks. I think this is good for the community, especially Oakwood who highlights homecoming week, and it is a big deal. Even if we get a small portion of homecoming, that is great.”

While everyone agrees the situation is not ideal, the chance to get together and have something in the fall was a goal and with a good attendance and a great day outside on Wednesday, the tradition kept on.

“I think it is good for the students to see that even in the surreal situation we are in, good can come from it,” Anderson said. “You can still do good things whether you are in a pandemic or not; there is always room to help people.”

“We had considered the idea of waiting to see if they will have a football season but this is such a tradition and it brings the kids together early in the year,” Cooper said. “Even if it is not the same, we wanted to do something.”

“I think this is definitely one for the books because this is something that no one expected,” Arcay said. “Even the seniors from last year had half of their year taken from them, but for us, it seems everything has been taken away. Everything is different and we just have to adjust for everyone’s health. It is something that we have to adapt to and even though we don’t want to do it, we have to.”