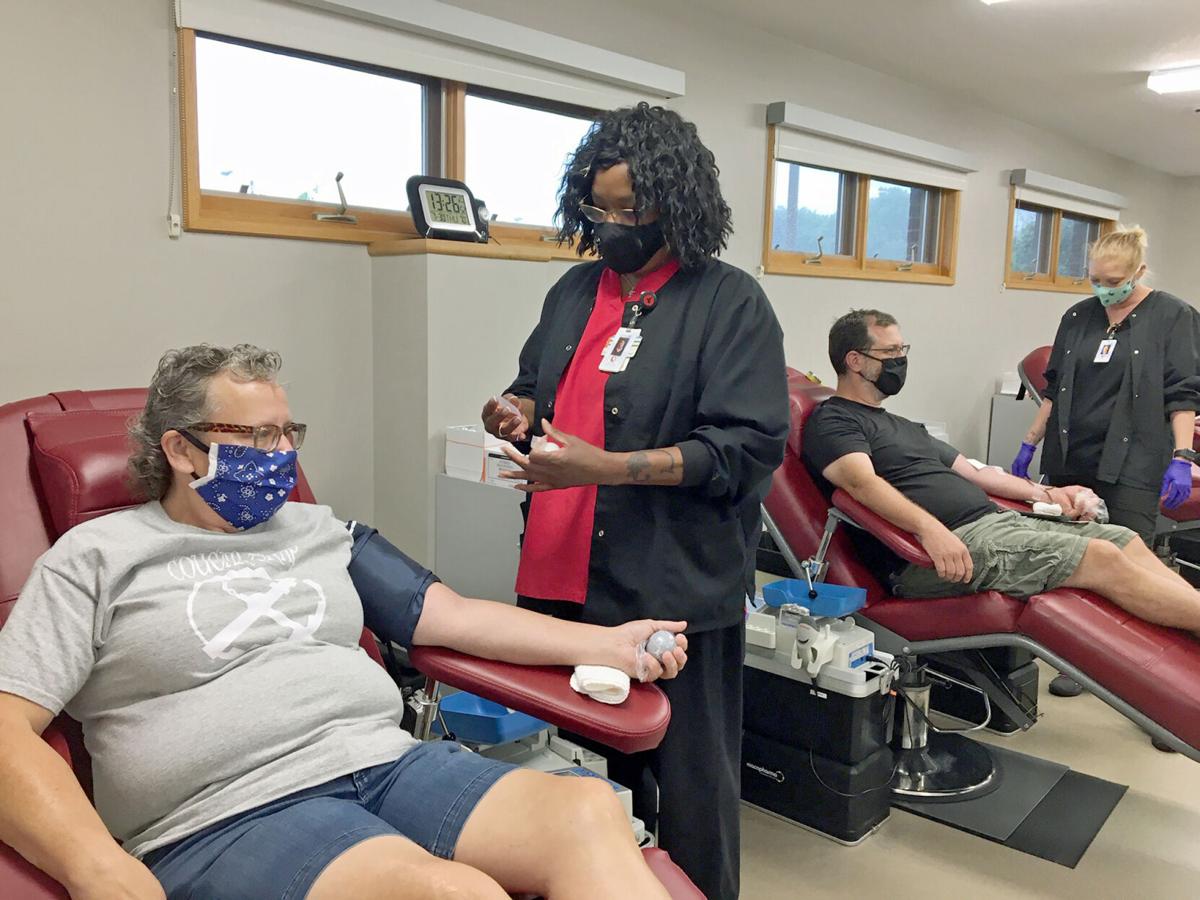 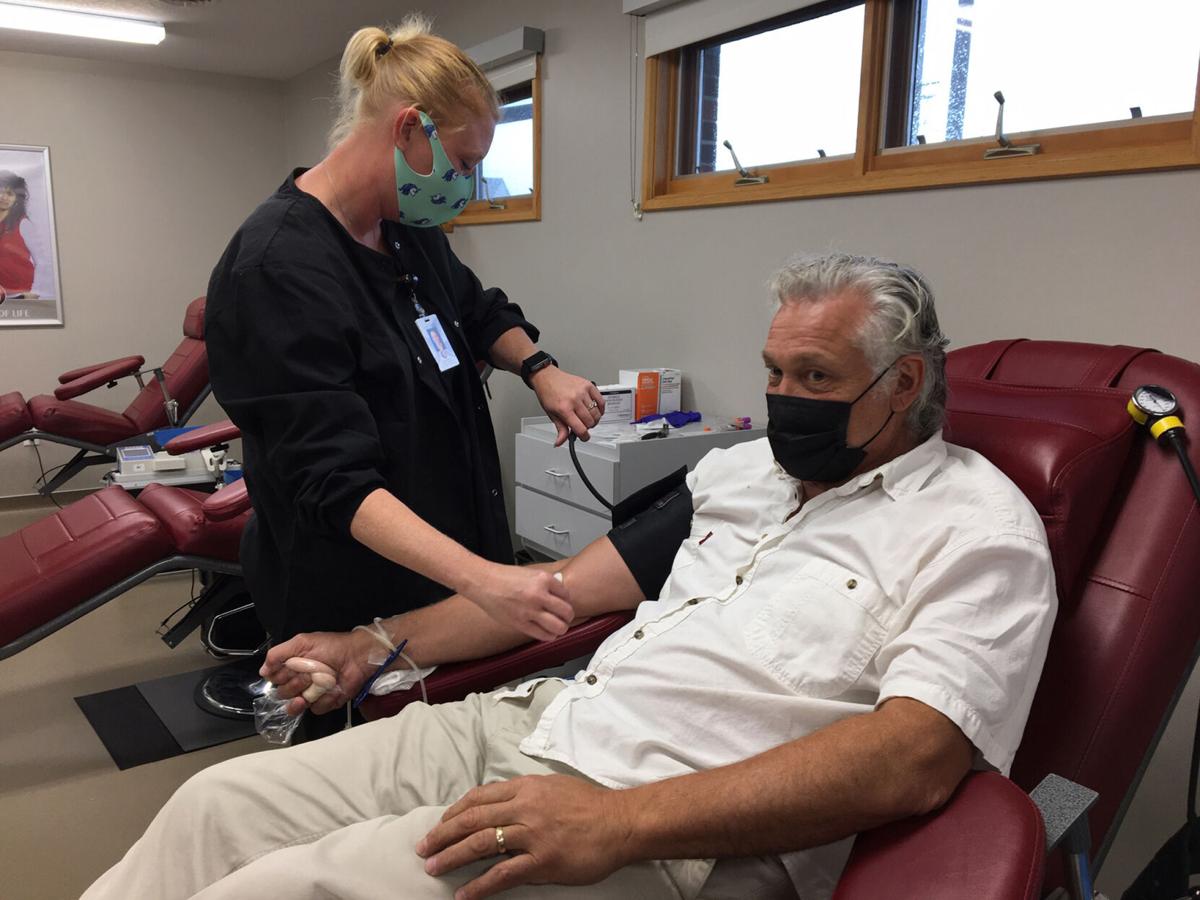 DANVILLE — If you’re waffling about donating blood, do this: Picture the face of a relative, friend or neighbor on that pint of blood. That’s how personal — and important — your donation is.

“Anybody who donates blood is a lifesaver,” said Teri McCarthy, donor relations consultant with Community Blood Services of Illinois. “It’s the equivalent of shopping local — you’re providing blood literally for your neighbor.”

Community Blood Services is the sole provider of blood to local hospitals, including OSF HealthCare and Carle in Danville and Urbana. In fact, the company provides all the blood for 115 hospitals in an area from Davenport, Iowa, down to St. Louis, and central Illinois.

“We’ve never had a need greater than we do now,” she said, explaining the concerted effort to recruit donors. “We’re fighting hard to keep up with local hospitals’ needs.”

Summer is always a slow time for donations because of vacations and school being out. However, that’s exacerbated right now due to cancelations of blood drives in the midst of the coronavirus pandemic.

Hundreds of drives were canceled between March and the end of July in this service area, which resulted in the loss of more than 20,000 units of blood, McCarthy said. Each unit of blood can help one to three people.

Therefore, that loss can impact potentially 60,000 people in this service area, she said.

In the first few months of the pandemic shutdown, hospitals had canceled elective surgeries and thus, had less need for blood. But, now hospitals are resuming surgeries, and, McCarthy said, “We’ve been clawing our way back.”

Some blood drives are resuming, too, such as those at St. James United Methodist Church and First Presbyterian Church.

At St. James, 18 people attended a blood drive on July 20 — everyone who signed up, showed up. All but one were members of the church, said Ed Hamilton, who coordinates the blood drives and also is membership manager at the church.

St. James has blood drives as often as possible, keeping in mind that people can donate only every 56 days, he said. There also was a drive on March 30, when 12 people showed up — exceeding the goal of 10 people.

Because of the pandemic, certain restrictions were in place at the last drive, such as people making appointments in advance and not entering the church until it was their turn.

“Everyone did what they were supposed to do,” Hamilton said. “It worked out amazingly well.”

Like McCarthy, Hamilton is a huge proponent of donating blood — calling it “super important” — and encourages people to do so.

Hamilton said, “If you want to give back to the community and do God’s work, this is the simplest and most effective way to help your community.”

Hamilton, who started coordinating the drives in 2011, said, “Once you start giving blood, you feel like you’ve accomplished something. It’s just one more way to help people.”

McCarthy stressed that blood donation is safe, and there is absolutely no threat of transmitting the coronavirus.

Even before the pandemic, blood banks and mobile units made sure all safety and sanitation measures were met. Now, there are extra preventative measures, such as scheduling people rather than taking walk-ins, and requiring masks and social distancing.

“It’s paramount to keep our donors and staff safe,” she said.

It’s difficult to distance on the bloodmobiles, so now there are periods of time, 10-15 minutes, between donors so everything can be sanitized.

McCarthy noted that high schools and colleges have been a good source of donations; they make up 20 percent of the donor base.

Danville High School, for example, has had four blood drives a year in the past, with a goal of collecting 80 units each time. The average blood drive collects 15 units of blood, she said.

With summer and the uncertainty of the school year, that source of donations is in doubt.

McCarthy encourages organizations, such as churches and businesses, to organize blood drives through Community Blood Services. Information on how to do that is available on the website.

St. James and First Presbyterian were among the first churches to resume blood drives, she said, adding, “We are so grateful to people like Ed (Hamilton). It wasn’t an easy decision.”

She also said, “Danville donors are the best. Once the message gets to them (about the blood staying local), they consistently step up to the plate. People have been very generous.

“We need them to continue to do that.”

Giving blood is not a one-time act; rather, the need is constant.

A unit of whole blood is good for only 42 days, she said, and that includes at least two days needed for testing it. Platelets last only five days.

If a unit of blood expires, it costs more than $100 to destroy it through a hazardous materials process.

She noted that 38 percent of the population is eligible to give blood; of that number, fewer than 10 percent actually donate. A person may donate every 56 days.

Age isn’t a concern, either. She recalled a time when a 96-year-old man shuffled up to the bloodmobile at a Danville Dans game, rolled up his sleeve and said “stick me.”

The most common blood type is O positive. However, O negative is the universal donor type, which can be given to anyone. Only 9 percent of people have that type.

“That’s gold to us,” McCarthy said of O negative.

While people might think that blood donations are needed only for tragedies, such as vehicle accidents, they forget that other accidents or procedures call for blood, too, such as falling down and breaking a bone, or a woman needing a C-section delivery.

“On every pint, there’s a face. It’s a person,” she said. “It can be your neighbor’s cancer treatment.

“We need to keep a safe and adequate blood supply to keep the community healthy. We can’t emphasize enough how important that is.”

Community Blood Services is part of the Mississippi Valley Regional Blood Center, which is the exclusive provider of blood products and services to more than 110 hospitals in Illinois, Iowa, Missouri and Wisconsin. MVRBC collects blood at 19 fixed site donor centers and at more than 5,000 mobile blood drives held each year.

The sites tell how and where to donate, the eligibility guidelines, the process, how to host a drive and much more.

Donate blood at any of the centers through Sept. 13, and get your choice of a $10 gift card.