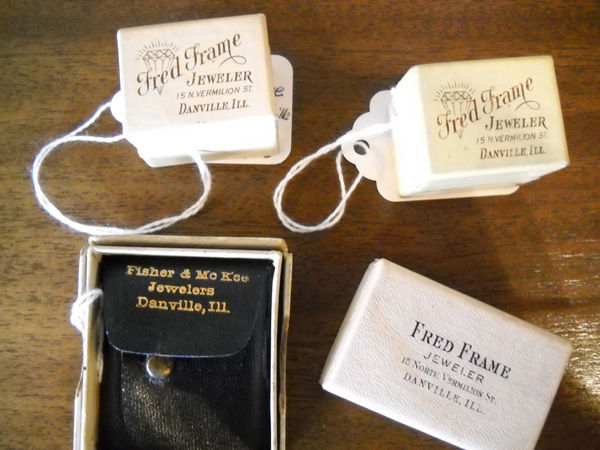 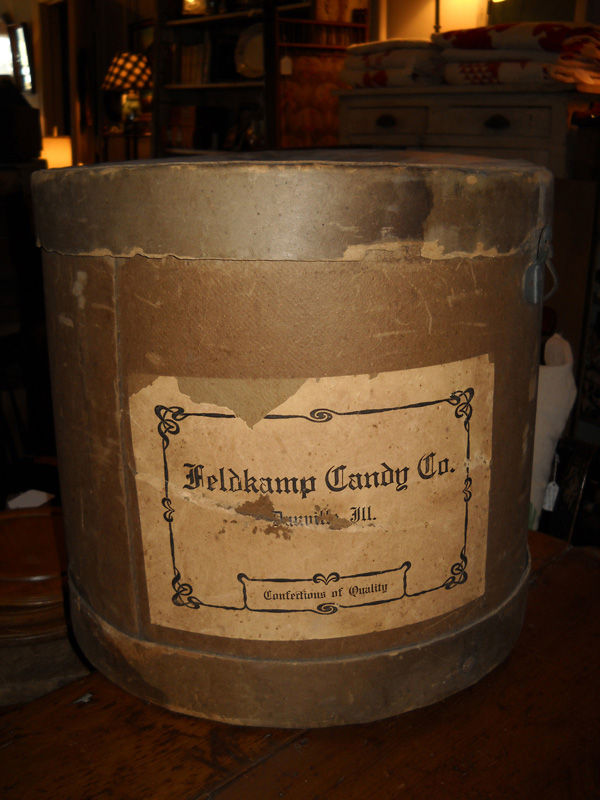 This large cardboard bucket contained candy from Feldkamp Candy Co., which was located at 36-38 N. Vermilion St. from at least 1895 until the early 1930s. 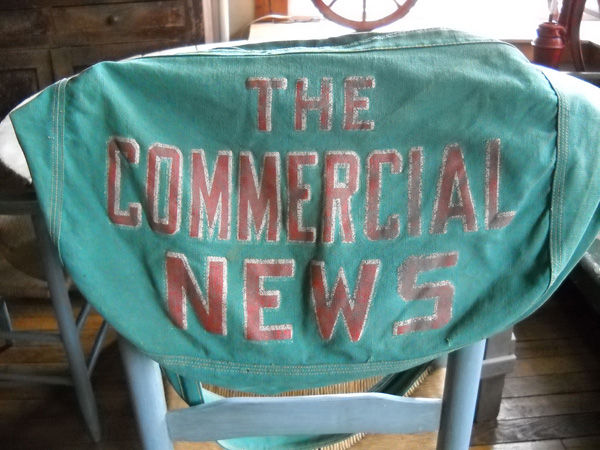 This Commercial-News paper carrier bag is from the 1960s.

This large cardboard bucket contained candy from Feldkamp Candy Co., which was located at 36-38 N. Vermilion St. from at least 1895 until the early 1930s.

This Commercial-News paper carrier bag is from the 1960s.

I’m starting to think I have a knack for spotting Danville memorabilia and artifacts when I least expect it. Earlier this month, I attended the two Country Spirit shows in Arcola that were hosted by Jill Gladney, who owns ForeverMore Antiques in Georgetown.

I stopped in my tracks at one of the shows when I saw a large cardboard bucket with an old paper label affixed to it that read: Feldkamp Candy Co., Danville, Ill., Confections of Quality. I immediately starting thinking, “Why have I not heard of this candy company before?”

I decided to visit Julie Schackmann, the seller of the candy bucket, at her antique shop, Cornerstone Antiques across from Douglas Park. Schackmann has owned the shop for 12 years, but before that, the location was home to the Nutty Nut Shop. In fact, the green shutters with the squirrel cutouts are still on the front of the building.

My morning visit proved to be quite a lesson on Danville history.

The minute I walked into the shop, I was overwhelmed by all of the Danville memorabilia, but the item that really got me excited was a green canvas Commercial-News paper carrier bag. I bought the bag but wondered when Commercial-News ever had green as its color. Apparently that was the newspaper’s official color in the 1960s, I’ve been told.

Everywhere I looked in Schackmann’s shop were remnants of Danville’s history.

“Danville in its heyday was quite a place to be,” she said.

Apparently there were many jewelry stores in the first two block of North Vermilion Street back in the day, as evidenced by Schackmann’s collection of ring boxes and advertising clocks with different jewelers’ names on them, such as Cloyd E. Trout, Fred Frame, F.P. Robey and Fischer & McKee Jewelers.

Also located in the first block of North Vermilion Street was Feldkamp Candy Co., but back in the 1800s.

After looking through some Danville city directories, I found that Feldkamp Candy Co. was owned by Charles U. and Amelia Feldkamp at 36-38 N. Vermilion St. The confectionery existed as far back as 1895, which is the oldest city directory to which I have access.

Eventually the Feldkamp family began selling insurance in the 1920s, but according to the 1930 city directory, the confectionery was still open and being run by Frank Lewis, who had added ice cream to the business repertoire. The confectionery, however, must have closed shortly thereafter because it was no longer listed in the 1934 city directory.

Back at the antique shop, Schackmann said, “I also have paper, pictures, hat boxes and shot glasses with Danville on it. I look for it.”

Perched up high on display in the shop are two hat boxes from a bygone era: one from Jules Strauss and the other from Newman’s.

Schackmann admits Danville artifacts are getting harder to come by because there is quite a bit of competition for it.

“There are quite a few collectors of Danville things,” she said. “I have five regulars who come in here.”

One of those regulars is Terry Light of Berry’s Garden Center in Danville.

Light came into Schackmann’s shop to purchase a Joe’s Tap token he had seen but, like any good collector, he first wanted to make sure he didn’t have a duplicate token from the tavern that had be located at 118 Van Buren St. After all, Light has more than 200 tokens from Danville and the surrounding area in his collection.

Tokens were a common form of currency back in the day. Grocery stores, furniture stores, cigar shops, taverns, restaurants and dairies all gave out tokens as a form of credit or an “I owe you.”

Light said he started collecting local dairy tokens and his collection snowballed from there.

“If you bought five cigars from a cigar store, you couldn’t keep all of them fresh, so you would take one or two cigars home and receive a token to redeem the other cigars at a later time,” he explained.

Light also gave this example: “Some people might have extra eggs (from their farm) so they take them to the grocery store, and the store will give them tokens” to be redeemed for groceries during a return trip to the store.

Sometimes grocery store tokens were traded at taverns for a drink, with the bar owner then using the token for groceries.

“They used them like their own currency,” he said.

The late Ore Vacketta had a rather expansive token collection and even wrote a book to help identify the tokens called, “Trade Tokens of Illinois.”

“He personally owned all the ones he wrote about,” Light said.

Does anyone else collect trade tokens or Danville memorabilia? If so, I’d love to hear from you.

Carol Roehm is the education reporter. Contact her at 477-5174 or by e-mail at croehm@dancomnews.com.

A much-loved mother grandmother and Gigi Mary Juvinsll, 77, of Danville Illinois passed away peacefully October 13th, 2020. She was loved by many and will be greatly missed. She was born September 12th, 1942 in Danville Illinois where she lived most of her life. She did however have the oppo…