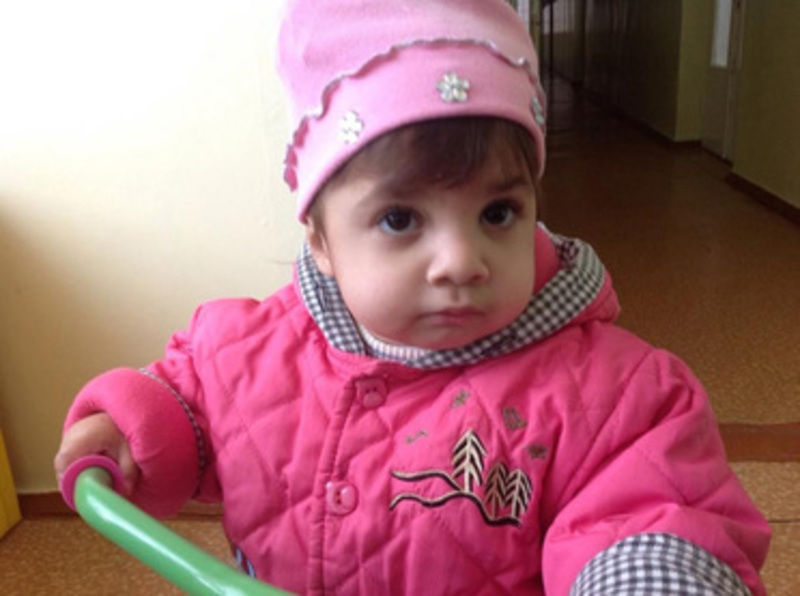 Jenni is waiting at an Ukrainian orphanage for a family to adopt her. 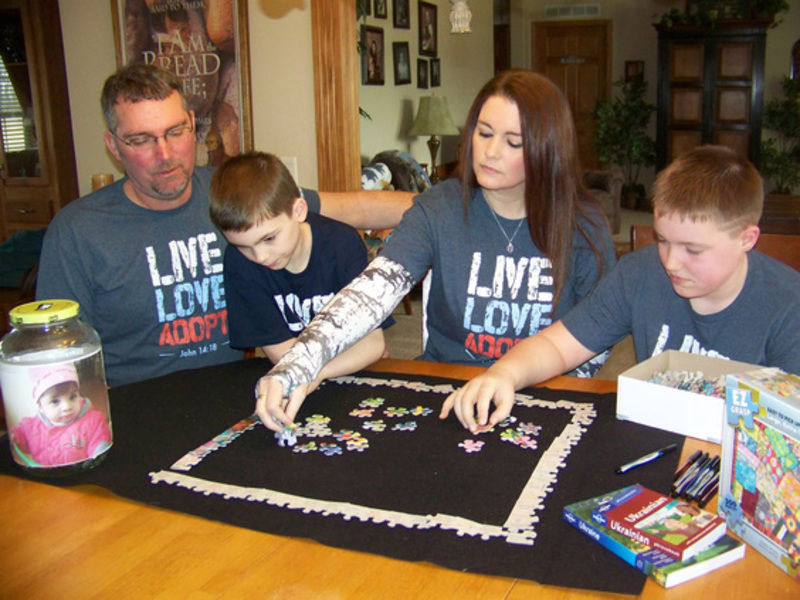 The Kunkle family works a puzzle at their home near Eugene, Ind. People may buy pieces for $10 each, and donors' names will be written on the backs. From left to right are Dale, Andrew, Buffey and Aaron.

Jenni is waiting at an Ukrainian orphanage for a family to adopt her.

The Kunkle family works a puzzle at their home near Eugene, Ind. People may buy pieces for $10 each, and donors' names will be written on the backs. From left to right are Dale, Andrew, Buffey and Aaron.

Thousands of miles away, a Ukrainian girl goes through her days in an orphanage, perhaps dreaming of a family to love her.

Half of a world away, an Indiana family has its own dreams for the girl they’ve never met -– taking her to a zoo, dressing her in frilly clothes, letting her romp in a park and taste ice cream.

“We want her to know love, and that she’ll be cherished forever,” Buffey Kunkle said.

Dale and Buffey Kunkle and their two sons can barely contain their excitement about bringing little Jenni into their rural home not far from Eugene, Ind.

The parents hope to travel to Ukraine in late April or sometime in May; in the meantime, they still have to raise money to complete the mission.

They’ve been accepting donations through Grace Haven Ministries, which is helping with the adoption process, and conducting their own fundraisers.

They’re confident the dark-eyed child will be part of their family soon.

“Love crosses oceans and knows no borders,” Buffey said. “She’s been on our hearts; we want to get her home as quickly as possible.”

Buffey’s love of children goes back to her childhood. She recalls sitting in her grandmother’s living room and watching TV programs about children in need.

“Someday, I’d like to have a big house and save all those children,” the 10-year-old told her grandmother.

After marrying Dale, they had a son, Aaron, now 13 and a student at North Vermillion High School.

In 2002, they lost a daughter when Buffey was five and a half months into her pregnancy. “This was devastating, to say the least, as we didn’t understand why God would allow this to happen,” she said.

In June 2004, after a difficult pregnancy, she gave birth to Andrew, now 9 and a student at North Vermillion Elementary.

They tried, but were unable to conceive again.

A couple of years ago, Dale and Buffey decided their family wasn’t complete, and they decided to pursue a domestic adoption.

However, one day last November, Buffey was looking at an international adoption site when a dark-haired girl in a pink cap caught her attention.

“I was immediately drawn to her,” Buffey recalled.

Jenni (an alias) was born in a small village in the mountains of Ukraine to a Roma (gypsy) mother. She is a special needs child with celiac disease, which is an autoimmune disorder of the small intestine, and will need a gluten-free diet. She also has rickets (a softening of the bones due to a vitamin deficiency) and an underlying heart condition.

Her growth has been stunted, Buffey said, adding, “She’s a 5-year-old living in a 2-year-old’s body.”

The child’s condition makes it even more urgent to get proper medical care.

Dale said Riley Hospital for Children in Indianapolis has special programs for children adopted from overseas.

Also, as part of the urgency, Buffey said there’s a disregard for the humanity of disabled children — no education, no therapy, no community, no job possibilities, lack of proper nutrition and medical care — in the orphanages.

“Orphans with special needs are often abandoned at birth because of no financial or social support,” she said. “The older orphans are targeted for trafficking when they are kicked out of the orphanage.

“The more severe the special needs are, the children end up institutionalized and don’t ever leave. Most of them die there, within a year or two.”

She added, “I have such a heart for the orphans. I don’t want any of them to hurt or suffer anymore. They need someone to love them and show them what love really is.”

After being captivated by Jenni’s wide-eyed photo, the Kunkles began the “paper pregnancy,” considered as difficult as a physical pregnancy, in a sense. They have had to fill out hundreds of pages of paperwork and get them notarized. Everything has to have a gold seal.

Because they live so close to Illinois, and could be using doctors here, they had to go through the secretary of state’s office, as well as Indiana’s.

“It’s a paper chase, even after the child has come home,” Buffey said, adding that Jenni will have dual citizenship until age 18.

The Kunkles have been in touch with other families who have adopted from overseas, including Ukraine, and visit support groups on the Internet.

Once the paperwork is completed and they’ve finished raising $16,000, the couple will go to Khmelnitsky, about five hours southwest of Kyiv.

Dale will stay just a week or two, while Buffey will stay about six weeks. It’s going to be difficult to leave her sons for that length of time, but it will be worth it in the end, she said.

The Kunkles know some people will criticize them for adopting overseas, when there’s so much need in the United States. They applied first to adopt an American child, but haven’t been chosen yet.

“No matter where you adopt from, there is one less orphan,” Buffey said.

People sometimes are overwhelmed by the enormity of the need, and they become apathetic. However, the Kunkles say, the life of even one child has value.

“It always matters to the one you touched in their helplessness and you don’t know what God has in store for that child’s life,” Buffey said.

She added, “I wonder what she (Jenni) dreams of at night? A lot of them aren’t happy children.”

Although they know it will be a challenge, the family is excited about welcoming a daughter and sister into the household (which also includes rescued pets). They’ve even adopted a Lab puppy, who will be trained as a therapy dog for Jenni.

They rattle off numerous activities they want to introduce her to -– smelling flowers, watching a movie, visiting the zoo, going to Walt Disney World, sleeping in her own bed.

Aaron said he has wanted a sister for a while and is eager to teach her how to play basketball.

Andrew is excited about becoming a big brother and wants to play Legos with her. He added, “I want to show her kindness ... love ... and strength.”

“The boys will protect her,” their mother said. “They talk about it all the time.”

“We want this whole experience to glorify God and complete the family,” Buffey added. “I can’t wait to see her flourish in America.”

The Kunkles, who attend the Rock Church, have a strong faith that this is what they were meant to do.

That biblical passage says, “I will not leave you as orphans. I will come to you.”

Other favorite passages are Hosea 14:3, which says “For in you, the orphan finds mercy” and James 1:27, which encourages people to look after widows and orphans.

Ukraine is in a fragile state now, and that means the orphans are on lowest priority, Buffey said, adding that food shortages have been reported.

“We ask the community to pray for the orphans of Ukraine and to lift up the orphans in Russia, who no longer have the option of being adopted internationally,” she said.

A much-loved mother grandmother and Gigi Mary Juvinsll, 77, of Danville Illinois passed away peacefully October 13th, 2020. She was loved by many and will be greatly missed. She was born September 12th, 1942 in Danville Illinois where she lived most of her life. She did however have the oppo…