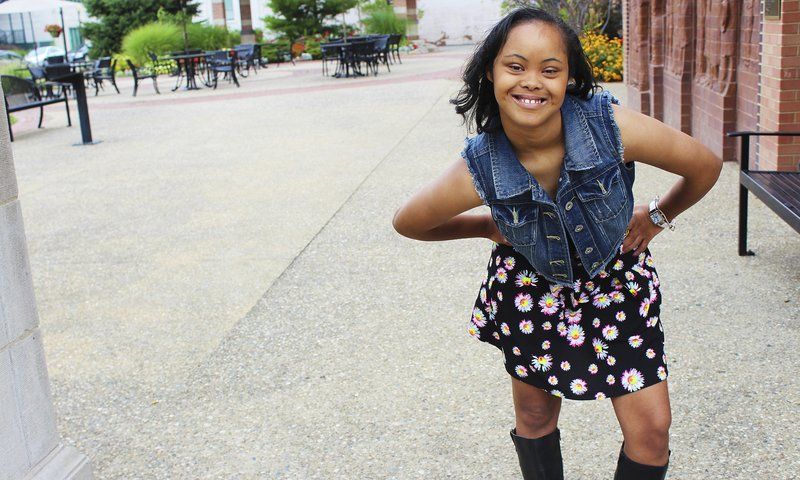 Ghaliyah "GiGi" Cunningham is a spunky 17-year-old who loves to sing, dance and model. She has big dreams of going to college and being famous some day. 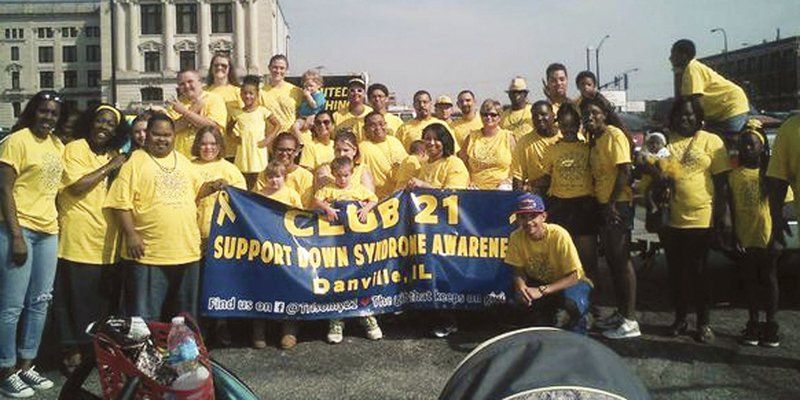 Photo ProvidedMembers and supporters of Club 21 gather for a photo after participating in Danville's Labor Day parade.

Ghaliyah "GiGi" Cunningham is a spunky 17-year-old who loves to sing, dance and model. She has big dreams of going to college and being famous some day.

Photo ProvidedMembers and supporters of Club 21 gather for a photo after participating in Danville's Labor Day parade.

When Ghaliyah “GiGi” Cunningham was just 3 months old, doctors told her mother, Erica Butler, she might never be able to walk, talk, or lead a productive life when she was diagnosed with Down syndrome.

Seventeen years later, GiGi not only walks and talks — she sings, dances and has a serious knack for striking a stunning pose and strutting down runways.

In 2007, the Commercial-News published a story about GiGi and her mother titled “Mother makes sure daughter beats the odds.”

In the last year, the Danville High School sophomore has been busy working hard and chasing her dreams of being a model and changing the way the world sees her and all the other kids with disabilities.

GiGi was modeled in Chicago for Project Captured and Changing The Face Of Beauty. In July, GiGi lit up the stage at Danville Light Opera with her singing and dancing as an orphan in "Annie Jr."

This fall, GiGi and her mother have worked to start a group — Club 21 — to advocate for other children with special needs. She recently was selected to be one of three representatives for the Buddy Walk, a National Down Syndrome walk for awareness.

Soon, GiGi’s sparkling brown eyes and contagious smile will light up on a billboard in Champaign to promote the Down syndrome awareness event.

In June, GiGi’s dream as an aspiring model came to life when she was selected to model in the Be Beautiful Be Yourself Fashion Show in Denver, where she will be striking poses and striding the runway next to celebrities in October.

Needless to say, GiGi is beating the odds — all odds — and not stopping anytime soon.

Raised to stand out

No mother wants to hear the news her child has a disability and won’t be able to live a “normal” life.

Butler refused to see GiGi’s Down Syndrome diagnosis for all the things she couldn’t do.

“What is normal, anyways? I’ve always taught GiGi it’s OK to be different. And that her disability shouldn’t stop her from doing what she loves,” Butler said

Butler, a pancreatic cancer survivor, said she has learned to count her blessings, not her losses. And her beautiful, bright daughter GiGi has been a blessing since birth.

“I’ve been given a second chance at life and I just want to advocate for kids with special needs — to tell them to go out there and follow their dreams,” Butler said. “Life is too short.”

"We shouldn't shun (kids with disabilities) because they are different," she said. "Put them in the spotlight and let them shine."

Ever since she was a toddler, GiGi has had an uncanny ability to light up a room and make people smile, especially when a camera is around.

“She has always had a knack for being in front of the camera and has always loved to sing and dance,” Butler said. “It’s just been her way of expressing herself.”

Now as a teenager, GiGi is soft spoken and shy in a lot of social settings, but when a camera is on GiGi lights up like a firework from her smile to her sparking eyes. She transforms into a self-assured young woman who swings her hips, tilts her head, adjusts her face and widens her eyes when the camera flashes.

GiGi also has loved school since she was little. Butler did everything she could to ensure her daughter would learn to communicate and develop from the time she was little. She researched Down Syndrome, a genetic condition that causes intellectual disability, developmental delays, and often many health defects such as heart problems, obesity and hearing loss and did everything she could to help her daughter learn, develop and grow, despite her disability. Butler taught GiGi sign language before she learned to verbally communicate at age 5.

It paid off. GiGi now takes both special needs and regular classes at Danville High School. GiGi wants to attend college one day.

“I have always taught GiGi to try and try again, from the beginning,” Butler said. “I’ve learned that you can’t assume your child can’t do something just because they have a disability. You let them do as many things as they can and they will amaze you.”

“She said I was good at it,” GiGi said with a smile. She said that made her feel “good inside.”

That was a game changer for GiGi, her mom says.

Butler was so proud and overjoyed when saw the way her daughter smiled and shined when she was on stage.

“Her confidence level goes up every time she’s on stage or in front of a camera. She’s usually really shy at first. She’s coming out of her shell a lot,” Butler said.

Butler could sense something was wrong with GiGi her freshmen year at Danville High School when he would come home with a defeated face. She was quiet, and wasn’t singing and dancing in her room, which she calls her studio, nearly as often.

“She kept coming home upset and I found out a group of particular girls at the high school were picking on her,” Butler said. “I taught her that it’s important to tell someone when this happens so we can make it better and to walk away from anyone being mean to her.”

GiGi was raised that it was OK to be different and that her disability made her different in someways, but that was OK.

She is different. She’s a genuinely happy child who, when asked what she wants to do this year, says “I want to work at McDonald’s” with a golden and sincere smile. She loves folding clothes and wants to work in a nursing home some day because she loves to help people and feeling essential. GiGi’s large, bold and pure heart might be her most distinctive feature — filled with so much love and kindness for others. GiGi doesn’t have any mean bones in her body.

Not all high school students, unfortunately, see that GiGi’s different attributes and characteristics are different in a great way.

“Kids at the high school bullied her,” Butler said. “They didn’t understand her disability I think because they aren’t educated on it and not a lot of kids that look or act like GiGi are in the media or in the spotlight.”

Butler said the bullying has subsided in the last few years, thanks to GiGi’s confidence increasing the more she is on stage and on camera.

“Kids are seeing her more and more on social media posts and in plays and they understand her more and see how beautiful she is,” Butler said. “It has really helped."

Butler’s ultimate goal for GiGi, like any parent, is for her daughter to be independent and confident and to live a fulfilling life.

Butler wants to make things easier for her daughter, and other children with disabilities to be accepted and feel good about themselves.

Butler feels like her daughter’s growing success as an aspiring model will not only help GiGi gain confidence and live a fulfilling life, but will inspire other children with disabilities to follow their dreams and do what they love.

GiGi flies to Denver next month to model in the 7th annual Be Beautiful Be Yourself Fashion Show at the Colorado Convention Center on Oct. 24 for the Global Down Syndrome Foundation fundraiser. The fashion show is staged annually in October in observation of Down Syndrome Awareness Month. The celebrity gala is the largest single fundraiser for Down syndrome in the nation, attracting more than 1,200 guests each year.

“This is a dream come true for my daughter,” Butler said. “And it shows other kids with disabilities to follow their dreams and not let their disability define them.”

To see what GiGi is up to next and follow her journey as an inspiring model, check her out on Twitter @bentley1royce2.

Club 21 is working to make the world better, one hug at a time. Club 21 is a group of dedicated parents who want to ensure that our children’s needs are met. The goal is to improve Down syndrome awareness in Danville and surrounding areas.

Club 21 members are interested in networking with surrounding companies and special needs homes and services to make sure everyone has an opportunity to let the world know that our kids are "more alike than different."

Meet GiGi — a fearless and fun 17-year-old from with Down Syndrome, but certainly doesn’t let it stop her from chasing her dreams and doing wh…