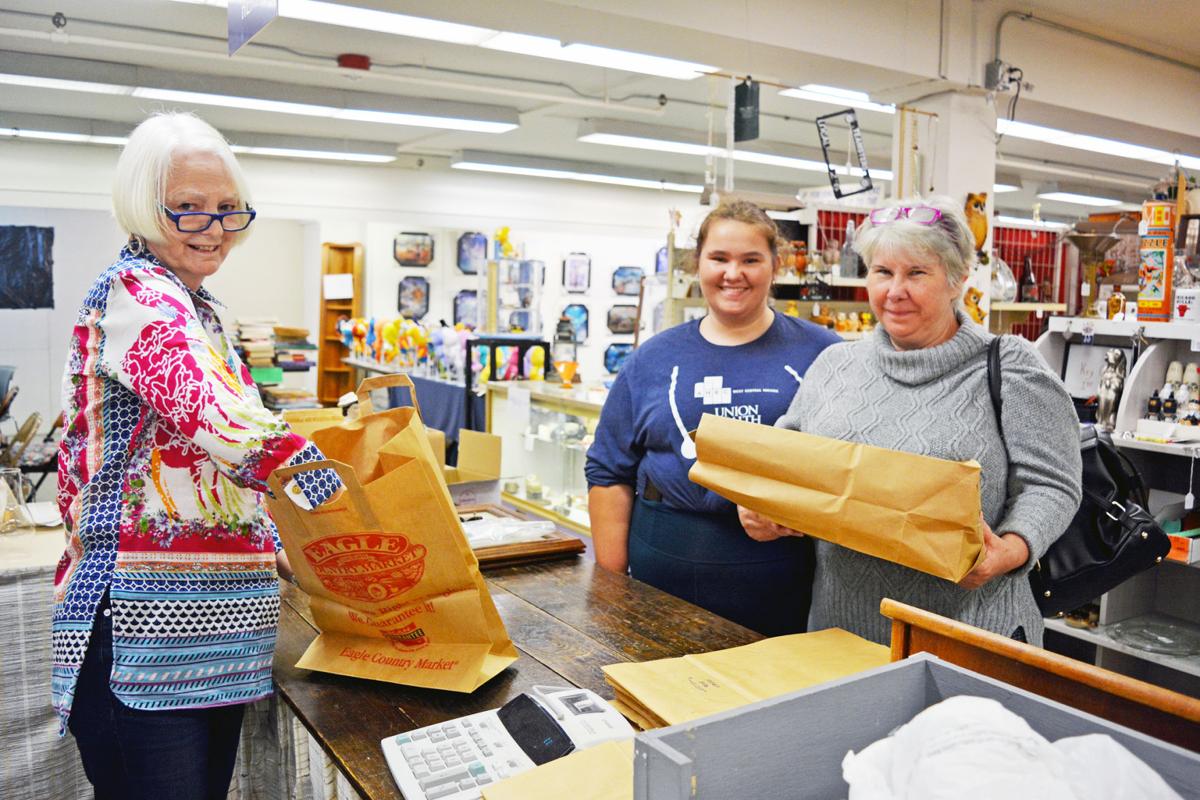 Mary Donna, manager of Heartland Fair, fills a bag with merchandise as Allie DeRoeck (center) and her mother, Trudy Wolf, all of Covington, Ind., purchase a bag full of treasures during the last days of the Heartland Fair. 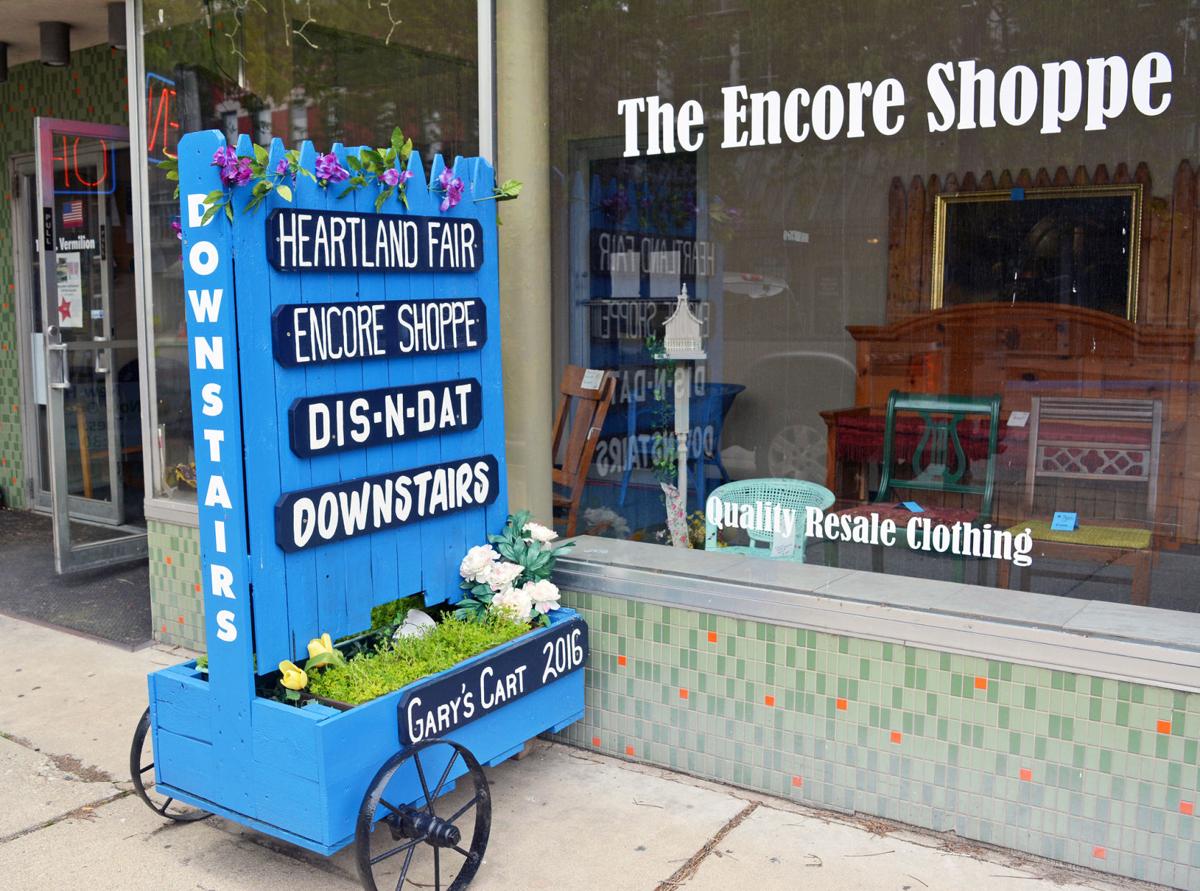 Heartland Fair, a landmark in downtown Danville, will close May 30 after 27 years in business.

Mary Donna, manager of Heartland Fair, fills a bag with merchandise as Allie DeRoeck (center) and her mother, Trudy Wolf, all of Covington, Ind., purchase a bag full of treasures during the last days of the Heartland Fair.

Heartland Fair, a landmark in downtown Danville, will close May 30 after 27 years in business.

DANVILLE – Heartland Fair, a downtown Danville mainstay for the last 27 years, is closing its doors Saturday.

The business, located in the basement of what once was Sears at 126 N. Vermilion St., is home to 18 vendors who sell antiques and collectibles and is also the site of Encore Shoppe clothing.

Heartland Fair’s departure will leave a large void in the streetscape of downtown Danville.

“We’ve been here longer than any other downtown business, except for Merle Norman. They’ve been here 40 years,” said Mary Donna of Covington, Ind., who runs the Encore Shoppe and manages Heartland Fair.

Ken Gentrup, one of the owners of the nearby Glory Daze antiques shop, said, “I hate to see them go. It will be another empty building downtown.”

Heartland Fair, however, is not a small-business casualty of COVID-19, but rather a culmination of unresolved issues with the building’s new owner who lives in California.

“The virus wouldn’t have shut us down,” Donna said.

“We would have never closed, but we have a new landlord, and he wanted to raise the rent and have us pay more toward the utilities even though we don’t have air conditioning, a furnace or an elevator,” she said. “We’ve been here 27 years, and the elevator hasn’t worked for 20.

“We hate to leave, and we wouldn’t have left,” she said, but added that the disagreements with the new owner were insurmountable.

Gesiele “Jill” Mockabee, owner of Dis-N-Dat beauty supply that has been located in Heartland Fair for more than four years, agreed with Donna.

“We pay our rent on time, but he wanted to double our rent,” she said. “We’ve tried to reason with him.”

The ownership of the Heartland Building, which houses the Heartland Fair, changed hands most recently in October. Donna and vendor Ralph Niccum say the new owner bought the building sight unseen.

Niccum agreed. “The guy has never seen the building.”

News of Heartland Fair’s impending closure spread like wildfire on social media. Instead of asking the vendors to pack up their antiques and collectibles, Donna decided to quietly open the business and offer treasure hunters — many of whom have been loyal customers over the years — one last chance to grab items at deeply discounted prices.

“I hate leaving my customers and my work family,” Donna said as she rung up a sale.

“This is like home. We’re like family,” customer Ginny Mann said. “When I need to get away, I come here.”

As Mann started to walk away from the sales counter for possibly the last time, Donna said what only would make sense during a pandemic, “Pretend that I hugged you. I love you, Ginny.”

Reta Lamb of Danville, who was setting aside glassware and other items she planned to purchase, said she will always have fond memories of shopping in the bargain basement with her daughter, Jessica.

“I have so much in my home that I bought over the years from here,” Lamb said. “Some of my greatest winter coats have come from here. This is very sad.”

Trudy Wolf and her daughter, Allie DeRoeck, both of Covington, Ind., also made one last outing to Heartland Fair.

“This was a fun mother-daughter thing to do,” Wolf said. “We’d come here and pick up treasures.”

When Heartland Fair closes, the only occupant left in the building will be Alpha-Omega Counseling Services. Dis-N-Dat is in the process of relocating to the former Courtesy Loans storefront at 121 N. Vermilion St.

“Dis-N-Dat is moving across the street, and two vendors are setting up small booths at Rabbittown (Antiques and Artisans),” Donna said. “The rest of us are retiring.”

Carol Ford, who has been a Heartland Fair vendor since 2003 selling glassware, collectibles and primitives, said, “We’re going to retire. We’ve been at retirement age for a while, but this was fun.”

72, of Bismarck, died July, 2, 2020 at IU Health Ball Memorial Hospital in Muncie, IN. Arrangements are Pending at Sunset Funeral Home in Danville, IL.