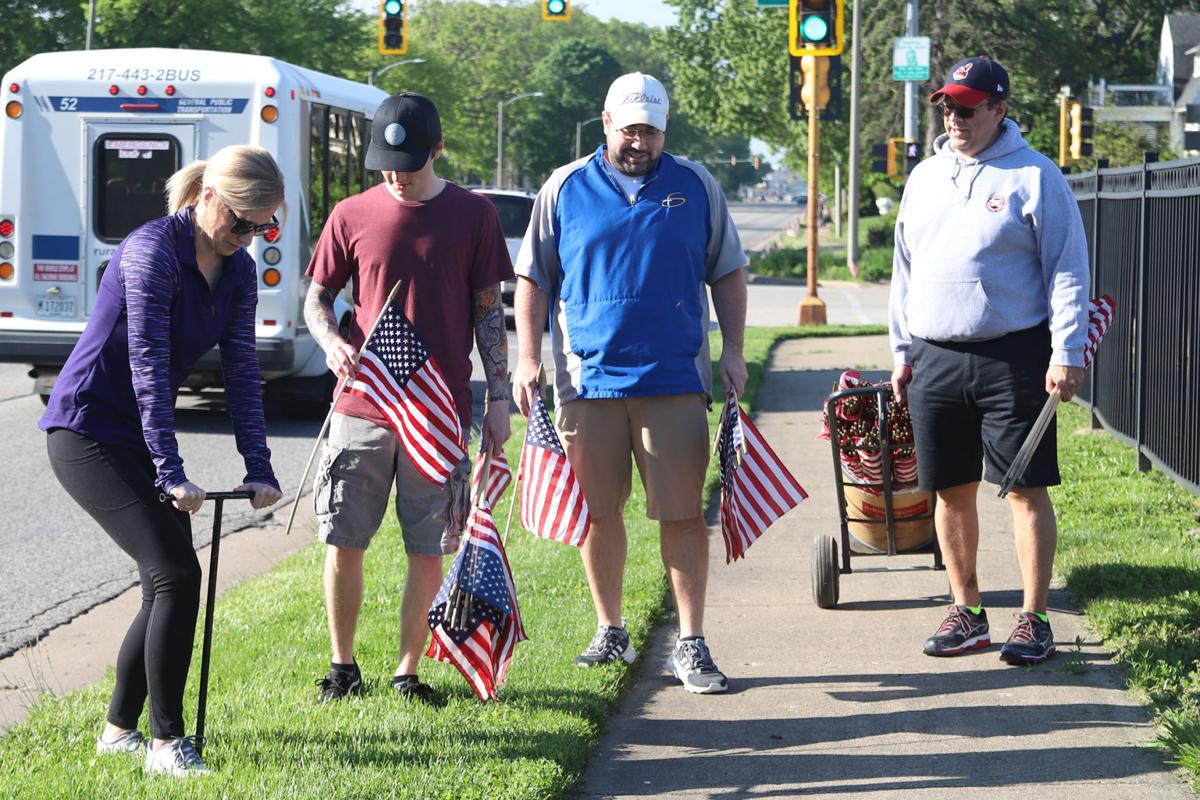 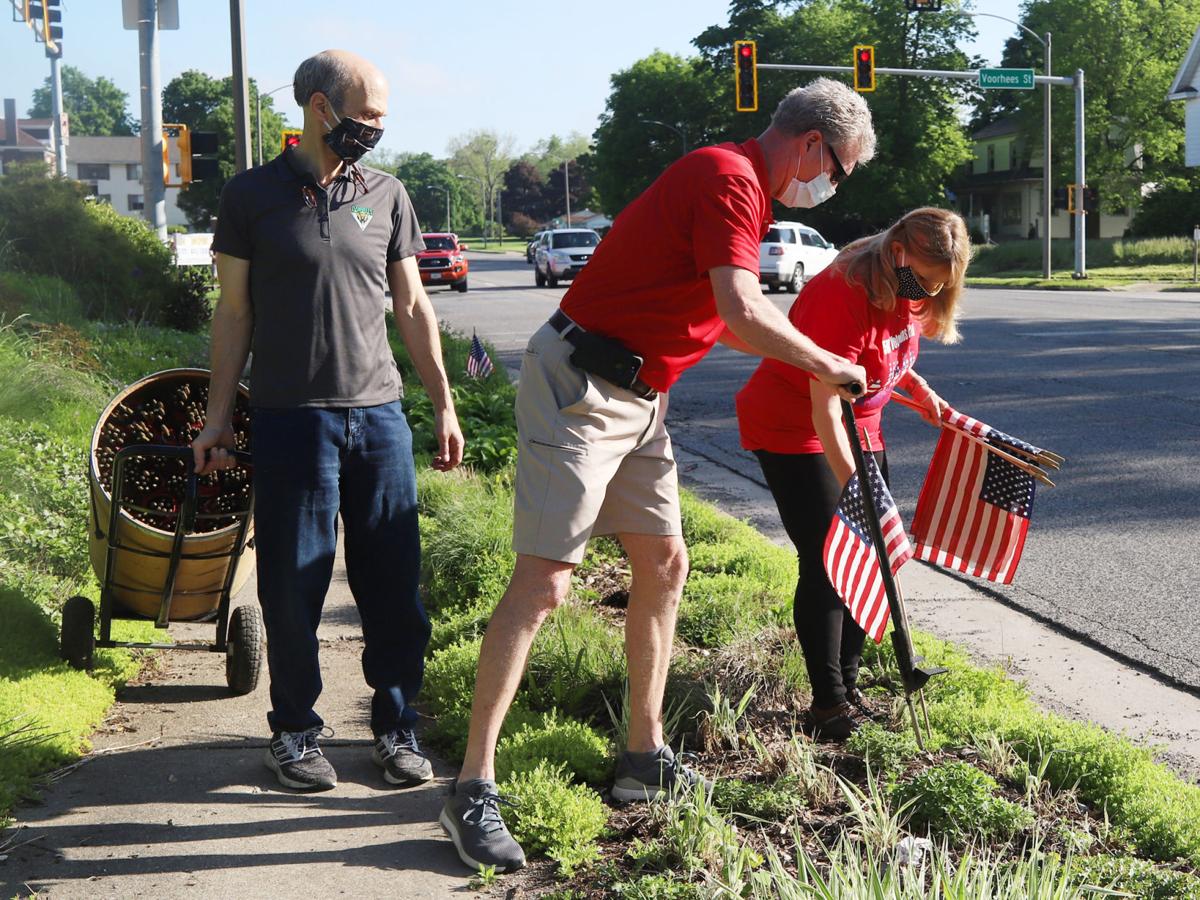 DANVILLE — Flags will wave across Vermilion County and western Indiana this weekend to honor those who died while serving in the country’s armed forces.

However, a crucial part of Memorial Day will be missing in most communities: public ceremonies with speakers, wreaths and a gun salute.

An exception is Georgetown, where a short ceremony will be held at 11 a.m. Monday at the Georgetown Cemetery’s veterans’ monument.

“We owe it to these veterans,” said Ron Torbet, commander of American Legion Dornblaser Post 203 of Georgetown. “We’re going to do this for them.”

Another exception is Ridge Farm, which will have a ceremony at 11 a.m. Saturday, May 30 — the traditional day — at Crown Hill Cemetery.

“We need to honor our veterans and we’re going to do it,” coordinator Stan Richardson said.

Elsewhere, representatives of veterans’ groups will travel in pairs or small groups to place flags or wreaths on graves, or to hold brief ceremonies without the public.

“We can’t do a ceremony, but we can put flags out,” he said. “They should have flags on every headstone.”

Spring Hill Cemetery will get the most flags, with more than 600 veterans buried there.

It’s odd to break with tradition by not having a big ceremony at the Danville National Cemetery this year, Morse said.

“We’re used to having a nice ceremony and a nice crowd and a keynote speaker … but we’re following the governor’s orders,” he said, referring to Gov. JB Pritzker’s pandemic restrictions.

This fall, the Legion hopes to sponsor a county-wide event to honor veterans at the David S. Palmer Arena, he said, and also one for Champaign County veterans.

Here are the other events going on Monday:

In Georgetown, the Legion’s auxiliary will lay a wreath at the veterans’ memorial and two ministers will speak, the Rev. Jim Blue and the Rev. Matt Filicsky.

An honor guard will give a gun salute, and Taps will be played.

Members of the honor guard will maintain social distancing, Torbet said, but will not wear masks. He recommends attendees wear masks and keep their distance.

The Governor Bradford Chapter of the Daughters of the American Revolution has a service each year at the Women’s Memorial behind the Vermilion County War Museum. This year, however, instead of a service, representatives will place wreaths at both the Women’s Memorial and at the chapter-owned Minute Man statue in front of the Vermilion County administrative offices building.

Instead of gathering members of the chapter together to honor veterans, the group is encouraging members to pause at 10 a.m., when the service normally would be held, to think of those who have given so much. That includes people on the front lines in the health-care industry, in addition to veterans.

Members also are encouraged to drive by the memorials as a tribute.

The memorial was dedicated in 1995, and is believed to be the first women’s war memorial in the country.

In Indiana, the Charles Forrest American Legion Post 288 has the community’s safety in its thoughts. In response to Gov. Holcomb’s staged reopening, the post will not host its annual Memorial Day services for the public at Hillsboro’s Rose Hill Cemetery. It also will not serve its annual pancake breakfast, and will not have a service at the Veedersburg Fire Station/War Memorial Park.

Instead, Legion members will visit six local cemeteries on Monday, honoring all fallen veterans and service members, and holding a brief wreath-laying ceremony, which will include a moment of silence, three-volley salute and the playing of Taps.

Because the cemeteries are open to the public, people who choose to attend are asked to practice safe distancing; face masks are encouraged.

In Westville, St. Mary’s Catholic Church will have its Memorial Day Mass at 10 a.m. Monday at Sts. Peter & Paul Cemetery. People will remain in their cars, and a speaker system will be set up.

This is St. Mary’s first public Mass since the stay-at-home order was issued in March. If there are any last-minute changes, parishioners may check the app, myparish.

At the service, people will receive homemade face masks and spray bottles of hand sanitizer.

The Rev. Timothy Sauppé, pastor of St. Mary’s, will bless 20 gallons of hand sanitizer solution during today’s 4 p.m. Vigil Mass, which may be viewed on the “St. Mary’s Catholic Church Westville IL” Facebook page. The hand sanitizer will be divided into nearly 500 4-ounce bottles.

Sauppé’s intention is to give every parishioner of St. Mary’s in Westville and St. Isaac Jogues in Georgetown a bottle of blessed sanitizer and a face mask. Local parishioner Helen Shouse of Westville and her friends have made 200 face masks for the Mass.

The sanitizer solution fulfills all FDA guidelines with 80 percent alcohol and comes from Bluestem Distillery out of Bethalto.

The blessed bottles and face masks will be available at the Memorial Day Mass and then afterward from St. Mary’s parish office. For more information, call St. Mary’s at 267-3334.

The event will feature a speaker and a flyover of five or six vintage planes and helicopters. About 200 flags will line the road into the cemetery.

The ceremony will be held rain or shine.

Stan Richardson, a member of the Chrisman American Legion and Ridge Farm Masonic Lodge, said people will be encouraged to wear masks and keep their distance.

Vermilion County has one additional positive COVID-19 case – a resident in their 20s. This brings the countywide total to 38 positive cases, and 2,054 negative lab results, according to the Vermilion County Health Department on Friday.

Memorial Day is a federal holiday honoring people who died while serving in the country's armed forces. It originated as Decoration Day after the Civil War in 1868, when people decorated the graves of the war dead with flowers. In later years, it evolved to include non-military people who have died.

Gen. John Logan — who had ties to Danville — with the Grand Army of the Republic first proclaimed Decoration Day on May 30, 1868 — a date chosen because it was not the anniversary of any particular battle. Also, it’s a time of year when many flowers are in bloom.

In 1968, Congress passed the Uniform Monday Holiday Act, which established Memorial Day as the last Monday in May to create a three-day weekend for federal employees; the change went into effect in 1971.

The National Moment of Remembrance, established by Congress, asks Americans, wherever they are at 3 p.m. local time on Memorial Day, to pause in an act of national unity for 1 minute.

Another tradition is to fly the American flag at half-staff from dawn until noon local time.