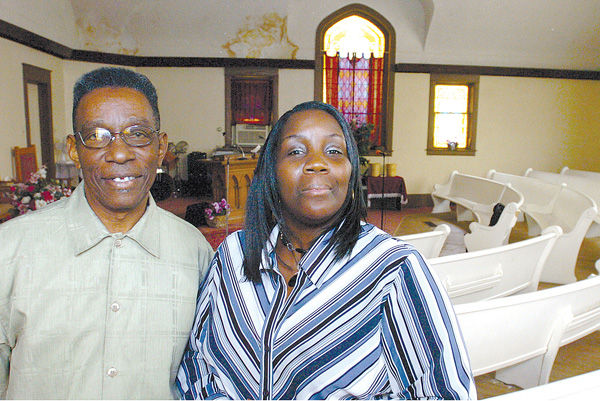 Bishop Barry and Shirley Elliott pose in the sanctuary of the Tabernacle of Praise Pentecostal Church. 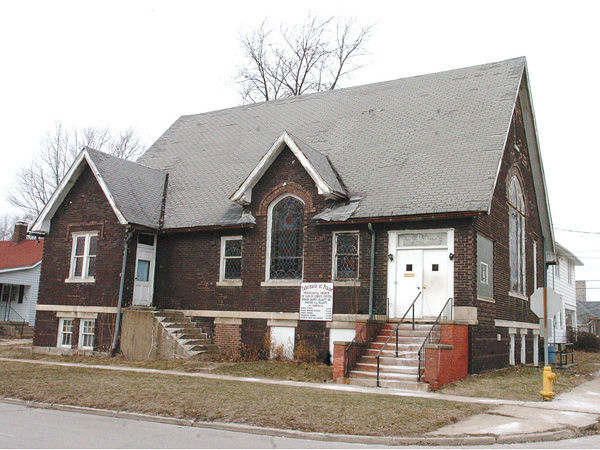 The 116-year-old church at the corner of Commercial and Elizabeth streets is showing its age.

Bishop Barry and Shirley Elliott pose in the sanctuary of the Tabernacle of Praise Pentecostal Church.

The 116-year-old church at the corner of Commercial and Elizabeth streets is showing its age.

For years, members of the Tabernacle of Praise Church have been reaching out to the community. Now, they hope the community will return the favor. The 116-year-old brick church at Commercial and Elizabeth streets is showing its age. It’s one of the oldest working buildings in Vermilion County. Members hope friends and neighbors will chip in to help with much-needed repairs, such as fixing the roof, painting the walls, cleaning the stained-glass windows, tuckpointing, installing new lights and stripping the pews and floor down to the original oak. “Tabernacle of Praise does more for the community than putting on a service on a Sunday,” said Lydia Carter, daughter of Bishop Barry Elliott Sr. “They’ve given so much to the community; the community should give something back.” Associate Pastor Joseph Pierce said, “It’s always good to donate to something that has to do with the Lord. The Bible says you’re supposed to keep up the church of the Lord.” Members are trying to raise money by selling Krispy Kreme doughnuts and sponsoring a basketball tournament Feb. 17 at the Danville Family YMCA. They’ve also set up a building fund to accept donations. Elliott said the church was built in 1891 and originally faced Elizabeth Street. It has been home to a Presbyterian congregation and Douglas Park Church of the Nazarene. In 1994, Elliott and five others left the East End Church of God and met in his home and later at Garfield Park. The group became known as the Tabernacle of Praise. It’s independent, but has fellowship with the Church of God in Christ United. On June 9, 1994, Elliott closed the deal on the brick church at 519 Commercial St. The church needed a lot of work, and members set about painting and repairing. However, age is taking its toll, with water stains and cracks in the walls. Just the same, the building is solid, Elliott said, adding a mason inspected it. The large building has several rooms, but the church isn’t using all of the space, as the power bill can hit $700-800 a month. Three rooms upstairs once were apartments, and the downstairs has six rooms. Despite the physical limitations, the multicultural church has an active outreach ministry. Sometimes more than 50 people attend services; about 200 are enrolled. The church provides food, transitional shelter, transportation, clothing and other services on an emergency basis. Sometimes, Elliott uses his own money from his job as a truck driver to help others. His wife of two years, Shirley, helps the women in the congregation by providing transportation so they can get to appointments or go shopping. The Elliotts say they’ve been blessed that they’re able to help others, even with their limited funds, and they trust in God to meet their needs. More than once they’ve gone shopping for others and have found the items significantly reduced in price. Now, Elliott said, “We’re following the word of God where it says ‘ask and it shall be given.’” People who donate will be helping others through church projects, he said. At one time, the church was the site of counseling programs for those addicted to alcohol and drugs. Elliott, who holds a degree in substance abuse counseling, would like to offer those services again. The church also would like to open a day care, but needs to get the building repaired first. The congregation enjoys activities such as roller skating and bowling. “It’s a busy little place,” Elliott said. At 64 years old, Elliott is proud of his ability to roller skate along with the others and to play the drums. “We’re just having so much fun,” Shirley said with a smile. “It’s more than a church – it’s a family,” Carter said. Carter and her husband, Cornelius, are co-pastors of the Rock of Deliverance in Urbana, which is affiliated with the Tabernacle of Praise. TO HELP The Tabernacle of Praise Pentecostal Church of God in Christ United is seeking donations for its building fund to repair the aging structure at 519 Commercial St. Tax-deductible donations may be deposited at any First Midwest Bank, marked for the Tabernacle of Praise Building Fund. For more information about the church and its fundraisers, call 443-1566.