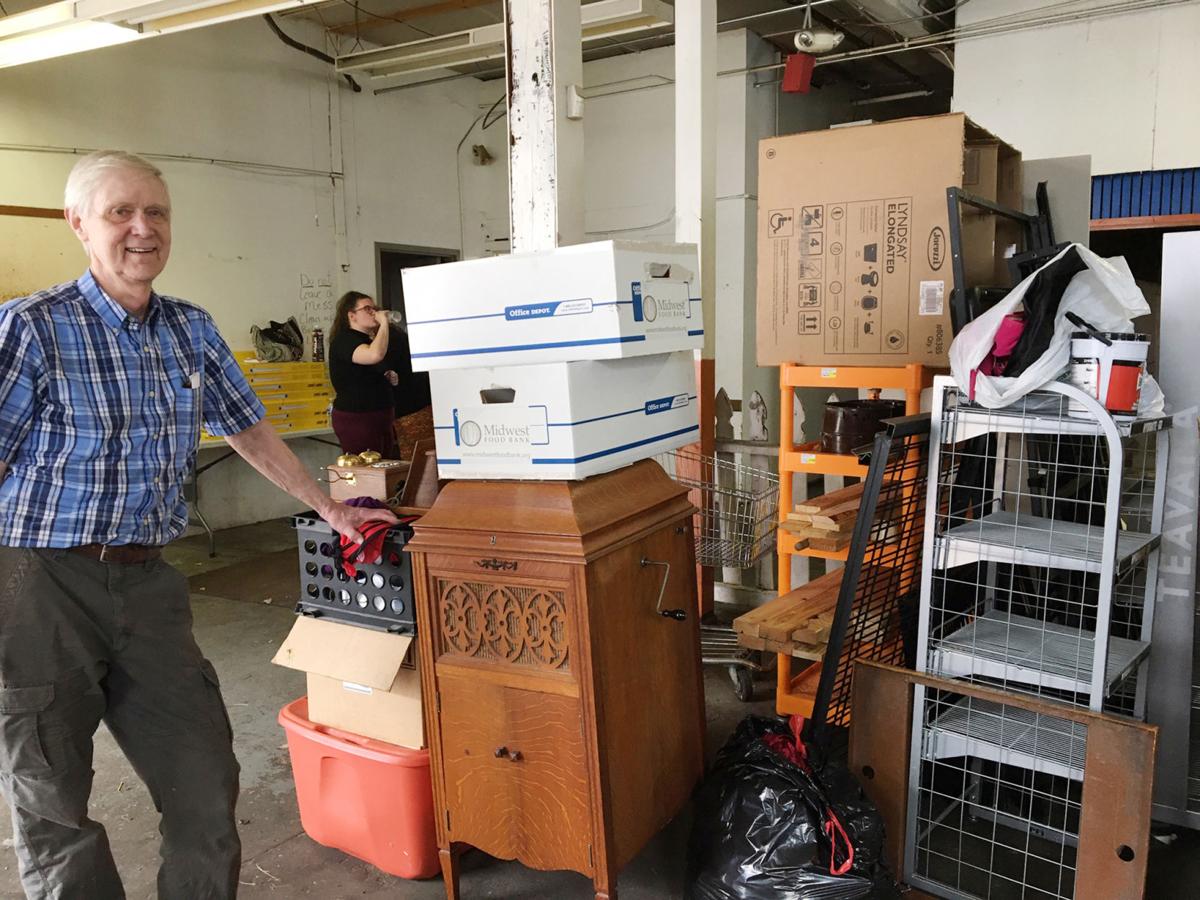 Gary Lickfett takes a break to examine some donations to DLO Musical Theatre in the group’s new building — the former Danville Township building. 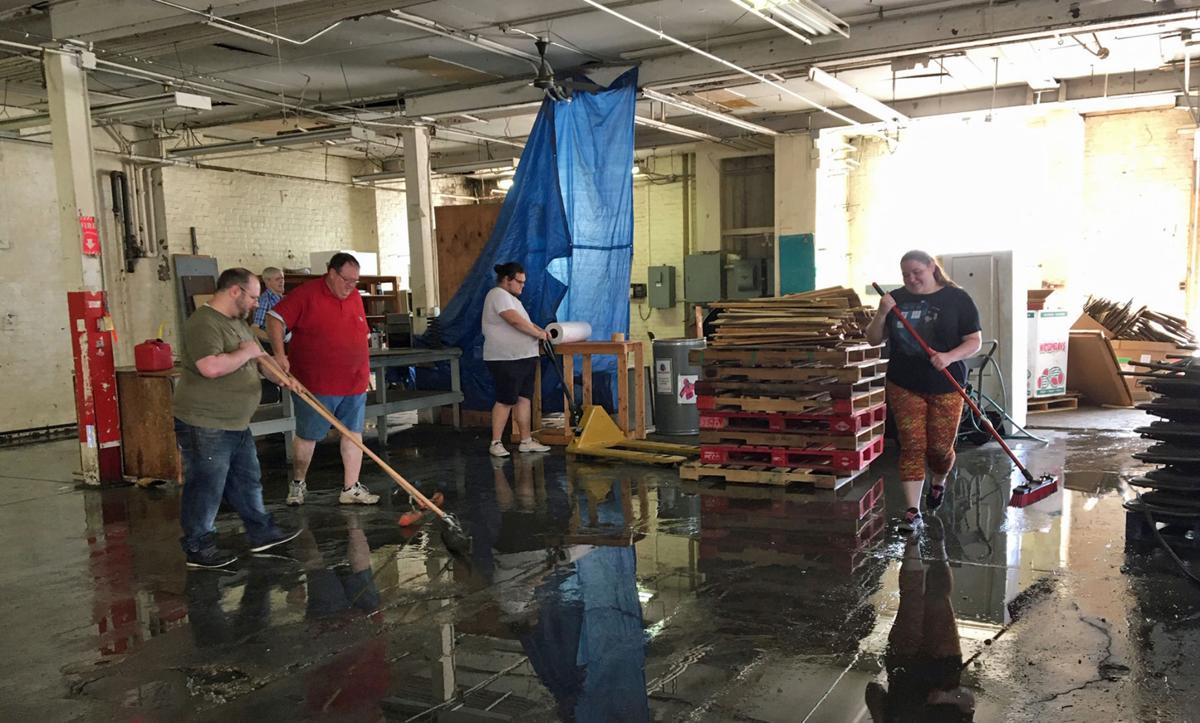 Several actors with DLO Musical Theatre pitch in to get the old Danville Township building into shape so they can use it for rehearsals and storage. From left to right are Adam Sporluck, Tom Fricke, Jerry Strain and Aubrey Falconio.

Gary Lickfett takes a break to examine some donations to DLO Musical Theatre in the group’s new building — the former Danville Township building.

Several actors with DLO Musical Theatre pitch in to get the old Danville Township building into shape so they can use it for rehearsals and storage. From left to right are Adam Sporluck, Tom Fricke, Jerry Strain and Aubrey Falconio.

DANVILLE — It might not look like much now, but local actors are ecstatic about their new rehearsal/storage space.

“We are pretty much over the moon,” said Paul Strain, president of the DLO Musical Theatre board. “We couldn’t have asked a better space if we built one ourselves.”

DLO Musical Theatre submitted the winning bid for the former Danville Township building at 141 N. Walnut St. in February and closed in May. Since then, members have been breaking a sweat to get the 100-year-plus building into shape. They’ve been sweeping, power-washing, discarding, building walls and organizing the two-story site.

The public will have a chance to see the results of their labor during an open house from 2-5 p.m. June 27. Entry will be limited to 10 people at a time.

When reconfigured, the new facility — called DLO Musical Theatre Backstage —will be used for all DLO functions except performances — that is, rehearsals, set construction, costumes, equipment storage, board meetings, and box office.

“It’s really solid in terms of its construction,” Strain said of the structure.

Longtime member Ron McDaniel said, “Although we are grateful for the generosity of our current landlords, our board has felt compelled to search for a new facility where everything can be consolidated. The new building has the potential to meet all our nonperformance needs.”

When the new space is ready, DLO will let those two places go, and move totally into the 14,000-square-foot building.

He added, “I can’t wait to get in here and start rehearsing.”

Besides needing cleaning, the building needs some electrical work and roof repairs. DLO is erecting walls upstairs for rehearsal areas, and other walls may come down. The rehearsal space will be air-conditioned, and the storage space downstairs will be heated.

DLO is making a significant investment in the building, Strain said, but can do so, thanks to the good stewardship of past boards.

One of the nice features of the new site is the freight elevator, which everyone is thrilled with — especially actors who had to carry costumes and props up and down the steep steps in the downtown storage building.

It costs $1,000 a year to maintain elevator, as it needs periodic inspections and a dedicated phone line, but, Strain said, “It’s worth it.”

The building also has alleys on two sides, with a large overhead door opening into each.

McDaniel is credited with finding the space. He saw an ad in the Commercial-News that bids were being taken for the township building.

He ran it past the board, and, he said, “We all felt it was perfect.”

He added, “It’s in reasonably good shape. It’s going to be super-duper when it’s done.”

The board had been looking for a place to buy for about 25 years, former president Nancy Henderson said, and the members looked at a lot of places.

“I was excited to see this,” she said.

Strain said, “It was an opportunity we couldn’t pass up.”

One of the nice features, besides the elevator, is that there’s a city parking lot just across the street. Also, the building is just 75 feet from the historic Fischer Theatre, which can be used for productions.

When the DLO actors are rehearsing in the building, Strain said, “that will bring 100 people a week to downtown. We’re not a business per se, but we’ll bring traffic back downtown.”

McDaniel paraphrased the opening sentence of “A Tale of Two Cities” to describe DLO’s current situation — it’s the best of times and the worst of times.

The “best of times” is having its own building. “It’s a dream come true,” he said.

On the other hand, the “worst of times” hit with the coronavirus pandemic: “Here we are with everything shut down,” McDaniel said.

Except for donations, there are no funds coming in, he said, but DLO still has to pay rent on two places for now and make payments on the new site.

The COVID-19 health threat forced the indefinite postponement of the reprise of “Next to Normal” (a fundraiser for DLO and the Fischer Theatre) and its spring show, “Mamma Mia!,” both of which were in rehearsal.

The teen and children’s musicals for the summer were canceled. The fall production of “The Hunchback of Notre Dame” and the winter dinner-theater are in question.

Strain said he hopes DLO can present a small show in the fall at the Fischer or Harrison Park. He also hopes to present the youth programs in an online format this summer. That’s still being explored, and details will be announced on the website.

Lisa Strain, who was helping husband Paul and two children, Abby and Jerry, clean, said, “It’s neat to be in a historic building.”

And, Paul added, “To help keep it viable.”

In DLO’s 64-year history, it has produced almost 200 mainstage, dinner theater and youth shows. Now, after all these years, it has a home of its own.

People also may consider a legacy gift by including DLO Musical Theatre as a beneficiary of your will, trust, life insurance, or investment account. DLO is a 501(c)3 not-for-profit organization.

The public is invited to tour the new DLO Musical Theatre Backstage at 141 N. Walnut St. The open house will be from 2-5 p.m. Saturday, June 27.

Parking is available in the city lot to the west of the building, across Walnut.

Entry will be limited to no more than 10 people at a time, and face coverings must be worn indoors.

Besides the public, DLO extends a special invitation to patrons, supporters, actors, volunteers, and advertisers.