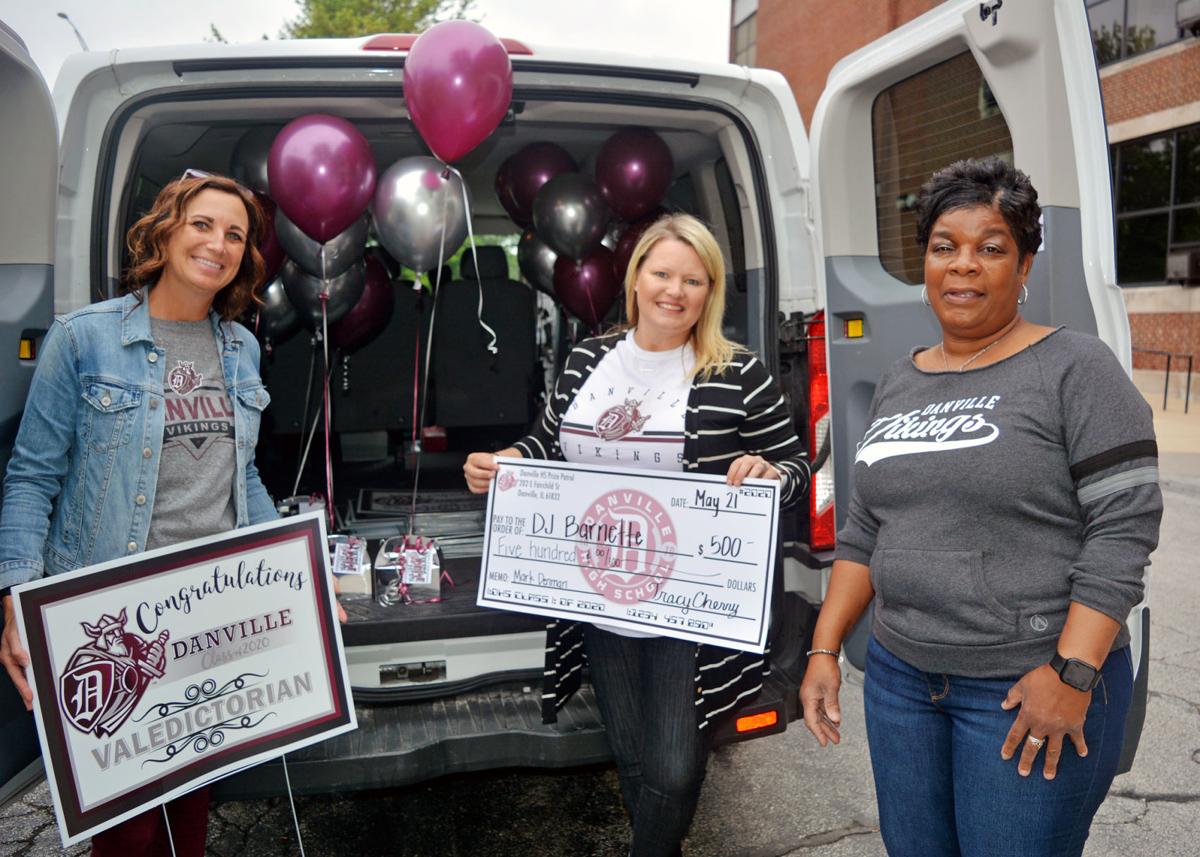 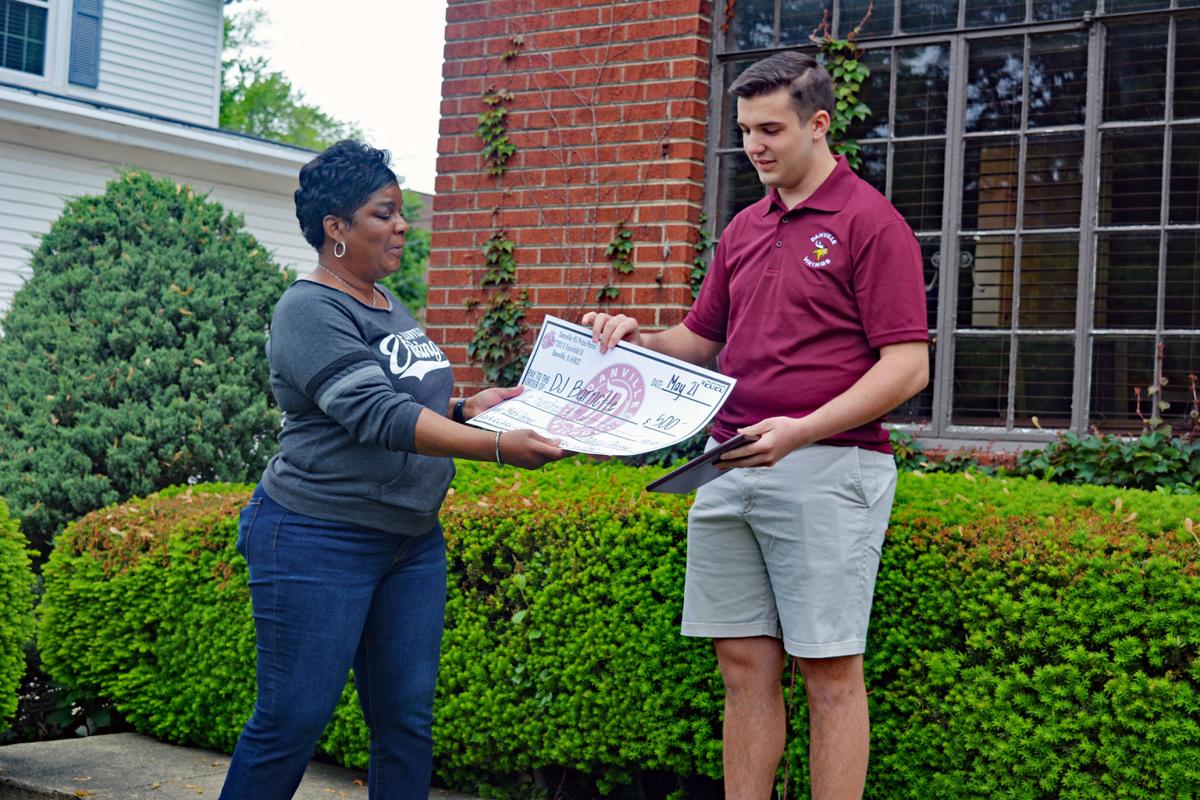 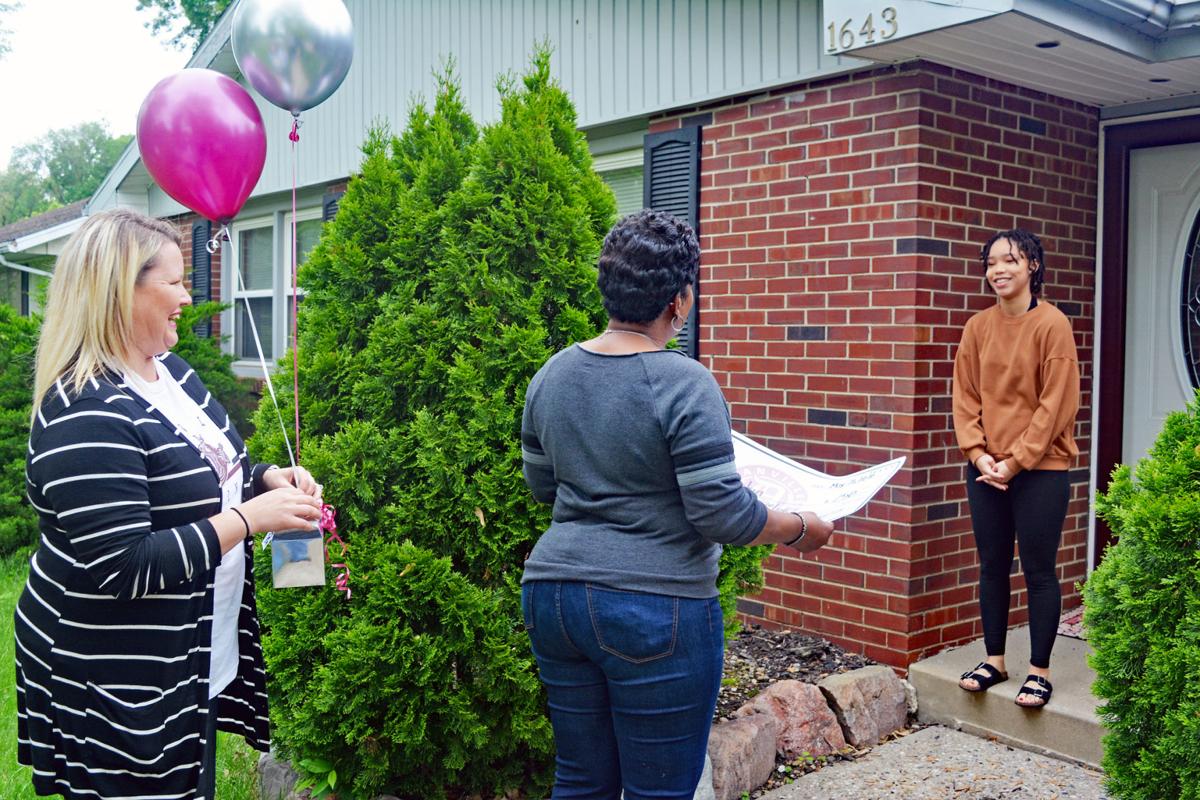 Cherry and DHS Assistant Principal Amanda Campbell, counselor Erin Griffin, teacher Lori Woods and secretary Kerry Showers made up the Viking Prize Patrol that cruised the streets of Danville in a decorated van and rolled up at the homes of seniors who had earned scholarships.

“We’ve had a scholarship banquet at Turtle Run the past few years, but that wasn’t happening this year,” Griffin said, alluding to the COVID-19 outbreak.

The Viking Prize Patrol hits the streets again today when they will bestow gifts on another 20 seniors.

“We called the parents ahead of time, so most of the kids know,” Griffin said. “We wanted to make sure they’re home for this.”

Woods, who teaches math at the high school, hatched the idea for the Viking Prize Patrol as a way to recognize and honor the seniors who received scholarships.

“The best part of the Viking Prize Patrol was the chance for each recipient to be celebrated individually and have a moment with Ms. Cherry and the Prize Patrol staff,” Woods said. “Erin Griffin took an idea and created a special memory for the DHS seniors.”

This evening, community members are asked to participate in a Shine on Seniors event by turning on their porch light from 8 to 8:20 p.m. The lights at DHS’ Ned V. Whitesell football field also will be lit during that time.

The display of lights is in recognition of the Class of 2020 and all first responders, all essential workers and District 118 teachers and staff.

A Swag Bag Parade will take place between 2 and 5 p.m. Sunday, at the high school.

Graduating seniors will drive along Jackson Street on the west side of DHS where administrators will hand each student a swag bag. DHS staff will line both sides of the street and will be spread out along the sidewalk to maintain social distancing. Each senior swag bag will contain a T-shirt, DHS blanket, DHS cup, yearbook and a DHS newspaper.

The Class of 2020 celebration will culminate with a virtual graduation that will be taped next week on Tuesday, Wednesday and Thursday.

One significant change in the graduation plans is that each graduate now may be accompanied by two parents or guardians who will be able to watch their child receive their diploma.

“Our main concern was the safety for everyone in this whole process,” she said. “We wanted to have it (graduation) and still obey state and federal requirements.

“We reduced the number of our (District 118) people and school board members to allow parents and guardians to come in,” Cherry explained.

“That satisfies everyone, and we can have closure for the students,” she said. “It’s all about the kids.”

Groups of 10 graduating seniors, wearing their caps and gowns, will arrive in 30-minute intervals at the high school. The graduates’ names will be announced as they walk across the stage in the Dick Van Dyke Auditorium to be presented with their diploma.

A photo will be taken and then the graduates will continue to walk out of the building.

A videographer will film the three days of diploma presentations and compile it into a video of the virtual graduation ceremony, which will be posted on District 118’s website and Facebook page starting June 13.

The day before the debut of the virtual graduation video, signs celebrating the Class of 2020 will line North Vermilion Street on June 12.

“We can do it as long as the signs don’t block anything,” Cherry said.

A final senior social event, such as a picnic or other event to celebrate the Class of 2020, will be planned later so that the seniors can sign yearbooks.

The Class of 2020 also will be invited to Homecoming in the fall and to Prom 2021 free of charge.