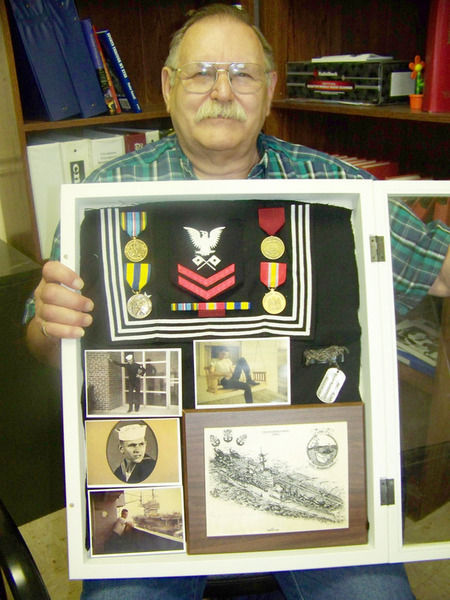 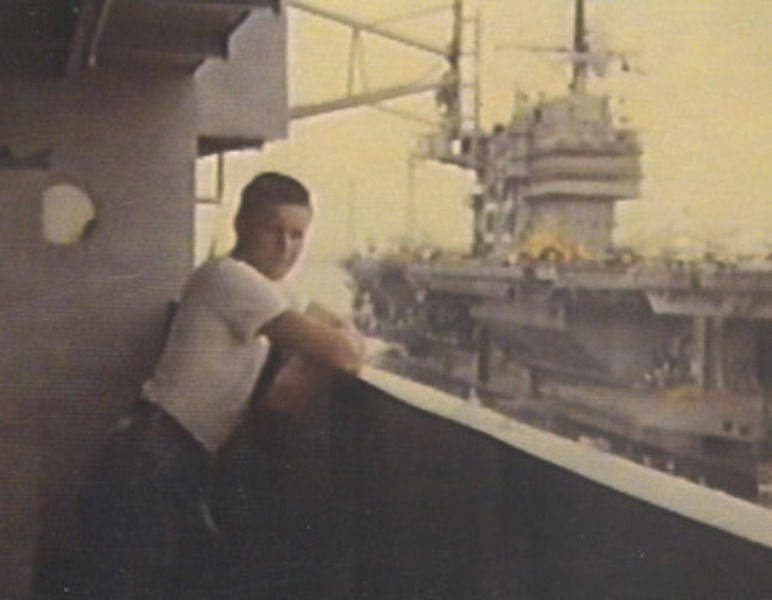 Ray Gash Jr. is shown on the USS Guadalcanal with its sister ship, USS Okinawa, in the background.

Ray Gash Jr. is shown on the USS Guadalcanal with its sister ship, USS Okinawa, in the background.

When Ray Gash Jr. put together a shadow box of his military service, there was something missing — his dog tags.

“I was upset about (not having the tags),” the Navy veteran said. “I had everything but the dog tags.”

Then, a few weeks ago, he received a call from Bob Sanders of Lewistown, Pa., who served on the USS Guadalcanal in the early 1960s with Gash. He surprised Gash by saying that he had found one of the tags at his home.

Sanders asked for an address and mailed the tag to Gash’s Bismarck home.

The two were signal men on the ship, but hadn’t been in touch for 48 years.

“I couldn’t believe it,” Gash said, adding that he didn’t know his Navy buddy had the tag all these years.

“He was just beaming,” Anne Gash said of her husband’s reaction upon receiving the package. “He just couldn’t believe it. He thought he’d never see them again.”

Gash, a Danville native, served on the ship from 1962-65 during the Cuban and Panamanian crises. He was an 18-year-old second class petty officer, and was a member of the ship’s original crew.

The ship was in the Caribbean when Gash learned he was to be discharged. He took a shower and must have left the dog tags behind, he said, in his rush to catch a flight to Jacksonville, Fla.

He often wondered what happened to them.

Sanders said in a telephone interview, “It was a strange turn of events. I have no clue where I got it and how did I keep it for 48 years?”

In early July, Sanders’ grandchildren were involved in a Bible camp at their church, with the theme “Boot Camp for Jesus.” The children were given paper dog tags on a chain.

Sanders decided to dig out his tags for the two granddaughters to use, and was surprised to see three tags — the third tag had Gash’s name on it.

He hadn’t seen Gash since 1965, and had moved several times, so he was amazed that all the tags had traveled with him without getting lost.

Sanders got online to find Gash, vaguely remembering that he lived in the middle part of the country. He found a phone number in Illinois and called.

“It’s amazing that I found him and his tag,” Sanders said. “I didn’t know if he had died or moved.”

Sanders, who was discharged in 1966, said he’s going to look through the rest of his stuff to see if he has the second tag.

In his letter to Gash, Sanders wrote, “Enclosed you will find your dog tag. I took very good care of it for over 48 years.

“I have no idea how I got it, and what’s more amazing is how I found it.”

He also enclosed a copy of a photo showing Sanders, Gash and other men on the ship. In later years, the Guadalcanal was decommissioned and sunk, and Gash said he wished he had been able to get a souvenir from it.

Gash has put together Navy memorabilia in a shadow box. Included are old photos, his medals — two expeditionary medals, a good conduct and a Vietnam era medal — the flap from his dress blues, and now the tag. The tag has his name, blood type, serial number and religion.

He also has a plaque with an etching of the ship on it, which he got during a reunion several years ago.

In addition, he has the dog tag worn by his late father, Ray Gash Sr., who served in the Army during World War II.

“We have been good veterans,” Gash said.