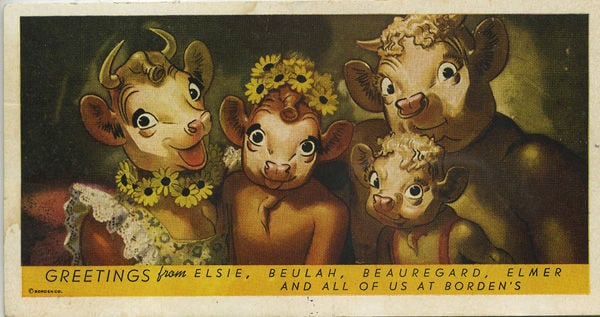 This ink blotter shows Elsie and Elmer with their children, Beulah and Beauregard. The family -- which added twins in 1957 -- has been representing Borden Dairy Co. for many years. 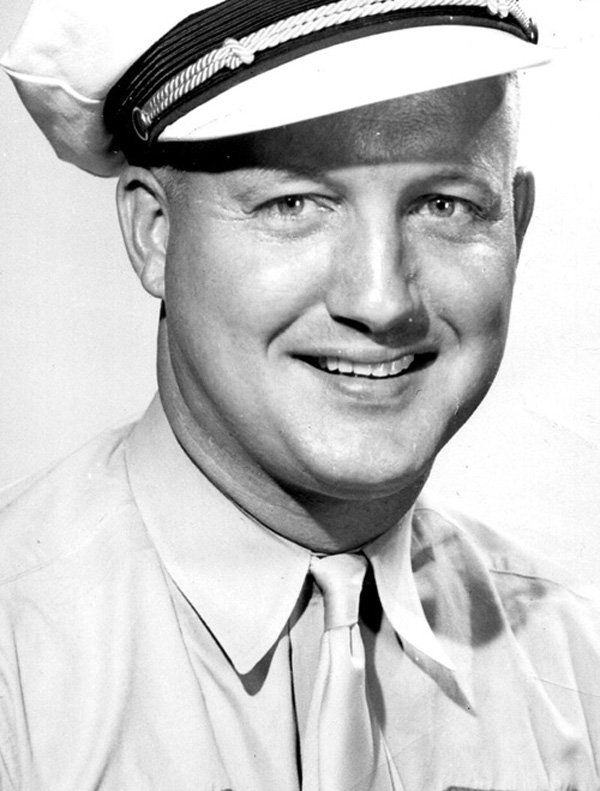 This ink blotter shows Elsie and Elmer with their children, Beulah and Beauregard. The family -- which added twins in 1957 -- has been representing Borden Dairy Co. for many years.

Remember the days when milkmen delivered milk — and other dairy products — to your doorstep or sometimes even inside your house?

Milk delivery faded out about 40 years ago when women started working outside of the home, but one old-time milkman, Gerald Wicoff of Danville, still remembers those days back in the late 1940s and 1950s.

Wicoff started delivering a wholesale route, which meant he delivered milk to stores, for Borden’s in 1949.

“I worked six days a week and made $48 a week,” the nonagenarian recalled.

Back then, Borden’s was the newcomer to Danville, trying to break into a dairy market dominated by Producers Dairy, Illiana Dairy, Meadow Gold and independent local farmers.

“There was quite a bit of controversy about it. There was a lot of hassle about it back then,” he said. “We couldn’t call it Borden’s at first.”

Everpure milk at 124 E. Fairchild St. was the distributor of Borden’s products.

“They shipped it down from Chicago on refrigerator trailers,” he recalled.

Sometimes, however, the milk delivery was detoured on its way to Danville.

“They always seemed to break down in Crescent City,” Wicoff said. “We always wondered what the attraction was there . . . if there was gambling or women or both.”

To prevent Borden’s from transporting its milk all the way from Chicago and to protect the local dairies,      Danville City Council went as far as to try to pass an ordinance requiring that milk had to be pasteurized in Vermilion County.

“But people in Danville wanted the different Borden products,” he said.

Those products included cottage cheese, cream, oleo, eggs, different kinds of gelatin salads, pancake mix in a quart carton and even potato chips at one time.

In 1951, Wicoff became a door-to-door milkman for the next 10 years with a route on the north end of Danville and got to know a lot of people. Even today, someone will remember him from his route.

“I delivered to the Hegelers, the Rissmans who had the (Windbreaker) jacket factory, and the Ehrlichs,” he recalled.

Some of his customers were Jewish, which gave Wicoff the opportunity to sample different foods.

“I got my first taste of matzo balls and gefilte fish,” he said.

He also remembered that “people were very good to me at Christmas,” with customers giving him gifts of cookies and candy that he brought home to his children.

“The kids couldn’t wait to open the candies and cookies,” he said.

Back then, home delivery was sometimes taken literally. Doors were left unlocked and Wicoff would place the milk on a table and leave.

“It was not unusual to put the milk and cottage cheese inside the house, especially if they had a standing order,” he said.

Sometimes, however, Wicoff was lucky to make it to the doorstep with a delivery.

“On North Gilbert Street, there was a dog that would lie in the bushes and wait for the milkman to come,” he said.

When he first started making deliveries, Wicoff said he kept the milk on chipped ice that he and the other milkmen would get from Beard Ice Company every morning.

“We had some of the first cartons after World War II,” he said of Borden’s. “They were wax coated with a staple on top. The only problem was they leaked.”

Wicoff said he loved delivering his milk route because every day promised to be a new experience. He also learned to be careful what he said to his customers.

One day, he entered a customer’s back porch, where he saw a pair of large loafers covered in mud. He told the woman that she had better move her husband’s shoes before a dog got hold of them.

“Earlier, some dog had carried off my shoes at home,” he explained.

The woman let Wicoff know those were her shoes.

That taught him to hold his tongue.

Wicoff also worked for a short time delivering bread for Sunbeam and later at Lauhoff Grain Co. for 25 years.

Does anyone else remember the days of at-home milk delivery? If you do, I would love to hear your story.

Carol Roehm is the education reporter. Contact her at 477-5174 or by e-mail at croehm@dancomnews.com.