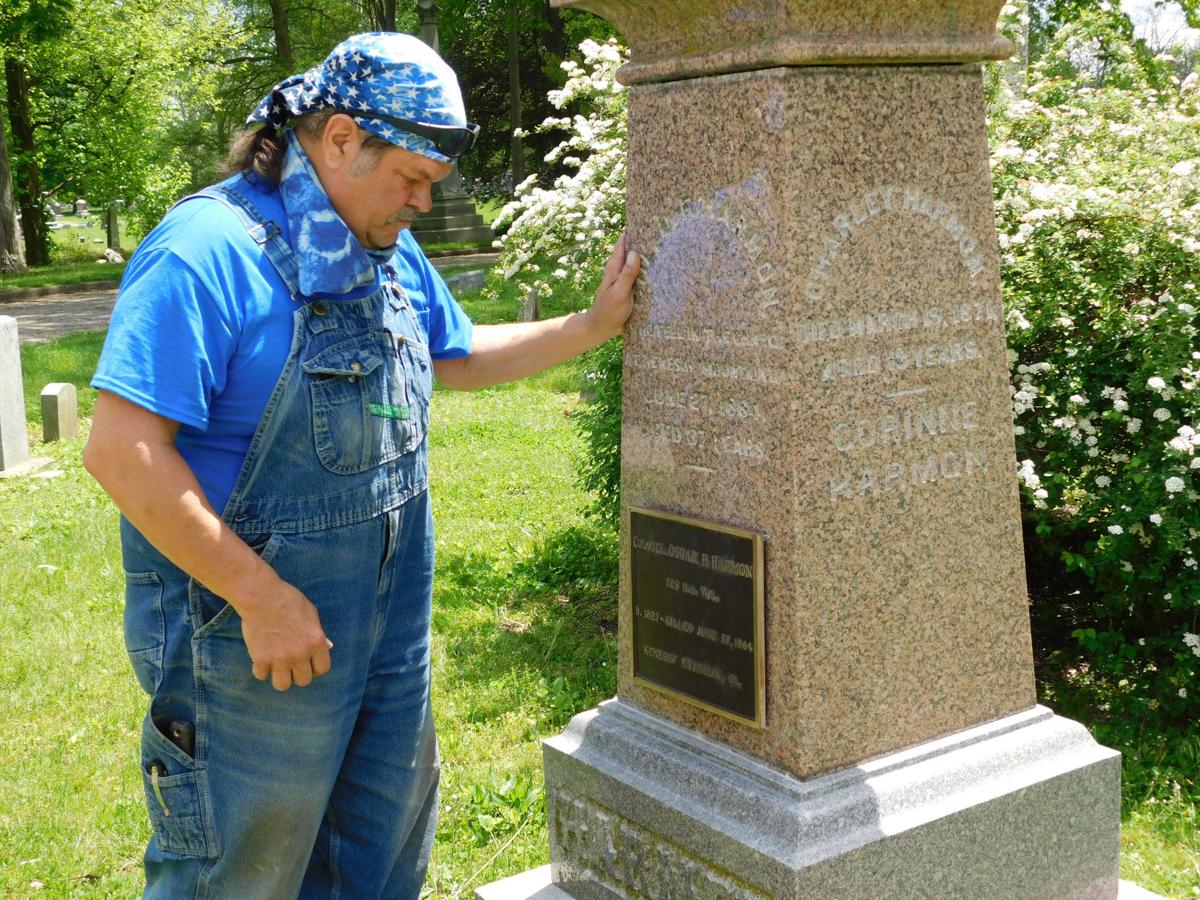 Tim Hess with Adams Memorials attaches a brass marker to Col. Oscar Harmon’s stone at Spring Hill Cemetery. The plaque had been on an oak tree for more than a century, but the tree started to engulf the stone and was removed. 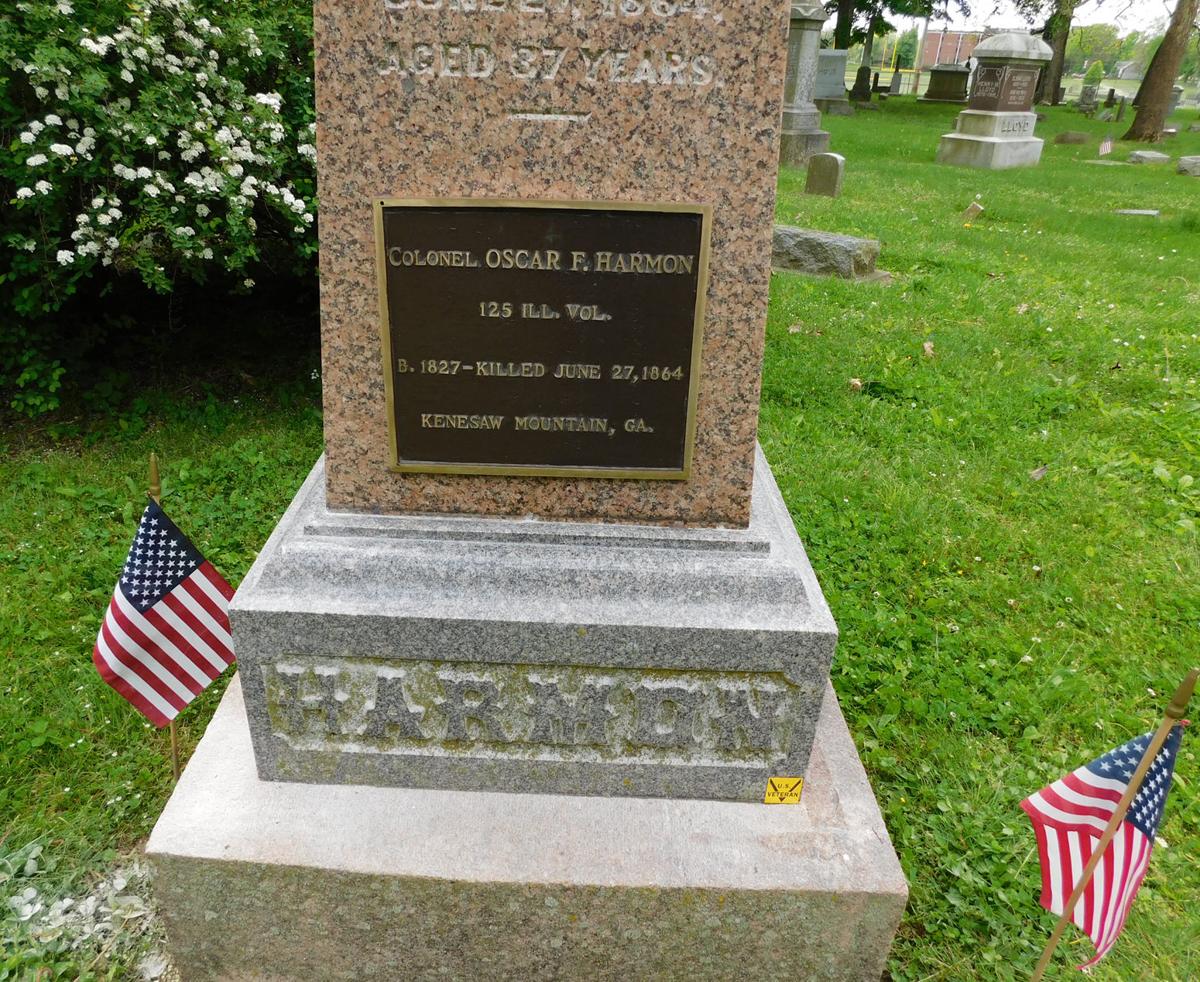 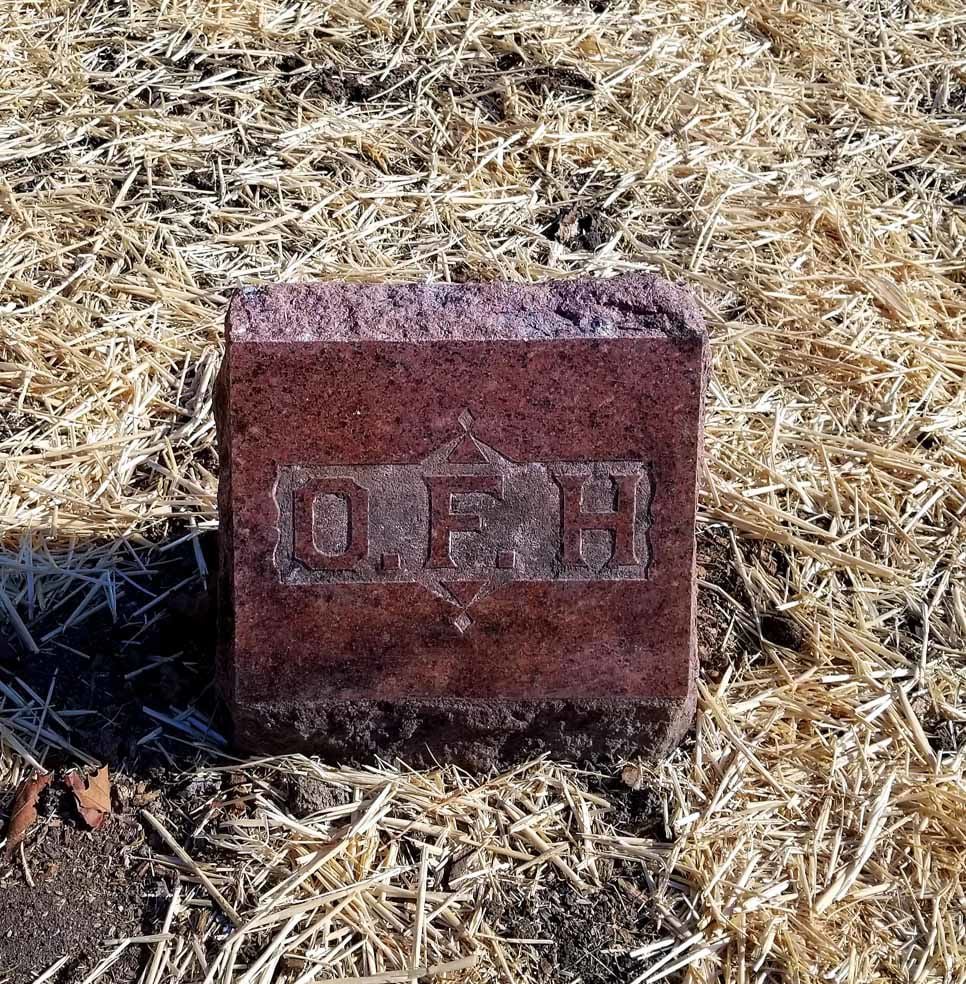 This red granite stone was uncovered when an oak tree was removed from the area of Col. Oscar Harmon’s plot at Spring Hill Cemetery. The stone has his initials engraved in it. 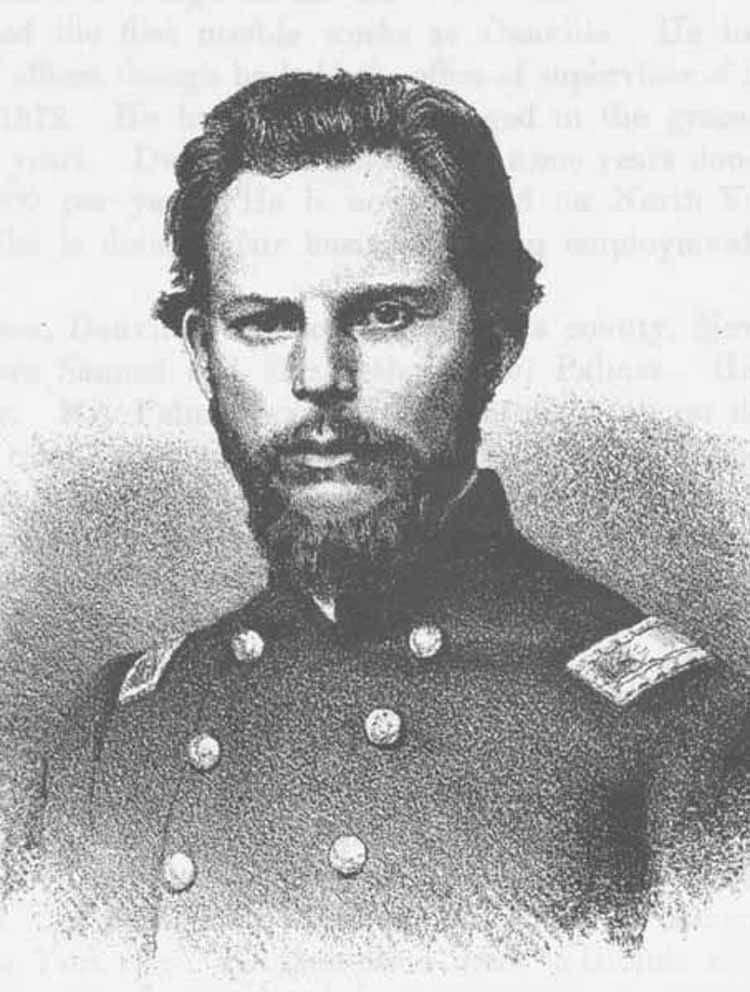 Tim Hess with Adams Memorials attaches a brass marker to Col. Oscar Harmon’s stone at Spring Hill Cemetery. The plaque had been on an oak tree for more than a century, but the tree started to engulf the stone and was removed.

This red granite stone was uncovered when an oak tree was removed from the area of Col. Oscar Harmon’s plot at Spring Hill Cemetery. The stone has his initials engraved in it.

DANVILLE — For the first time in decades, the individual slanted marker for Col. Oscar F. Harmon’s grave at Spring Hill Cemetery has seen the light of day.

Each individual buried in the plot has a stone like that with the person’s initials engraved into the granite. They are placed in a semi-circle around the 7-foot obelisk.

The story goes that veterans of the colonel’s 125th Illinois Infantry had marched by the Harmon family plot after a monument dedication in the cemetery and some members said that they didn’t want their colonel to be “lying in the sun like he was at Kennesaw.”

Soon after, an oak sapling was planted to give shade to his grave. That small tree grew until it engulfed the colonel’s stone. Less and less of it could be seen each year, until only the tip of the marker was peeking out of the tree’s massive roots.

As the oak tree succumbed to age, it was topped and trimmed about five years ago. In late February of this year, workers cut the tree down, leaving only a large stump.

Having studied and written about Harmon for more than 25 years, as well as being a regular visitor to Spring Hill Cemetery, I have followed the condition of the tree and the work on the site closely. Each year at various times we place a wreath or flag at his gravesite.

A few months ago, my wife Rhea Ann and I visited with Nancy and Lon Henderson. Lon is on the board of directors at the cemetery and shared his ideas about highlighting the history at Spring Hill. I told him the Civil War groups’ plans for improving the McKibben family plot there and asked about the Harmon site.

We were pleased to learn that the stump would be removed soon. In mid-April, I saw the red granite stone with the initials OFH glistening in the sun. That struck a note with me, since I tend to feel a closeness to the characters that I portray in Living History. I feel especially close to the colonel, having portrayed him several times at his gravesite, at the Old State Capitol in Springfield, in various speeches and in a re-enactment of the Battle of Kennesaw Mountain where he was killed.

I congratulated Lon on a job well-done, and he told me that the stump removal project started on April 9, and that by the end of the day, the entire top of the stone was visible and totally accessible to be removed.

“The grounds crew of the cemetery lifted it out,” he said. “Then, the next day, I removed more of the stump and enlisted John Bowers to remove the remainder with his stump grinder. That was done on the 11th, and on April 15, the slant marker was back in the ground, and I reseeded the area.”

Spring Hill is full of history, Henderson, and used to be a park with a lagoon.

He decided to tackle the Harmon project “for the community,” he said, adding, “We need to remember our heritage. We need to continue to celebrate people who were here before us.”

Henderson said he would like to see an ornamental tree planted to help shade the plot, “but not so close to the grave this time.”

The brass marker that had been on the oak tree for more than a century was returned to the gravesite last week.

We tried to find out when the monuments were installed at the cemetery, but no records exist. Wendell Adams of Adams Memorials identified the obelisk as being made of Red St. Cloud granite and the sub-base made of Barre granite. The smaller slanted markers are of Missouri Red Granite.

Janie Ferber, the local Adams Memorials manager, said the stones are similar in style to those made by Knox, Miller and Company, which had a Danville office on Vermilion Street.

Harmon was killed on the morning of June 27, 1864, at the “Dead Angle” of Kennesaw Mountain in Georgia, as he led his 125th Illinois Infantry Regiment toward the Confederate breastworks.

Following the wounding of the brigade commander, Harmon took command of the brigade shortly before a minie’ ball to his heart took him down. More than 50 members of his regiment were killed that day, as well, including his daughter’s fiancé, Capt. William Fellows.

Harmon’s body was sent back to Danville where a huge funeral was held. Thousands of people watched as his hearse traveled from his funeral service to the Old City Cemetery on Hazel Street at the current site of the U.S. Post Office and Beeler Terrace. The colonel was re-interred at the newly-opened Spring Hill Cemetery in November 1865.

A ceremony to dedicate the refurbished McKibben and Harmon family plots will be held after the pandemic restrictions are lifted. Those will be conducted by the Ward Hill Lamon Civil War Roundtable and the Illiana Civil War Historical Society.