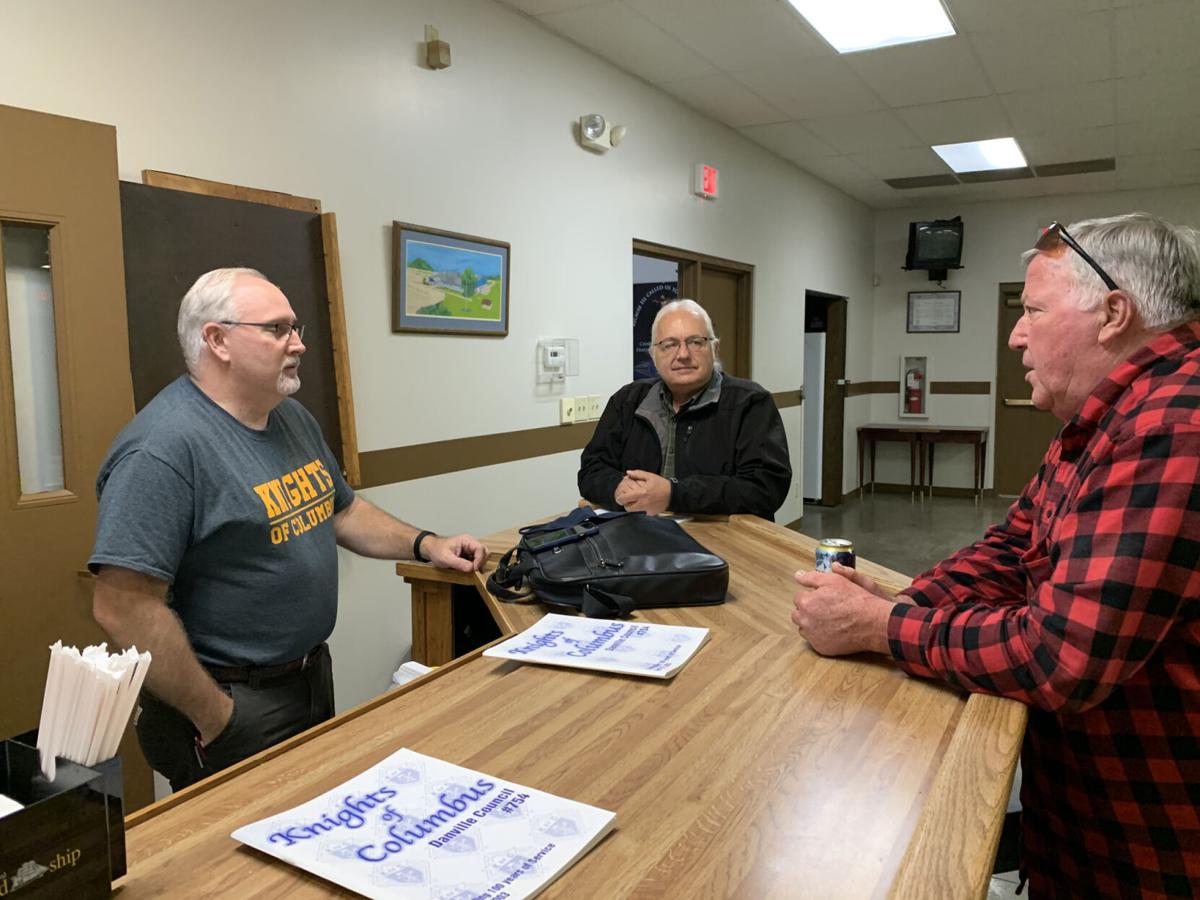 Former Grand Knights, from left, Rich Miller, Richard Drake and Mike Puhr talk about the Knights of Columbus in the building. 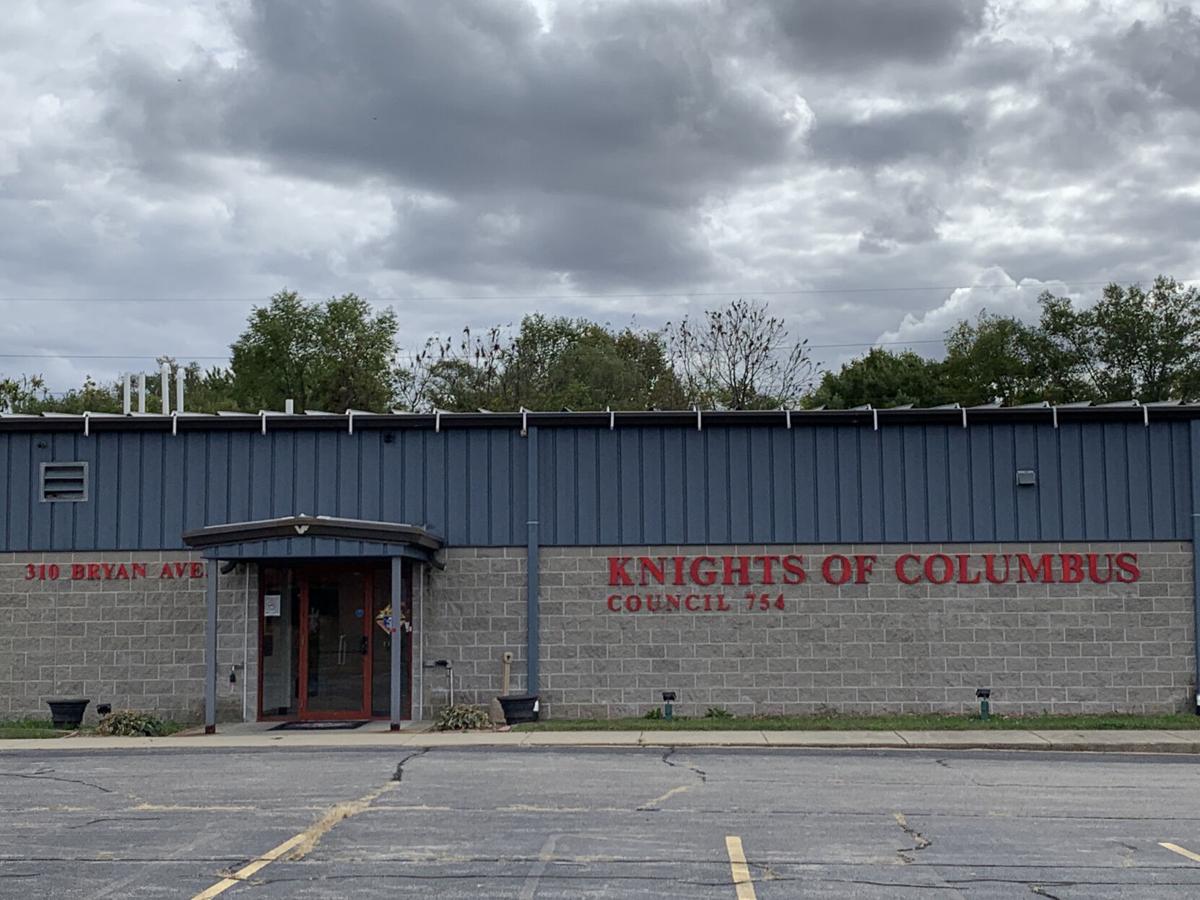 Jennifer Bailey/Commercial-News The Knights of Columbus has closed its building, 310 Bryan Ave., and put it up for sale. The group will remain active in the community.

Former Grand Knights, from left, Rich Miller, Richard Drake and Mike Puhr talk about the Knights of Columbus in the building.

Jennifer Bailey/Commercial-News The Knights of Columbus has closed its building, 310 Bryan Ave., and put it up for sale. The group will remain active in the community.

For more than 100 years, the local Knights of Columbus has raised money for local charities and served the community in a variety of ways.

The Knights closed its lounge and banquet hall March 16 at the start of the coronavirus pandemic and have found it necessary to close The Columbus Club, its building, at 310 Bryan Ave., for good.

The Knights of Columbus has had a presence in Danville since 1903. The Columbus Club opened in 1996 at its current site.

The group has continued to take on community projects, such as its annual Tootsie Roll sale to raise money for local children with disabilities, free-throw and poster contests for local youth, and supporting the local Catholic parishes.

Last year the Knights of Columbus Council 754 purchased robotic cats and dogs for veterans at the Veterans Affairs Illiana Health Care System. They also started the Glo Bingo fundraiser; and they had their annual golf outing last month, which raises about $3,000 annually for local charities.

Rich Miller, Mike Puhr and Richard Drake, who have been Grand Knights, said they are financially unable to reopen.

The building and land are up for sale.

“We want all our members and people that supported us over the years by attending events and meals (to know) that we very much appreciated them. We do plan to start having events again as soon as possible,” Miller said.

They will have events out of other locations, such as Schlarman and parishes.

Puhr said the Knights of Columbus is not just a building.

“The Knights of Columbus will still be an organization in Danville and Vermilion County,” he said.

Miller added they’re not going anywhere as Knights of Columbus.

They plan to still have their fundraisers, which fund scholarships and other projects.

“Anything we do stays local,” Puhr said.

“This has been a crazy year for everything” Puhr added.

The Knights of Columbus also has seen a decline in membership through the years. At their peak, they had around 700 members.

Younger people don’t join clubs anymore, Puhr said, adding that other organizations are seeing that too.

But Drake said they still have members from all over.

Danville Council No. 754 was founded April 19, 1903. On that day, the first Danville Council class was initiated. The program opened with Mass at St. Patrick Church, after which the charter members went to the Odd Fellows Hall where the first, second and third degrees were exemplified. A banquet followed.

Twenty-five years later on June 24, 1928, a re-enactment of the original founding of the Danville Council took place. A banquet allowed at the Wolford Hotel.

The council rented various rooms around the business district of Danville: East Main Street above where Beard Ice Co. had a sales room; across the street south of Main Street in a room where the Elks club is; rooms at the southwest corner of the square over a tavern; rooms in the Lincoln Theater building, West Main Street; a hall over Thom McAn Shoe Store on North Vermilion Street; Moose Club rooms on North Hazel; and one venture into buying a home which didn’t work out because of the depression.

In 1953, the Illinois Knights of Columbus State Convention was in Danville to honor Council 754’s 50th anniversary and to celebrate newly-acquired clubrooms opening.

It had other sites before moving into the constructed building at 310 Bryan Ave. On June 2, 1996 there was a formal dedication, Danville priests Mass celebration, council/community open house and community banquet.

In October 1996, council members completed construction of a storage building at the site to house food and food freezers for dinners, banquet tables, chairs, barbecue cookers, deep fryers and historical records. A concrete patio also was poured to be used for outdoor wiener roasts, steak fries and picnic settings.