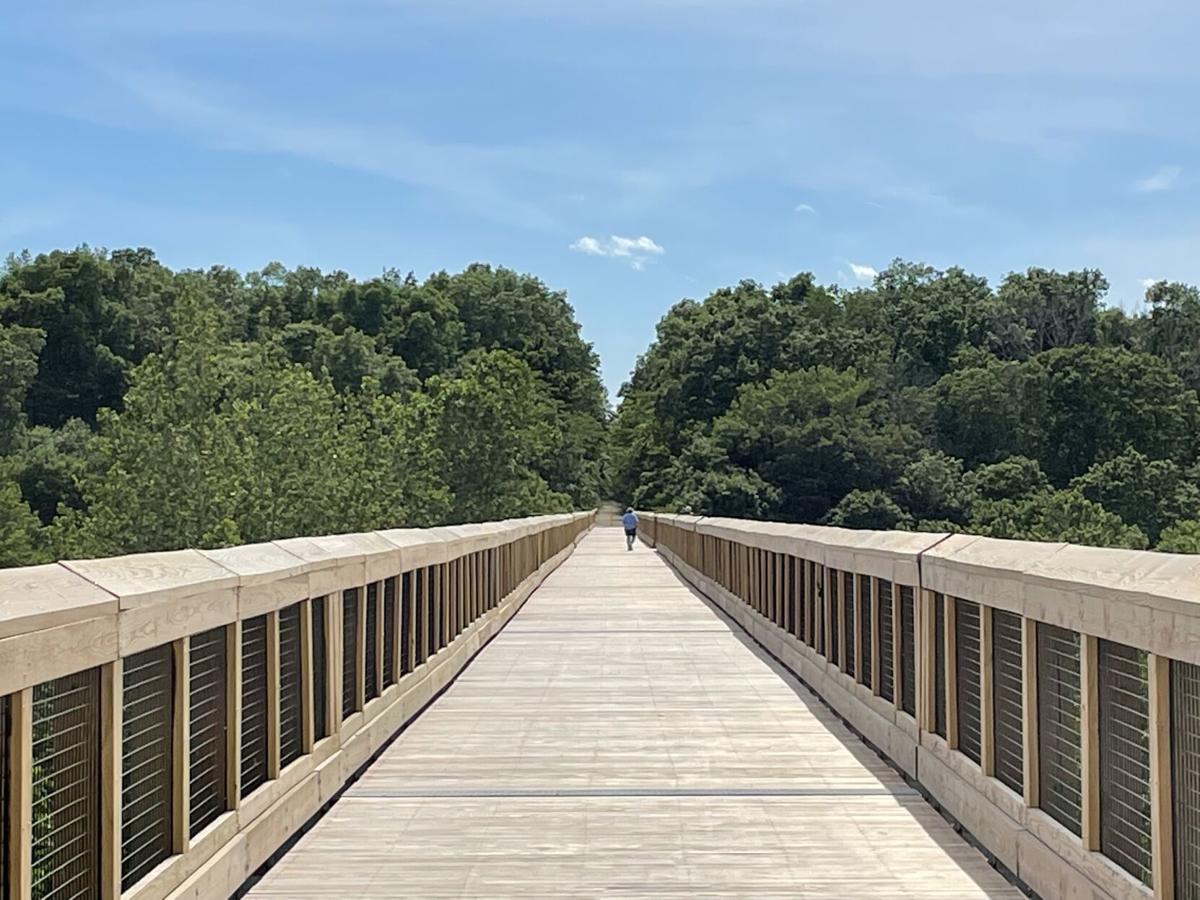 Walkers and bicyclists travel across the bridge that is now open as part of the Kickapoo Rail Trail in Vermilion County near the fairgrounds. 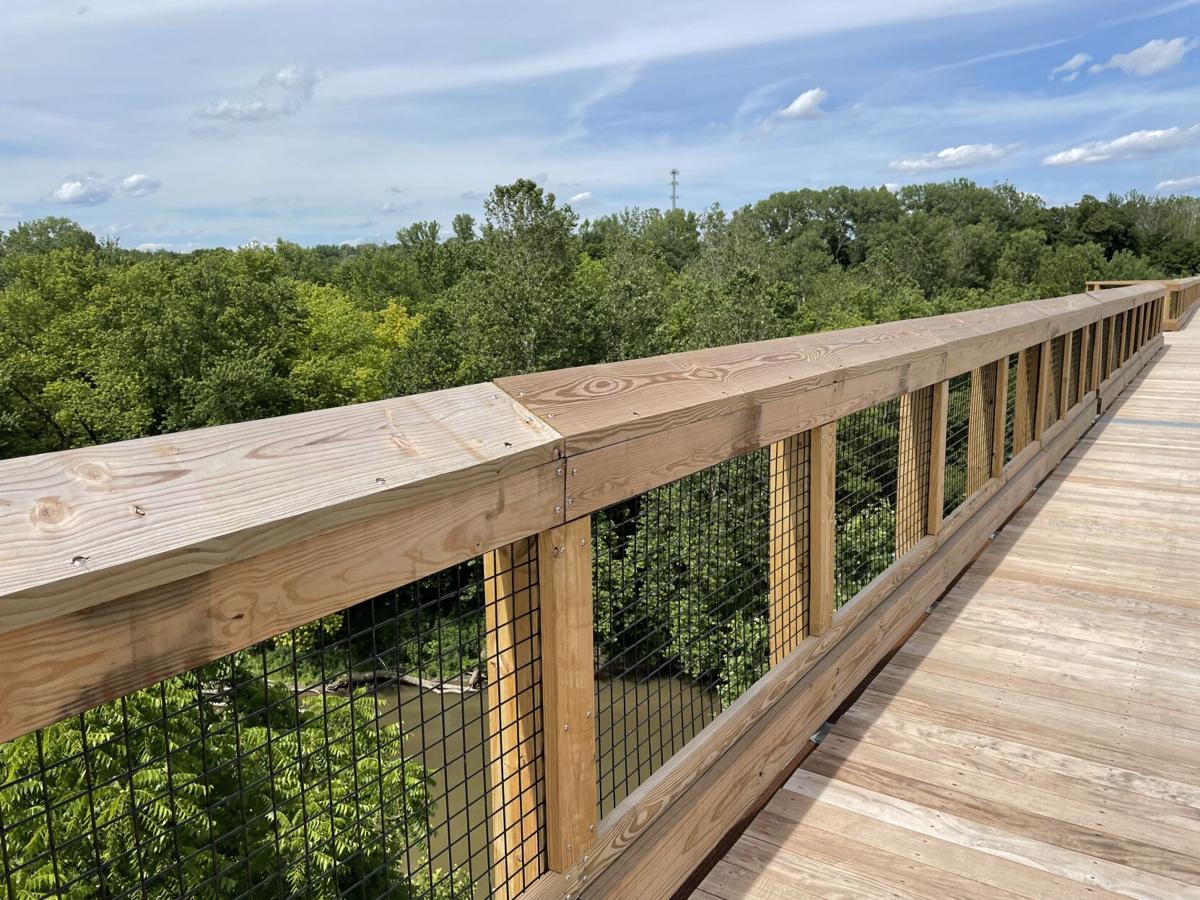 A river view from the newly-opened bridge along the Kickapoo Rail Trail near the Vermilion County Fairgrounds.

Walkers and bicyclists travel across the bridge that is now open as part of the Kickapoo Rail Trail in Vermilion County near the fairgrounds.

A river view from the newly-opened bridge along the Kickapoo Rail Trail near the Vermilion County Fairgrounds.

As of Friday, the Kickapoo Rail Trail bridge construction on the Vermilion County trail portion was closed out (relieving the contractor of liability), according to the Illinois Department of Natural Resources.

“The public can use the trail, but our parking lot project is still ongoing. We anticipate that will be finished in August and we will have an official ribbon cutting at that time,” according to Illinois Department of Natural Resources’ Louis Yockey, Region 3 landscape architect, through an email.

“I’m not sure where to tell the public to park. Ideally people on bikes would either come from Oakwood or from Kickapoo park through the fairgrounds. Some cars are parking along the fairground road (or in the fairground parking lots) but I have no authorization to say that it’s OK,” Yockey stated.

A 20-car parking lot with a vault toilet and other trailhead facilities will be located along Route 150, east of Grey’s Siding Road. It’s being constructed by Grunloh Construction for $364,000.

Friends groupThe KRT is starting a Friends of the Kickapoo Rail Trail group.

A Friends of the Kickapoo Rail Trail Update and Re-Imagine Gathering will be from 6 p.m. to 8 p.m. Thursday, June 24 at the Oakwood Village Park Pavilion, West Longstreth Street, Oakwood.

The Friends of the KRT Group will support and help raise awareness through events, membership drives and more. Dinner with fried chicken with side dishes will be served.

6:45-7:30 p.m. – What is a Friends Group? How do we successfully develop a cohesive Friends Group between the two counties? What role would you like to have with the KRT Friends Group?

7:30-8 p.m. – The last part of the evening could be the Friends discussing their next steps and set the next meeting date

According to Danzl, “We have had a lot of interest from the general public across Vermilion and Champaign County with how they can get involved and help support the Kickapoo Rail Trail. They want to be more than just a volunteer that helps collect trash once a month along the rail trail; they want to help fund raise for construction, raise support and awareness, etc. The government landowners of the KRT (Vermilion County Conservation District, Champaign County Forest Preserve District, and the Urbana Park District) are asking these willing volunteers to create a ‘Friends of the KRT’ Group.”

“We started having meetings in early 2020 but covid made communication and meetings difficult so it’s been a while since they have met so we are having this gathering meeting to start the process in gear again. We have about 15-20 people RSVP’d,” she stated.

Halverson Construction constructed the 1.5 mile KRT section through Kickapoo State Park from Gray’s Siding Road to the Vermillion County Fairgrounds. The trail runs along Route 150 east of Oakwood and continues to the trestle bridge over the Middle Fork River to Kickapoo State Park.

The section with the 1/4 mile long (1,291 feet) railroad bridge over the Middle Fork of the Vermilion River connects to the trail to Oakwood completed in 2019.

According to Yockey, 80 percent of the $3,038,480 bridge section project was paid for through a federal transportation enhancement program grant awarded to the Vermilion County Conservation District, with the IDNR providing the remaining local match dollars.

The first phase of construction in Vermilion County by Cross Construction was on the almost 2-mile section extending from the western edge of Oakwood, west of Oakwood Street in Oakwood, to Gray’s Siding Road in the area of Dunbar Bucktown Tree Farm.

Engineering and construction cost about $900,000. Funding came from donations and an Illinois Transportation Enhancement Program grant.

“The bridge is going to be a big draw,” Vermilion County Conservation District Executive Director Jamie Pasquale has said.

A large portion of Halverson’s construction work was placing the new wooden bridge deck with metal framing on the existing trestle bridge for KRT users to cross the only national wild and scenic river in Illinois, the Middle Fork River.

Halverson started removing the railroad tiles from the trestle bridge in 2019 and also removed some large trees that were in the path of the trail to prepare for the path. The bridge section is owned by the IDNR.

The Vermilion County portion is about 3.5 miles and potentially longer.

The long term vision is to acquire the 4.3 mile CXS railroad corridor from the Vermillion County fairgrounds to Ellsworth Park in Danville, and then from there, connect the park to Downtown Danville riverfront development, IDNR and other local officials have said. Until CXS files for abandonment of that section of the railroad, they are not able to railbank the corridor, or negotiate with CSX to acquire it.

There’s also been discussion of possibly putting in a playground at the Oakwood KRT section.

Pasquale has said the KRT has been talked about for more than 20 years and having it become a reality is another great accomplishment for this area.