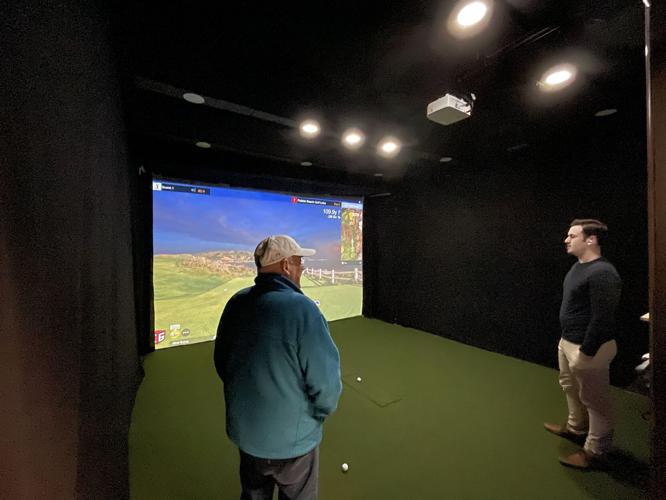 Bob Peavler Sr. of Danville, left, talks with Up & Down Golf Simulator owner Dave Schmidt in one of the golf simulator bays at the business in downtown Danville recently. 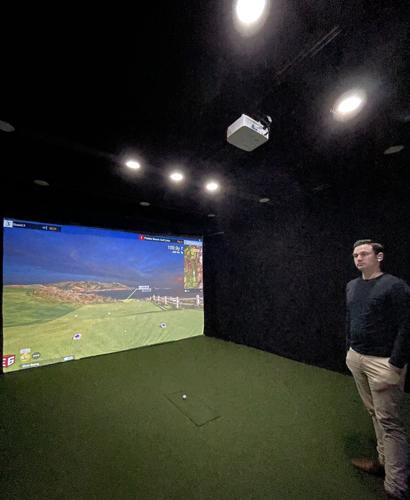 Up & Down Golf Simulator owner Dave Schmidt in one of the business’ golf simulator bays. 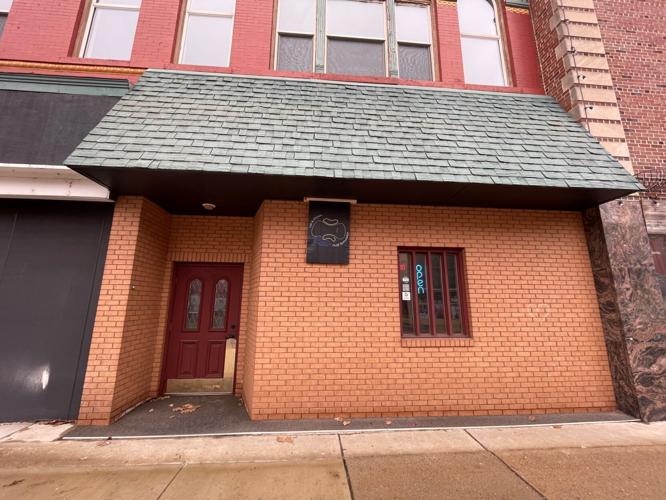 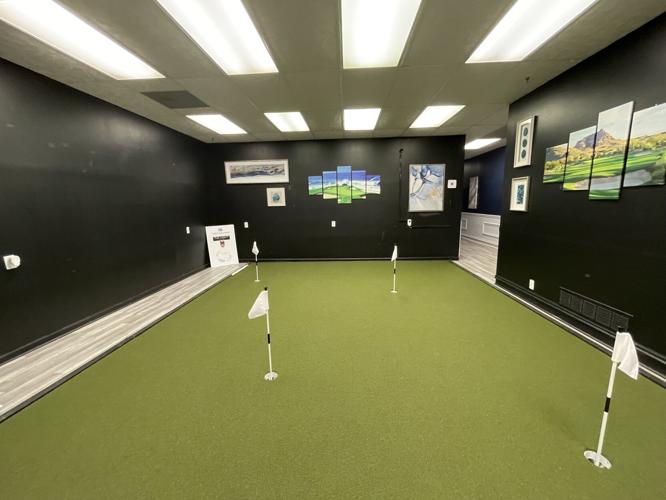 The putting green inside the business.

Bob Peavler Sr. of Danville, left, talks with Up & Down Golf Simulator owner Dave Schmidt in one of the golf simulator bays at the business in downtown Danville recently.

Up & Down Golf Simulator owner Dave Schmidt in one of the business’ golf simulator bays.

The putting green inside the business.

DANVILLE — Winter in Illinois is often a boring time for avid or novice golfers wanting to improve their game.

With golf courses closed for the season, more indoor golf facilities and golf simulators are available in the region to keep those golf skills sharp and continuous.

Up & Down Golf Simulator, 110 N. Vermilion St., in downtown Danville, has been open for more than a year now and continues to see new golfers.

Owner Dave Schmidt, of Danville, opened the business in October 2021.

Schmidt converted the former law office into a putting green with a sitting lobby area for people and three golf simulator bays.

Schmidt is a golfer and thought others also would like to have something close by to enjoy golf year-round.

“I just kind of saw a need for something,” Schmidt said about opening the business. “Danville’s got a huge golfing population. We have four courses in the area. Those golfers have nowhere to go for six months of the year.”

He said the golf simulator provides a realistic golf experience.

“A golf simulator is more like real golf than it is like a video game,” Schmidt said. “So, you’re using real equipment. You’re using a real ball. You’re swinging full speed. The radar is accurate, within a yard or two. It’s more like playing on a course.”

Play can be single player fun or competitive for couples and groups, with a maximum of four people in a bay. People can play a scramble like golfers will play on a course.

The business has three bays which can be rented on an hourly basis. Schmidt said they recommend a certain amount of time based on the number of holes someone is trying to play.

Some people may not want to play a round of golf. There are 16 games more considered like Top Golf location play, family fun for anybody, Schmidt said.

The courses are more for people serious about golf, he added.

High-end simulators and software are used, and customers can choose from 106 courses including some of the most famous in the world such as Pinehurst, Pebble Beach Golf Links, Torrey Pines and Innisbrook Copperhead.

Schmidt said players can virtually experience some of the golf courses that people see on television a lot, too.

You can book times through Up & Down’s website at www.upanddowngolfsimulator.com. One must be at least 16 years old to play on their own, or younger children can play with their families.

The cost is $30 per hour for a bay. There isn’t a charge per person. They recommend an hour per person if the goal is to play 18 holes.

It can come out to about $30 a person, similar to regular golf costs, Schmidt said.

Up & Down has a set of golf clubs at the bays for people who are just starting out and don’t have their own. People also can bring their own.

Schmidt said birthday parties and other gatherings are being regularly scheduled. He had two during a weekend earlier this month and another one scheduled for another weekend.

They offer full facility rentals for $90 an hour. Those having a party can bring in their own table and food. They have the lounge area to use.

The golf simulator also is being used by area groups.

Oakwood High School’s golf team practices there once a week during its season, and the Vermilion County Bobcats hockey team also plays there.

Up & Down also has once-a-week adult golf leagues. Schmidt said it’s a team scramble and set up on a point system.

“If you have a bad week, it doesn’t take you out of the tournament completely,” he said. “It’s a ton of fun. It’s more just laid back ...”

Schmidt said downtown Danville was his No. 1 choice for locating the golf simulator.

“Downtown Danville, I think in my opinion, has come a long way. It’s really a good place to be right now. We have a lot of new businesses opening up and doing quite well and being successful,” he said.

He said the business is seasonal. During the summer, they don’t expect to be busy.

“A simulator is never going to outcompete a course,” he said.

“The community reacted amazing the first year. We were booked up our whole on-season basically,” Schmidt said.

Walk-in traffic also occurs daily with inquiries and people wanting to check it out.

One recent walk-in was Bob Peavler Sr. of Danville who said he had wanted to come in sometime and see what it was like. He asked questions and said he was looking forward to coming back.

General hours are 11 a.m. to 10 p.m. Monday through Friday and 8 a.m. to 6 p.m. on Saturday and Sunday. It’s staffed fall, winter and spring. During June through August, it’s staffed just when someone pre-books ahead and wants to play.

Schmidt said a high school student who works a few hours a week with him.

Most people are golfers who come there, but some are just looking for something fun to do on a Friday night, he added.