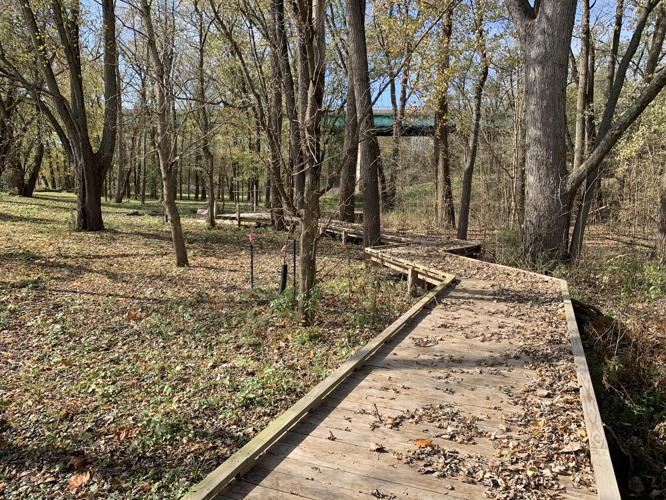 The city’s riverfront boardwalk down from the David S. Palmer Arena. 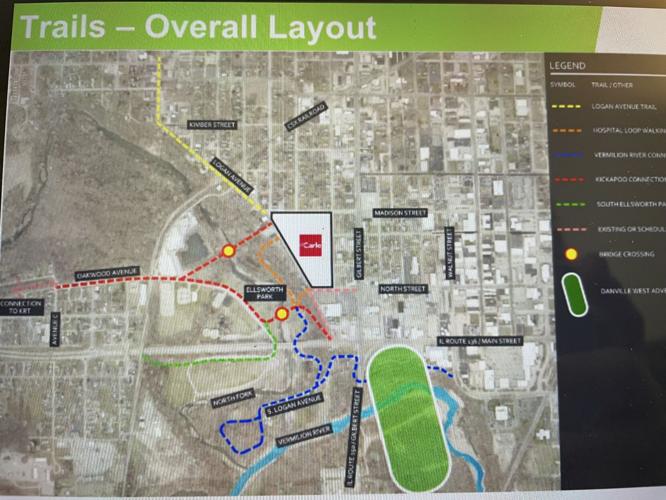 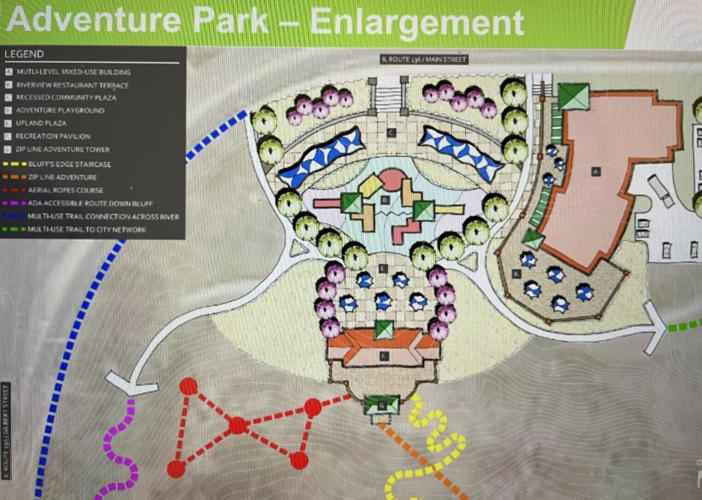 Adventure Park proposed plans near the David S. Palmer Arena and riverfront area including a zipline and ropes course.

The city’s riverfront boardwalk down from the David S. Palmer Arena.

Adventure Park proposed plans near the David S. Palmer Arena and riverfront area including a zipline and ropes course.

DANVILLE — Just as decades of discussions about a casino are now coming to fruition, riverfront plans and additional trail connections on the city’s west side also are being updated and put into a master plan to finally start taking shape thanks to casino funding.

Aldermen heard first from Drew Landis, with the new non-profit Vermilion County Trail Alliance, which wants to expand recreational opportunity in the community as it relates to trails for hiking, biking and walking.

Its logo says, “Building Community, One Foot At A Time.”

They are proposing a partnership with the city to have more things to do and see in Vermilion County, starting in Danville and perhaps going wider.

The specific project deals with the west side of Harrison Park and a lakeside trail.

The trail would be about a 12-mile multi-use pedestrian trail system on the west side of Harrison Park and undeveloped city lands to the north. The system will feature a contrast to other local trails. The group plans to restore some of the historical infrastructure there. In the late 1930s there were trails, cobblestone bridges, a pavilion and picnic areas put in.

Landis said they’d like to have community events there, such as a competitive hike/run 5K course, and a cycling course for high school students.

Phase 1 would be seven and a half miles of single-track/hiking that could be completed this summer. They’ve mapped and flagged a lot of it already. No city expenditure is necessary.

An International Mountain Bicycling Association trail accelerator grant would be sought in June, with award in September, for professional design services. The group also would approach other donors and seek other grants, such as through Vermilion Healthcare Foundation and Ameren.

Further restorations would be through the next several years.

“The ball’s already rolling and it’s pretty quick wins for us to be able to proceed here,” Landis said.

“This is a really promising opportunity for everyone and we’re really eager to present it to you and get started,” Landis said.

The city council next month could act on an agreement with the group for using public land, such as for the city doing possible mowing or snow or garbage removal or other minimal efforts as city staffing allows.

The plan includes a Kickapoo Connection Trail extension to Danville. The KRT extension to Danville may terminate at Avenue C. A trail connection is recommended to extend from the KRT along Oakwood Avenue to Ellsworth Park across the North Fork of the Vermilion River, and to the intersection of Illinois Route 150 and Logan Avenue.

Two bridge replacements are included for crossings over the North Fork of the Vermilion River. These structures are to replace the now closed Mill Street Bridge and the Ellsworth Park Pedestrian Bridge.

A 5-feet-wide paved walking trail is recommended to connect the existing sidewalk along Illinois Route 150 to Ellsworth Park, including switchback and/or stairs for the steep grades. The Vermilion River connection trail begins as a 10-feet-wide paved multi-use trail near the east side of the Ellsworth Park pedestrian bridge and meanders south through the park. Before traveling under the Illinois Route 150 overpass, the trail transitions onto the existing park roadway surface. Trail users also use the existing roadway surface of South Logan Avenue and an alley connecting to Victory Monument Plaza. A paved multi-use trail takes users from the plaza, south across parcels owned by the city, under Gilbert Street and connecting to future development along the river. The Vermilion River Connection Trail also connects to the river via a loop trail extending out into a land peninsula, and includes a segment of paved multi-use trail behind the civic center along the south side of Reiker Court.

Other trails discussed are a 5-feet wide paved loop walking trail near the new Carle facility along the bluff of the North Fork of the Vermilion River, and a Logan Avenue Trail south of West Williams Street.

Mulvey said the city can use this plan for state and federal grant opportunities.

The riverfront development concept includes and excludes ideas discussed in the past with University of Illinois students and others.

Included is a multi-million-dollar Danville West Adventure Park. The upper plateau area would include the flat portions that abut Main Street near the civic center. Parking could be expanded, a new two-story building is proposed with a potential restaurant or ice cream or coffee shops; an adventure playground with zip lines, climbing nets, ropes course and towers, slides and a tree house; and a community plaza with sheltered seating areas for farmers’ markets, art fairs and other events.

To traverse the bluff and slope, the plan recommends three alternatives: a bluff’s edge staircase to connect to the boardwalk on the north side of the river; multi-use trail on the existing service road; and a zipline adventure to the south side of the river, and possibly other zip lines. Improved pedestrian infrastructure either on or added to the Gilbert Street Bridge also should be considered, the plan states.

This would be a phased approach and working with partners, said Mayor Rickey Wiliams Jr.

The committee heard from resident David Techtow, a South Logan Avenue resident, about the south Logan trail, south of Main Street going down the street where he lives. He said the property is not city-owned, and he doesn’t want a bike trail going in his backyard.