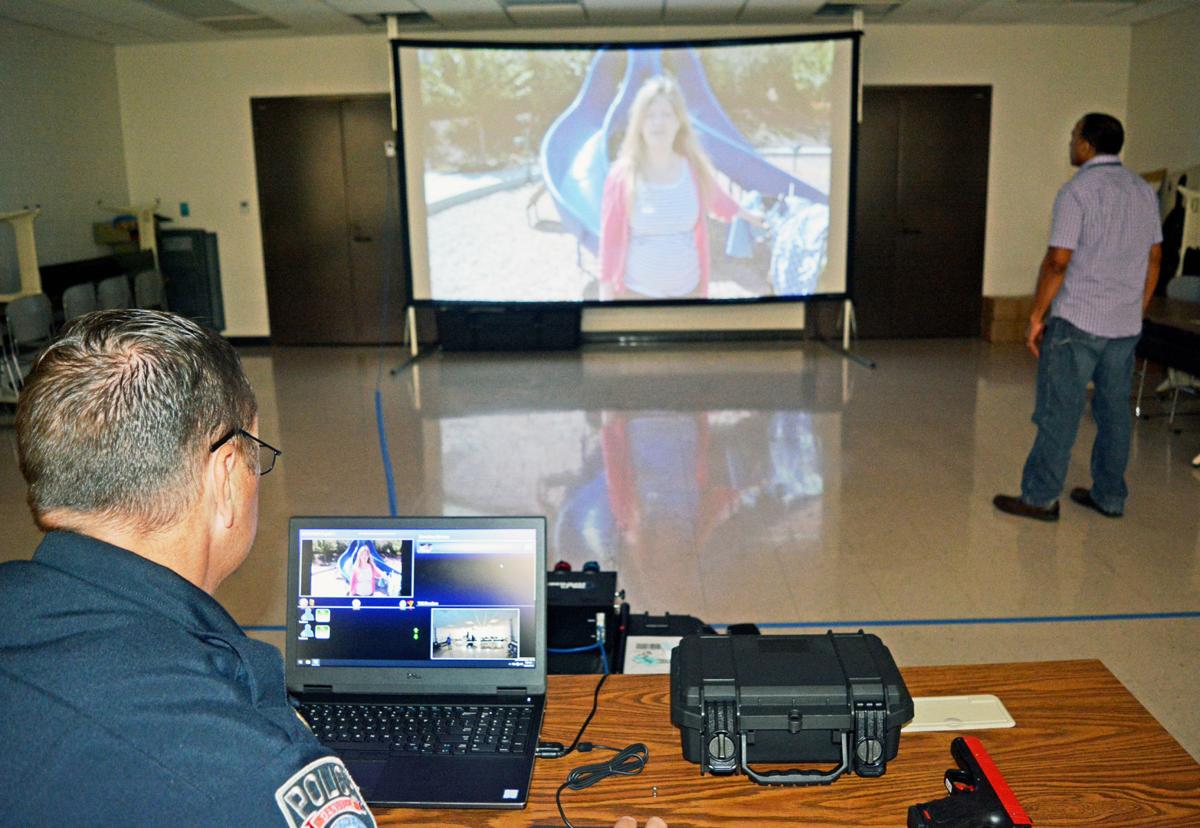 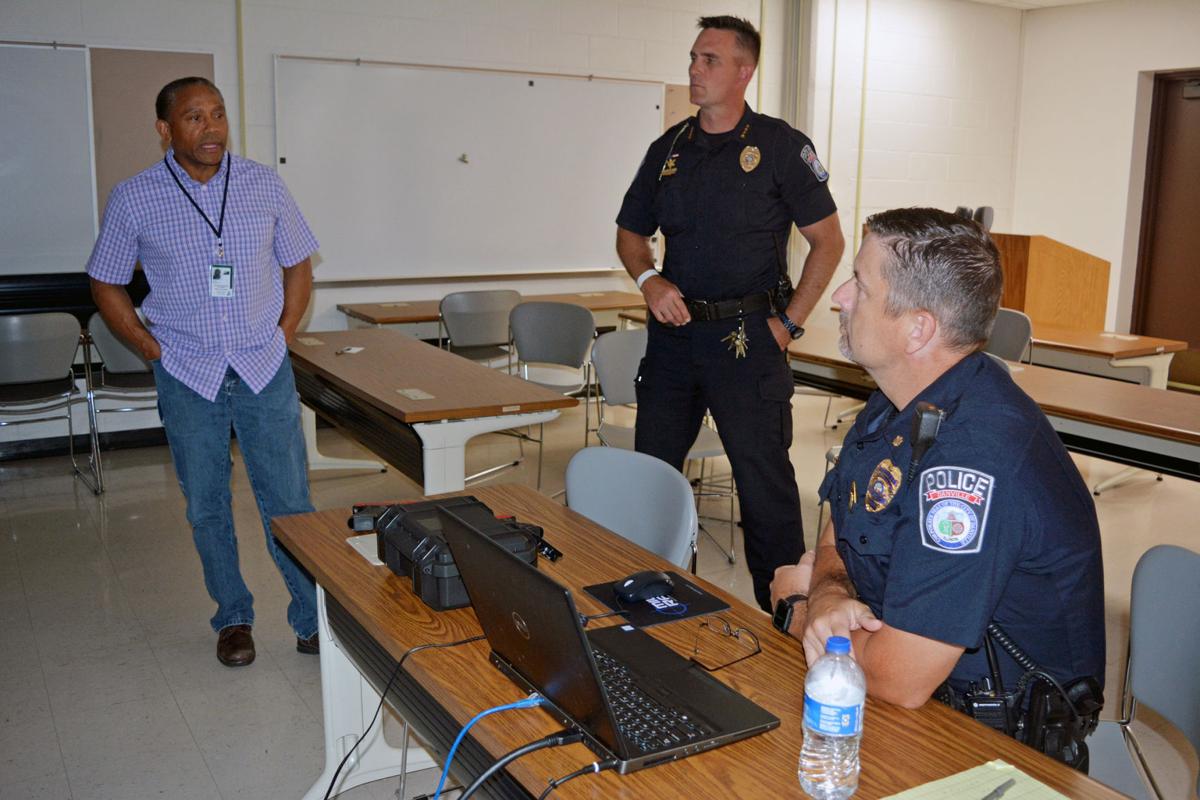 DANVILLE – A police officer walks along a wooded path and encounters the woman who summoned the police for help with a noise complaint.

Without any additional information from the woman, the officer continues down the path to an old metal machine shed where a man appears to be working on a table saw. The officer calls out to the man as he slowly approaches him. The man suddenly turns and opens fire on the officer, and the officer returns the gun fire, killing him.

A woman then appears from within the shed and runs toward the officer, swinging her arms and rapidly throwing punches with her fists. It’s a blur of action in those few seconds, but the officer determines the woman is unarmed and decides not to use deadly force.

This narrative is one of 900 crime-simulation scenarios that MILO — a high-tech, interactive system — can present to train Danville Police officers and others on how to respond effectively and humanely in emotionally charged situations.

The program, which would have shown up to 80 teens a day the everyday work of law enforcement, ended up being postponed when schools statewide closed because of the COVID-19 pandemic.

Still, Williams persuaded the college to purchase the MILO system to provide the college’s criminal justice students with real-life experiences in policing.

“It’s an extremely valuable tool for teaching and for training because the system runs scenarios that are true-to-life,” Williams said. “It will give our students an advanced view of what professionals in the criminal justice field face in the line of duty.”

DACC has been on a four-year track to bring more technology into the criminal justice program, starting first with computers, then live-scan fingerprinting and finally drones, Williams said.

The MILO system arrived in May and is set up temporarily in Danville’s Public Safety Building where it is being shared with the Danville Police Department.

Police Chief Chris Yates said he had been looking into renting a similar system when he learned that DACC President Stephen Nacco had approved the purchase of a MILO system.

“We experienced a 60 percent cut to state funds for police officer training, and that was prior to COVID-19,” he said. “We have to be proactive in finding alternative methods of training.”

During the first week of June, the Danville Police Department had the opportunity to see the new MILO system up close. The police department immediately began providing refresher training for officers — those fresh out of the Police Academy as well as senior officers. The plan is to provide this training continuously to the police department’s 64 officers as well as to the Vermilion County Sheriff’s Department.

“It is a huge logistical task to do live role playing,” Yates said. “This system will supplement and enhance what training we already do.”

DACC also will use the MILO system to teach criminal justice students who may be interested in pursuing a career in law enforcement.

“MILO will be effective in recruiting students to come to DACC and choose to pursue a college degree in criminal justice,” Williams said.

Although DACC paid for the system, the involvement of the Danville Police Department in the development and continued enhancement of MILO has increased the system’s value.

As Danville Police officers train using MILO, they are helping to narrow down the hundreds of scenarios for situations that police officers might encounter on the job by setting aside the scenarios that will be the most useful for DACC’s criminal justice program.

“The majority of our officers have gone through multiple scenarios,” Yates said. “We can say, ‘This is a good scenario;’ for example, a high-frequency call that could be high-risk or low-risk, and we can save it in a folder in the system.

“We’ve been working with it for about three weeks,” he said. “It was best for us to get everything aligned and get an understanding of the product. We’re in the infancy stages of what this could be.”

Not only is MILO beneficial for the Danville Police Department, DACC’s criminal justice program and the Vermilion County Sheriff’s Department, it also can be used as a learning tool for other professionals, such as attorneys, mental health workers and corrections officers.

Through the use of artificial-intelligence technology, the scenarios may have several different outcomes based on how officers react within the scenario.

“We can make the scenario whatever we want it to be,” Yates said. “There are 900 different scenarios and four to six reiterations of each scenario.

“Each scenario can go five or six different ways depending on how the officer communicates with the people on the screen and the action that the officer takes,” he said. “The computer changes the response of the role player, leading to either positive or negative consequences.

“We have training on the use of force and on de-escalating situations,” Yates said. “Ninety-nine percent of our calls don’t involve pulling out a weapon; it’s de-escalating, it’s counseling.

“This system lets us hone our skills by slowing time down so the officer can look at all the options (in a scenario),” he said.

Other scenarios speed up an officer’s critical thought process, especially when the officer is in imminent threat of great bodily harm, Yates said.

Williams agreed. “These are split-second decisions. It’s life or death.”

“We can run four different officers in the same scenario,” he said. “There are a lot of emotionally distanced people scenarios that I run my new officers through.

“After a training session, we debrief and talk about what they could have done differently,” he added. “It’s great training. It’s a great refresher for our officers.”

The system also can record how many shots are fired from the special fake guns that the officers use during training.

“Our society is getting more unhealthy, and we are asking our officers to be psychologists, too,” Williams said.

Yates agreed. “Many times we have to switch gears from being an enforcer to a counselor.”

DACC’s Liberal Arts Dean Penny McConnell sees the MILO system as being beneficial to students in many other fields of study.

MILO also may offer the community some insight and empathy for the police, who can be thrust into life-or-death situations that require split-second decisions.

“I think if we allowed the public to try out MILO, people would be able to appreciate the difficulties that police officers face and would be more understanding when they interact with police officers,” McConnell said.

The college also will consider offering a Community Education class with the MILO simulation system for local residents. In addition, Corporate Education could use MILO with many of their clients as a supplement to active shooter training.

The MILO system eventually will find a permanent home on the Danville campus in a location that would allow convenient access for DACC students as well as Danville Police officers. One venue under consideration is the “Drill Room” in the former U.S. Army Reserve Center.