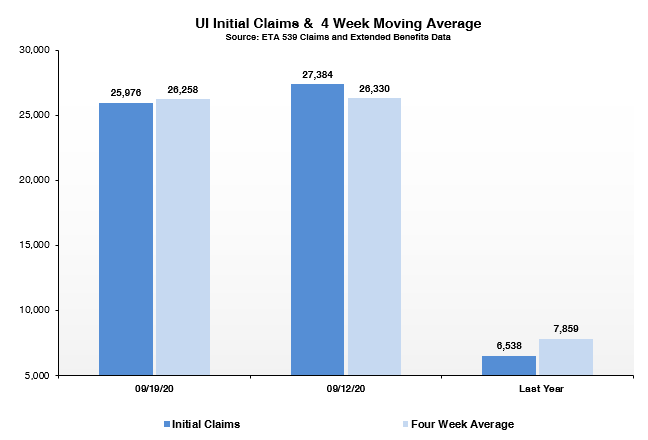 SPRINGFIELD – Hospitalizations for COVID-19 have jumped sharply, according to the latest data from the Illinois Department of Public Health, while the number of continued unemployment claims in the state increased from the week prior.

Hospitalizations and intensive care bed usage by persons with COVID-19 increased to highs not seen since June as of the end of the day Wednesday. While the numbers often fluctuate significantly on a daily basis, the 1,713 hospitalizations for the virus were the most since there were 1,852 on June 18. The 400 intensive care beds in use by COVID-19 patients were the most since 401 were occupied on June 29. Approximately 35 percent of beds and 38 percent of ICU beds were available statewide, according to IDPH data.

There were 155 ventilators in use by COVID-19 patients, with roughly 78 percent of the machines still available.

The state reported another 2,257 confirmed cases of the virus Thursday among 62,071 test results reported, making for a one-day positivity rate of 3.6 percent. That kept the rolling, seven-day average rate at 3.5 percent for the sixth day in a row.

Another 30 virus-related deaths drove the total to 8,538 among 281,371 confirmed cases since the pandemic began. Nearly 5.3 million tests have been conducted.

Officials urged Illinoisans to get their flu shot this year to avoid further strains on medical infrastructure.

“This season more than ever, it is critical that Illinoisans get our flu shots,” IDPH Director Dr. Ngozi Ezike said in a statement. “Flu and COVID-19 each can cause serious respiratory illness and co-infection could possibly lead to more severe illnesses, hospitalization, and even death. While a vaccine for COVID-19 is still in development, a vaccine for flu already exists and is your best protection against flu.”

Meanwhile, the economic effects of COVID-19 and associated economic restrictions continue to show in Illinois and nationwide.

There were 870,000 first-time unemployment claims nationwide for the week ending Sept. 19, including 25,976 in Illinois, according to the Illinois Department of Employment Security. For the state, that was a decrease of 1,408 from the previous week, but the number of continued claims rose by 28,938 to 538,496.

The number of nonfarm jobs decreased since last year in all 14 Illinois metropolitan areas in August, with five metro areas at record low payrolls for the month, according to preliminary data from the U.S. Department of Labor and IDES.

The August unemployment rate was 10.9 percent statewide, the highest rate recorded since 1983, when it was 11.3 percent.

Bloomington had the lowest unemployment rate at 7.2 percent, which was an increase from 3.8 percent a year ago, followed by Champaign-Urbana, which increased to 7.4 percent from 3.9 percent.

Other areas ranged from 8.1 percent to 9.6 percent.

The city of Danville's unemployment rate in August was 11.9 percent. It was 12.3 percent in July.

Capitol News Illinois is a nonprofit, nonpartisan news service covering state government and distributed to more than 400 newspapers statewide. It is funded primarily by the Illinois Press Foundation and the Robert R. McCormick Foundation.

It is with great sorrow that we announce the death of the beloved father and friend, Frank Burke. Frank was born in Chicago, IL to Gunner and Elizabeth Burke along with his sister Marcela. Frank was married to Anna Lee Burke (nee Kellogg) on July 2 1978, sadly his beloved Anna passed away in…