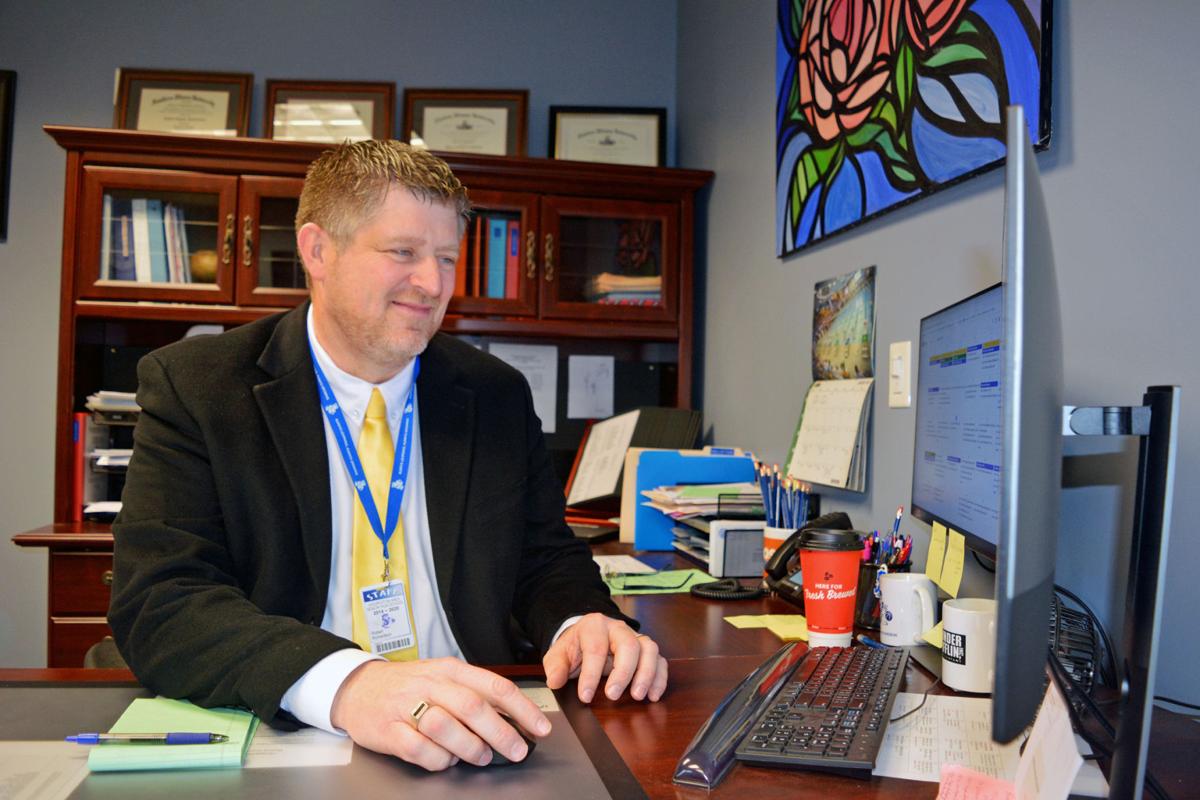 Hoopeston Superintendent Robert Richardson supports a proposal to add 1 percent to the sales tax rate in Vermilion County to fund improvements to school buildings in his district. 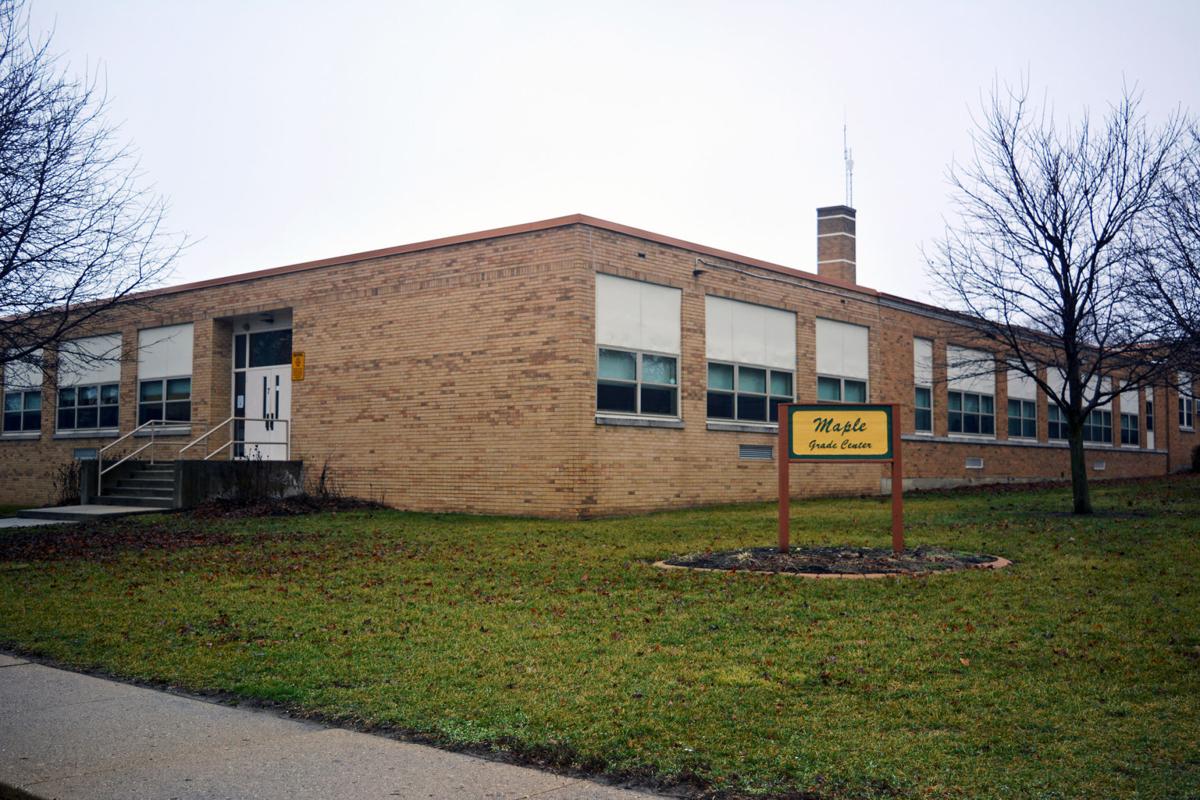 Maple School in Hoopeston is one of the schools that would benefit if voters in March approve adding a 1 percent County Schools Facility Tax to the sales tax rate in Vermilion County. The Hoopeston school district would realize a $430,000 increase in revenue annually that would be used for school building improvements.

Hoopeston Superintendent Robert Richardson supports a proposal to add 1 percent to the sales tax rate in Vermilion County to fund improvements to school buildings in his district.

Maple School in Hoopeston is one of the schools that would benefit if voters in March approve adding a 1 percent County Schools Facility Tax to the sales tax rate in Vermilion County. The Hoopeston school district would realize a $430,000 increase in revenue annually that would be used for school building improvements.

DANVILLE – School districts around Vermilion County are seeking public support once again for a 1 percent countywide increase in the sales tax rate, two years after the same measure was voted down.

The school boards of 10 Vermilion County school districts – not including Danville District 118 – have voted to place the sales tax issue before Danville and Vermilion County voters in a referendum on the March 17 primary ballot.

A law enacted in 2007 allows school districts representing 51 percent or more of a county’s student population to seek approval to assess an Illinois County School Facility Tax of up to 1 percent.

Fifty-six of 102 counties in Illinois assess a county school facility tax, including Champaign, Edgar and Douglas counties in east central Illinois, according to the Illinois Association of School Boards.

Regional Superintendent Cheryl Reifsteck said, “It is not unusual for it not to pass on the first try.”

“The first time it’s on the ballot people don’t understand what the purpose of it is,” she said of the tax. “It would bring property tax relief and a way to pay down bonds that were issued to maintain buildings.”

The law has been amended in the two years since the last time the sales tax issue came before Danville and Vermilion County voters.

“The only change is it now allows this tax money to be used for school security and mental health issues,” she said.

Reifsteck said she received paperwork last month from the last school board in Vermilion County — not including Danville District 118 — to have voted on a resolution in support of bringing the county school facility tax issue before the voters. The school districts had until the beginning of January to vote on the resolution and submit the supporting documents to Reifsteck’s office.

“All the districts filed their paperwork before Christmas and represent more than 50 percent of the total student population for Vermilion County,” she said. “Danville District 118 is the only one that didn’t file.”

The other county school districts did not need Danville’s support because District 118 does not serve the majority of the students in the county.

Due to a decline in student enrollment in District 118 since 2014, only 42 percent of the total number of students in Vermilion County attends District 118.

Reifsteck also certifies the wording of the referendum question and files it with the Vermilion County Clerk and the Danville Election Commission so the county school facility tax question appears on the March 17 ballot. A simple majority vote is required for passage of the tax.

If Danville and Vermilion County voters approve the sales tax hike in March, the new tax would begin to be collected July 1.

The Illinois Department of Revenue would direct the county school facility tax dollars – which would generate a total of $5.4 million annually — to the Vermilion County Regional Office of Education, where it would then be distributed to the local school districts on a per-pupil basis.

Since the amount of money a school district would receive from the tax is based on the district’s student enrollment, Danville District 118 would benefit the most by receiving about $2.27 million in new revenue each year.

In Westville, the 1 percent sales tax would generate $600,000 in new revenue – or 11 percent of the total new sales tax collected — for the district annually, Superintendent Seth Miller said.

Miller said the district’s current tax rate is $5.08 per $100 equalized assess evaluation that it levies every year from property owners within Westville’s school district.

“Sixty-six cents of that goes to pay for debt we’ve accrued to repair and maintain buildings,” he said.

“If the sales tax was in place, there would be a 13 percent reduction in the property tax that the (Westville) school district collects,” he said.

Miller said the new revenue from the penny sales tax would allow the Westville School District to provide new services and improve facilities.

“State legislators expanded the uses of that tax, so we could pay for school resource officers and mental health providers,” he said.

“One of our priorities after property tax relief is contracting through the city for a full-time resource officer to be in our district all the time and paying for some long-range facilities improvements,” Miller said.

“We also would expand our early childhood offerings and build an auditorium at the high school,” he said. “There are only two high schools in the county that have an auditorium. Our band kids play in the cafeteria or gym.”

Hoopeston Superintendent Robert Richardson said, “Our board passed a resolution to put it to the voters and now our goal is to educate the public.”

The 1 percent sales tax would generate $430,000 in new revenue annually for the Hoopeston School District.

“We would put in air conditioning at John Greer and Maple School,” Richardson said of the extra revenue. “That is our priority along with lessening the property tax burden.”

Installing air conditioning at the two elementary schools would improve the comfort level for students and teachers, he said.

“We try to provide the best learning environment for our students, but we are teaching 21st Century learning in early 20th Century buildings,” he said.

Richardson said the district has a list of improvements it would like to make if extra money was available.

“We have aging facilities we’d like to improve,” he said. “I look at the nice schools, like Tolono, and think, ‘Why can’t we have that for our kids?’”

“One thing I love about this tax is the local control,” Richardson said. “We’ve identified our priority list and how we would spend it.

“But we also would need to have conversations with our people and have some town hall meetings to find out what’s important to them,” he said.

Shall a retailer’s occupation tax and a service occupation tax (commonly referred to as a sales tax) be imposed in Vermilion County at the rate of 1 percent to be used exclusively for school facility purposes, school resource officers and mental health professionals?