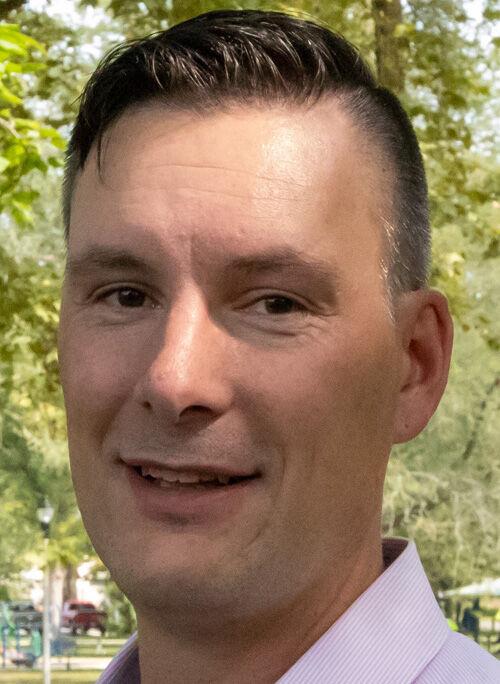 The Commercial-News sent questionnaires to the candidates for the Nov. 3 election.

Bennett, 43, of Champaign, is married to Stacy and they have two children. Education: Gibson City-Melvin-Sibley High School ‘95; Illinois State University, University of Illinois Law School. He’s employed as an attorney at Spiros Law and is a member of the Illinois General Assembly. Prior Senate Service: Appointed in 2015, Elected in 2016. Political/Community Involvement: Trustee at Urbana Free Library, Past President of the Urbana Rotary Club, Member of the Champaign County Community Justice Task Force.

Ruggieri, 43, of Savoy, is married to Jessica and they have three children. Education: Tuscola Community High School; BA from U of I, JD from Western Michigan Cooley Law School, LL.M (Masters in law) from Western Michigan Cooley Law School. Employed as an attorney at Ruggieri P.C. Previous political experience/organizations involved with: Currently serving as an elected official as a Trustee in the Village of Savoy.

1. Why did you decide to seek re-election/election to this office?

Bennett: Since arriving in the Illinois Senate in 2015, I have worked hard to increase funding for higher education, to create a more equitable funding formula for our P-12 education system, to protect safer and cleaner drinking water for our families, to pursue a criminal justice system that is more responsive to its victims, and to promote our state’s leading industry: agriculture. These are difficult tasks, but I have achieved some success in each area, and I am now seeking another term in the state senate to continue to build on these accomplishments by strengthening our economy, improving our education system and promoting the health and safety of our communities.

Ruggieri: I chose to run at this time because of the drastic change in the political climate here in East Central Illinois. The people of East Central Illinois and specifically the 52nd are tired of being overlooked as policies and laws that benefit Chicago consistently get passed while the needs of this area are not being met. We need a person that will stand up for the citizens of the 52nd district and I will.

2. What do you consider to be the most important issues concerning this office?

Ruggieri: I think the most important thing that needs to happen is to find a way to support our citizens in the wake of the COVID-19 pandemic. We have suffered not only physically, but also financially. East Central Illinois is the heartland of our state and the people who live and work here need our help. We need to come together and develop a plan that will not only keep us safe, but also allow people to move forward. Too many of our small businesses, and the employees that support those businesses, are facing circumstances that seem unsurmountable. How much longer can they get by without real help, real relief? We need to take a serious look at the legislative level to see how we are going to provide this relief.

Bennett: This job is all about representing your 215,000 constituents and making their lives a bit easier when we can. One way we can do that in the 52nd District is by protecting jobs by fighting for increased funding for education. It’s an area that can absolutely transform our state and its people. So many of our challenges can be met by thoughtful long-term planning and investing in our future. By building a strong foundation in community colleges and vocational education, we can help our current employers grow and keep their businesses here in Illinois. By encouraging and empowering our four-year institutions to innovate, as in the Research Park at the University of Illinois, we can ensure that we will grow our own companies and create new enterprises for tomorrow’s jobs.

3. What do you want the public to better understand about this office? What are challenges and how do you overcome them?

Bennett: The role of a state senator is vastly different from that of a Governor or President. Unlike those executives, a legislator cannot accomplish his goal of helping his district by acting all alone. Instead, he must build a coalition of other legislators until he finds enough votes to pass a bill: 30 in the Senate and 60 in the House. I have consistently achieved that by getting to know my fellow legislators of both political parties and listening to what issues they care about. Sometimes you can pass a bill by depending on only members of your own political party but that can be difficult with diverse caucuses where we don’t always agree. In those instances, as in my bill to protect the Middle Fork from toxic coal ash pollution, it was vital to find Republican votes—such as Rep. Mike Marron—to help me convince a few of his colleagues of the merit of my bill. The best legislators aren’t often the loudest voices in the room, but instead are those that can put together a team of competing egos to accomplish their shared goals. In addition, as downstate Illinoisans, it is increasingly difficult to find enough votes to pass a bill with just downstate legislators. A large enough percentage of the state population lives in Chicago and its suburbs that the majority of legislators live in those areas, too. So if we want to get good things done for our downstate constituents—which is our job description—it doesn’t do us any good to alienate those northern legislators with attacks on Chicago or their hometowns. Instead, we must find issues that need to be addressed in both our communities—for example, both Chicago and Danville face the challenge of escalating gun violence, as well as underfunded schools. So I look for bills that can help my constituents as well as their own—and in that way I can often find the necessary votes to effectively do my job by improving lives for my own Central Illinois constituents.

Ruggieri: The role of any representative in the state legislature is to listen to their constituents and advocate for them at the legislative level. These elected positions carry a special place of responsibility and should be held to a high standard. The state senator has a moral obligation to do what is in the best interest of his constituents when it comes to creating policy or passing legislation. They are the essence of a democracy and their ability to think freely and to accurately represent their constituents is the foundation for that democracy. When a state senator is no longer accountable to his constituents, but his decisions are rather controlled by the larger party, our democracy is put into danger. I believe that I will better represent the constituents of the 52nd district by listening and better advocating for them in Springfield.

4. What qualifications do you think make you the best candidate for this office?

Ruggieri: As I currently serve as an elected official in the Village of Savoy, I have been intimately involved in passing balanced budgets, supporting vital infrastructure products, providing community services, and working with surrounding communities to plan for the future. This has all been done while keeping taxes considerably lower than neighboring cities. Our quality of life with the lower tax burden attracts many new residents and business every year. I will take these principals with me to Springfield and truly scrutinize how our taxpayer dollars are being spent. In addition, and probably most importantly, I will listen to the citizens of East Central Illinois. I was born in the 52nd and it is my home. I have a lifetime of experiences that I hope to leverage for our benefit and highly developed leadership skills to guide my way. I will not be subject to the demands of an overreaching party and will do what makes sense for the people of the 52nd. I believe that politics should be more about coming together to solve problems than pulling us apart. I hope to work with the best that the Illinois legislature has to offer in coming to solutions that benefit everyone.

Bennett: I have a proven record of leading to improve the lives of residents in our community. During my time in Springfield, I have worked with my colleagues on both sides of the aisle to pass laws – like Coal Ash Pollution protections, securing millions of dollars in funding to improve our roads and highways and assisting community colleges like DACC, created ABLE accounts to help families with disabilities and giving survivors of sexual assault an opportunity for justice when they are ready by ending the statue of limitations that protected powerful sexual predators like Speaker Dennis Hastert. As the Chairman of the Senate Agriculture Committee, I made resources and advice available to rural families in crisis with the Farm Family Resource Initiative (FFRI). After decades of frustration, I also successfully secured a casino license for Danville to bring much-needed jobs and revenue to Vermilion County. I am proud of all I have accomplished and hope I have earned the support and trust of the people of Vermilion and Champaign Counties to serve for another term.

Ruggieri: Downstate Illinois is being controlled by the politicians of Chicago. What we have now is a supermajority that is responsible for creating bad policy and passing bad legislation for the citizens of the 52nd. This does not represent the democracy; we need to find a balance. What I can promise is that I will carefully look at policies and legislation from either side of the aisle to determine if it is truly in the best interest of the citizens of the 52nd. I will listen to my constituents no matter what party they belong to or what their opinions may be and take every point of view into consideration when making decisions for the people of East Central Illinois.W