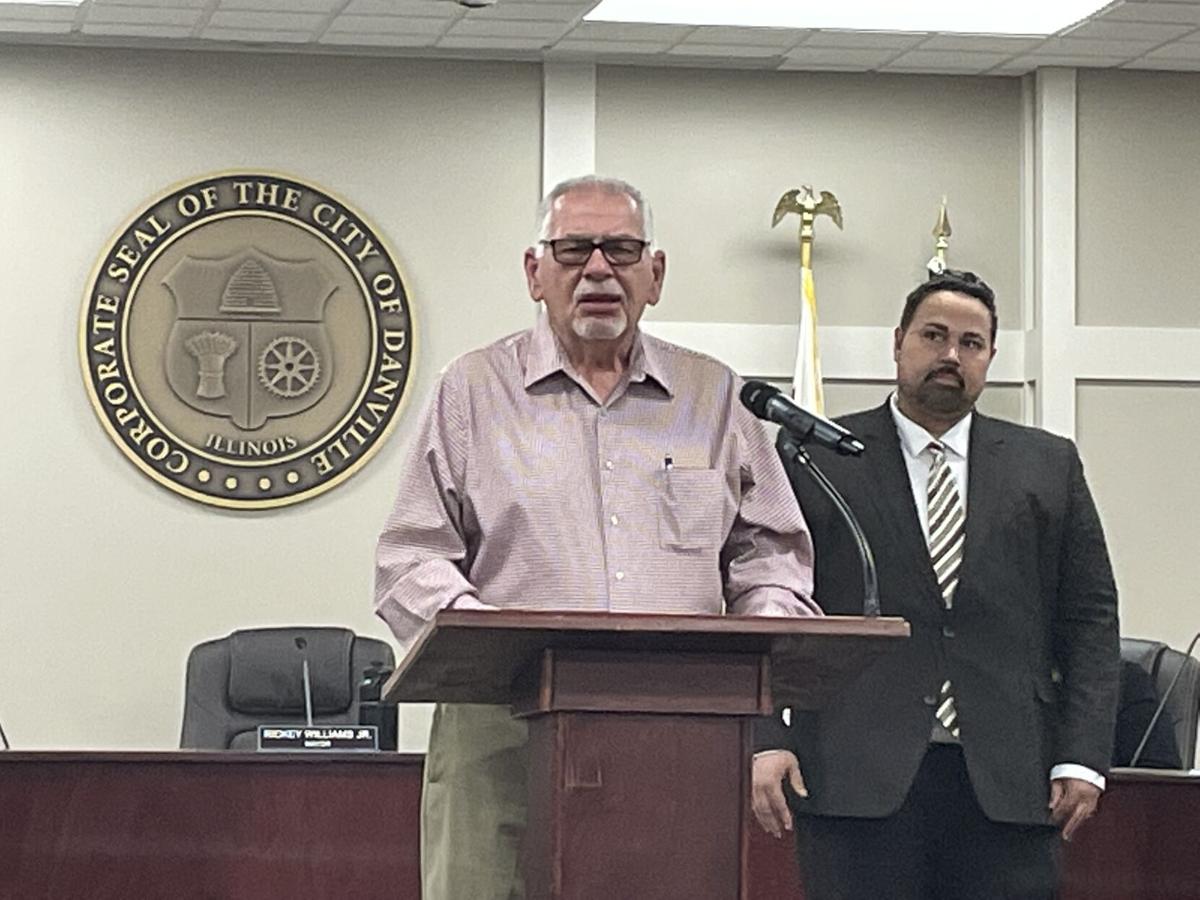 Ward 6 Alderman James Poshard got emotional Tuesday night when speaking about what an honor it is to be an alderman on the Danville City Council. Danville Mayor Rickey Williams Jr. looks on. 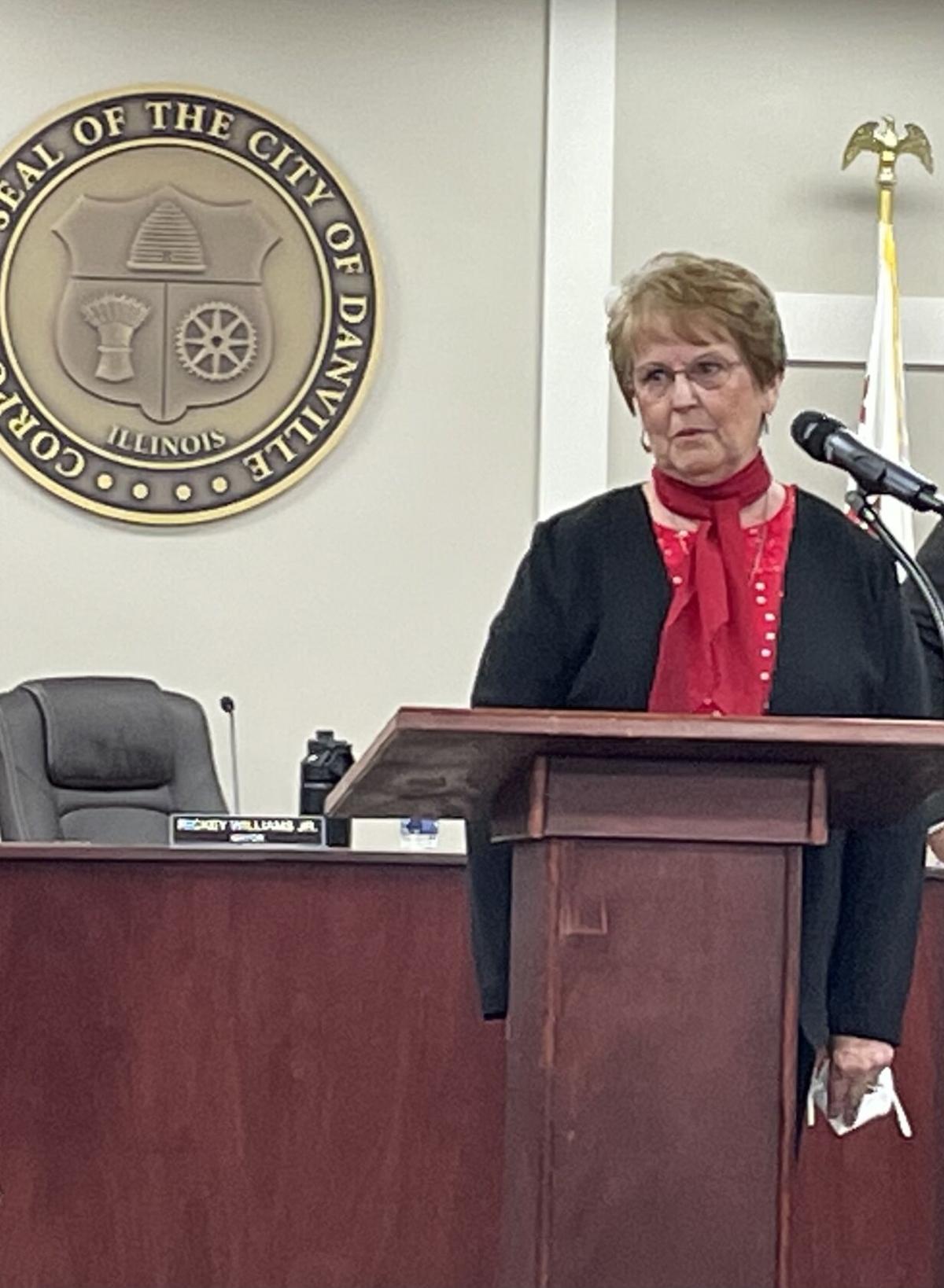 Danville City Council Ward 2 Alderwoman Carolyn Wands speaks Tuesday night after she was sworn in at the Robert E. Jones Municipal Building. As a write-in candidate, she received the most votes in the April 6 election. She replaced Dan Duncheon.

Ward 6 Alderman James Poshard got emotional Tuesday night when speaking about what an honor it is to be an alderman on the Danville City Council. Danville Mayor Rickey Williams Jr. looks on.

Danville City Council Ward 2 Alderwoman Carolyn Wands speaks Tuesday night after she was sworn in at the Robert E. Jones Municipal Building. As a write-in candidate, she received the most votes in the April 6 election. She replaced Dan Duncheon.

DANVILLE — It was an emotional, and also enthusiastic night, as seven Danville City Council aldermen were sworn in Tuesday night.

She thanked her family, friends and citizens who voted for her. Most of all she thanked her parents, who are not here, and all they instilled in her in life.

Pertell said she hopes and prays she can be a catalyst for change, and Danville deserves more in what it can be.

Ward 6 Alderman James Poshard also got emotional during his comments after being sworn in by Mayor Rickey Williams Jr.

He said it’s a privilege to serve as an alderman, and he also thanked his wife, family and everyone.

This was Ward 5 Alderman Mike Puhr’s sixth swearing in. He’s served as alderman for 20 years. He reminisced some about his years on the city council.

In Ward 4, newly elected alderwoman Tricia Teague said “this feels like what I’m supposed to be doing in my life.”

She talked about her grandparents who had more than a 60-year legacy of serving on boards.

She too thanked those who encouraged her to run for office.

Other aldermen sworn in were Ward 1 Alderman Robert Williams, Carolyn Wands in Ward 2 and Darren York in Ward 7.

Williams and York said it’s an honor and privilege to serve.

Wands said her prayer is to be an example to others in the community, not just by word, but by deeds.

She said an alderman should be truly involved and believe in what they’re doing.

Ward 1 Alderwoman Brenda Brown welcomed the new aldermen, and said she’s excited to see the most female aldermen it’s had — six of 14 aldermen on the city council.

“I’m excited about that. I look forward to working with each and every one of you,” Brown said to her fellow aldermen.

Ward 6 Alderman Bob Iverson, who was again elected as vice mayor, said it was great to hear the new aldermen’s enthusiasm and speaking about being leaders and examples for others.

“We’re going to have a great team,” Puhr added.

Mayor Williams also said the city’s made some good progress, with blight removal and crime trends going in the right direction.

He wants to see more graduates stay in Danville or return here, and have Danville be more of a place people are proud of.

“I want Danville to be a destination,” he said, adding that in five to seven years, the city could be that place.

Outgoing aldermen were to be honored Tuesday night. Sharon McMahon, R.J. Davis and Dan Duncheon were not present at the meeting.

The new council’s first action item was to approve Mayor Williams’ proclamation of A Day of Fasting and Prayer for Wednesday, May 5.

Aldermen also were divided into committees.

Aldermen heard another public comment from Christopher Hanson of Urbana about new Corp. Counsel James Simon and issues in Urbana with limiting speech.

Pickering also asked why burned out houses, such as the one on North Gilbert Street near Carle, haven’t been demolished yet.

Williams said legal processes can take longer than city officials would like.

In other reports, the Holiday Hills Neighborhood Association meets Thursday night; and a CSX railroad crew was on site at the Seminary Street overpass on Monday. City Engineer Sam Cole said there’s no timeframe for repairs, but he said CSX could have something completed in the next month.

Strebing also reported the Gao Grotto will have fireworks on June 26 and 27.